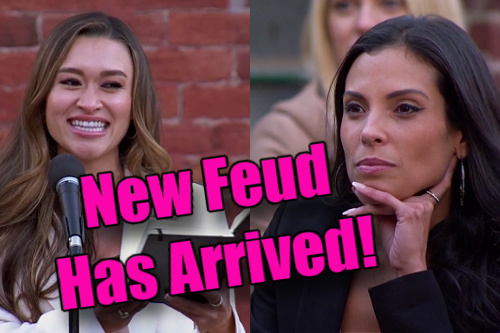 This week’s episode of “The Bachelor” picked-up where last week’s episode left viewers wondering who was going home from the two-on-one date with ‘Bachelor Clayton Echard.  Would it be Genevieve, or Shanae, who so far, had outlasted all of her rifts with the other women in the house.

The date took place at Niagara Falls in Canada.  The women back at the hotel were hoping for the best outcome, which was for Shanae not to return from the date. Marlena called Shanae a “chameleon” and she’s able to adapt to do what she has to do.

The two-on-one date card read: “Into the falls our journey goes.  Only one will come out with a rose.”  In fact, Clayton did end up keeping one women and sending another one home.  In some past two-on-one dates, both have a chance at going home.

Clayton talked to Genevieve first who got emotional while telling him that this week has been tough, and now with the two-on-one, that makes it even more strange and stressful.  She told him that she was sorry for not being more open to him.  “If you have any questions about anything, I would hope that you come to me.”  Clayton appreciated that.

Clayton told Shanae that when they’re together, they do have a good connection.  Then, he asked her how things were going with the rest of the women since her apology.  Shanae said it’s been good, except for Genevieve who packed her bags and wanted to go home the night before.  Shanae claimed that Geneieve says one thing and does the opposite.   Shanae threw out to Clayton that Genevieve gives off an “actress vibe.” 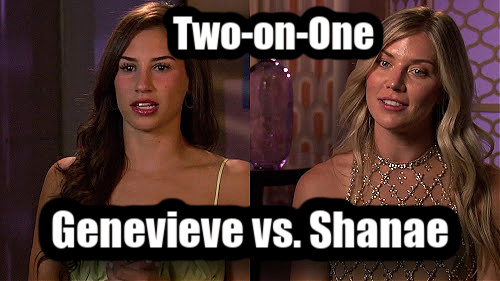 Later in Shanae’s confessional, she was praising herself for bringing-on the “tears.”   It seemed that Clayton was coming around to Shanae’s side of the date.  “Getting this rose tonight is going to be better than sex” Shanae said in reference to her expectations to send Genevieve home.

Clayton had reached a decision on who to give the rose to.  He told Genevieve that it helped him to understand a little more of where she’s “coming from.”  Then he asked her if she’s an actress, and “are you lying to me?”   She was really thrown off by this question and told Clayton that it was shocking to her.  She asked him where was that question coming from? Then Clayton had to step away to process everything.

Shanae told Genevieve that she thought she was going home.  Then Genevieve told Shanae that she’s the actress.  Clayton told the two women that the rose will go to the one who helped him see the truth that day.  He told Shanae that he just couldn’t find it in his heart to give her the rose,  then walked away with Genevieve.  For the first time Shanae was speechless and sat in silence.

Back at the hotel:  The women celebrated when they saw Shanae’s suitcase being collected.  They The women felt a huge weight was lifted by not having Shanae there anymore.

Clayton said he was happy to continue to grow along with the relationships there.  He said he heard them all singing on the elevator on the way there and thought that was encouraging.  Sarah was the first woman to pull Clayton for alone time.   Sarah asked how he was.  Clayton said arriving at that decision to send Shanae home was not easy.   Sarah thought she’d get a rose just based off of their connection.  When Clayton spoke with Rachel, he said “it’s so comforting” to be with her.”  Clayton said he’s just now realizing how serious things are and “it’s really exciting.”   Rachel said she’s falling for Clayton in her confessional.

Mara got alone time with Clayton next.  But, her taste test she gave him of Canadian food was cut really short when Serene interrupted them.  Mara was visibly upset and went outside to cry.  She was feeling defeated by the whole experience and the lack of building a closer connection with Clayton.

Clayton opened up with that the week had been challenging for him, and at the ceremony, he’s just following his heart and doing what’s best.

Clayton told the women that he was so thankful to have them all there.  They’re ready to leave Canada, and were going to one of the most beautiful and romantic places in Europe which was Hvar, Corsica. 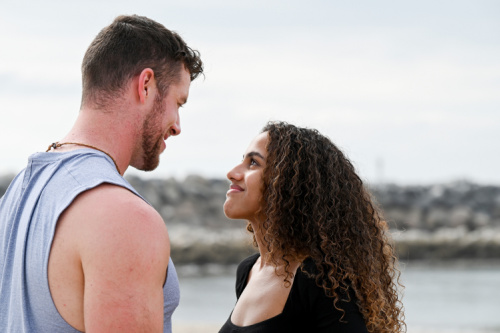 The women were so in love with the scenery in Corsica upon their arrival.  Clayton joined the women to announce that he was there to take one of them on a one-on-one date.  That girl was Teddi, and Mara was greatly disappointed.  Sarah said “it’s getting more serious, and he’s diving a little deeper.”  Then a storm started.

During their date, Teddi said in her confessional that she was planning on telling Clayton something and hoped that he’d take it okay.  Pretty sure she’s referring to her virginity.  During dinner, Teddi popped it on him.  She explained that she is a virgin, partially because her mom had her at a young age.  But, she is a sexual person.  Teddi told Clayton that she isn’t going to wait for marriage. But, she’ll wait for the first time that she’s in love.

Clayton said it’s more about the connection that they have emotionally.  He asked her if she’s been in love from that point.  Teddi said she’s never been in love and she didn’t want to get hurt.  Clayton said the risk of falling in love is that you have to be fully vulnerable and it seems that Teddi has put some walls up.

Clayton asked her if she’s never been in love, then how will she know when she’s at that point?  Teddi said it’s partially about her feeling safe, and she does feel that she could fall for Clayton.  Clayton was happy to hear Teddi say that and it could be “special” if he is her first guy that she falls in love with.  But, it’s also extremely important that he makes sure it’s her.  Clayton said he feels good about giving Teddi that date rose.  Teddi said she hasn’t “felt this way ever.”

Back at the hotel:  The date card arrived which read:  “Serene, Rachel, Susie, Gabby, Eliza, Genevieve, Mara.  It’s an honor to fall in love with you.  Love Clayton.”  That meant that Sarah got a one-on-one date.  It would be her second one-on-one date with Clayton.  Mara was really upset, stating that he’s literally going for the youngest girl in the house who isn’t ready for marriage. 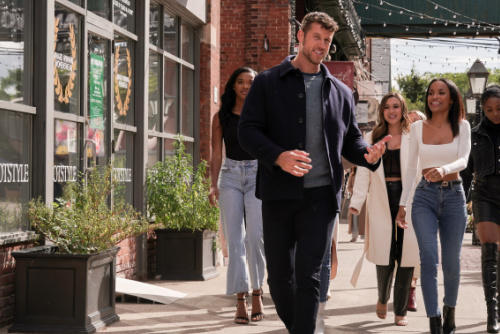 Clayton said it was the first group date without Shanae, and there will be no tension and no drama.   The women arrived to Clayton who was wearing all black and then saw two Knights fighting with swords.   One of the Knights was a woman who said Corsican women have stood shoulder to shoulder with men in fighting.  She told them to go choose a suit as the warrior that they want to be on the battlefield.

After the women stood their ground against each other, they were presented with some warrior Corsican food that included fish eyes, pigs liver, cows stomach.  Next, the ladies had to kneel before Clayton to tell him their oaths and promises to him.  Mara came-up with a catchy poem.  The women who “embodied a true knight” was won by Serene.

Clayton spent some alone time with Rachel where she confessed to him that she was “falling so hard” for him after he checked with her if they were on the same page.  Rachel told Clayton that she would love to bring him home to her family.   Clayton said Rachel is the first woman that has told him that she’s falling for him.

Mara was super frustrated that Clayton was giving most of his attention to the younger women in the house.  She sat down with Clayton to lay it all out.  She told him that she’s given her all to him and the roses that are being given out, it doesn’t match-up to what he said he wants.  She was aggravated that Sarah has gotten a second one-on-one and someone like her hasn’t gotten one, one-on-one.  She pointed-out that some of the younger girls said that they couldn’t even picture getting engaged.  Clayton told her that he will be paying closer attention moving forward.

Clayton said he’s giving the rose to someone who opened-up his eyes, and left their mark on him.  It was Rachel again.  Later that night, Clayton received an anonymous note that read to meet them at the clock tower.

It was Susie that met Clayton at the clock tower.  It was her attempt to get closer to Clayton because she was scared of losing him.  In her confessional, Susie said he’s the kind of man that she’s dreamt of and she does see a future with him.  Clayton was so surprised and didn’t know what to expect.  Susie said she wanted to share how she was feeling with him.

Susie told him that seeing him form other connections, it made her put up walls that she otherwise wouldn’t put up because it’s possible that she may get hurt in this.  Susie said the purpose of meeting him was to be vulnerable.  She then said even though there is still a lot of time left, she does feel that she’s falling in love with him.  Clayton was super happy.  “this is the happiest that I’ve been on this journey” he said in his confessional.

Clayton had a chat with host Jesse Palmer.  He was concerned that Sarah was expressing that she’s not ready.  He said he’s scared of choosing someone who is going to leave him at the altar in the end.  Jesse said he had the same concerns when he was “The Bachelor” advised Clayton to just trust himself.  Clayton and Sarah talked during dinner.  The first part of their date was not shown. 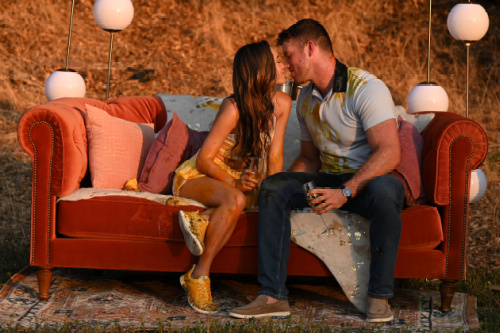 Clayton told her that he made it clear that since night one, he wants to find his future wife and propose at the end of it.  He told her that it was brought to his attention that people may not be ready, and not possible for them to be ready for an engagement, and they were speaking about her.  “Do you see it as a real possibility that you could be engaged at the end of this?”  Sarah responded that she could really see a future with him.

Clayton said he’s really confused and is afraid of giving, only to have everything taken away from him in the end.  On that note, Clayton took some time to himself and stepped away.  Sarah broke down in tears and was really upset that someone made-up a lie about her.  She said she has feelings for Clayton and wants to be with him.

After Clayton returned, Sarah told him that she’s trying not to be angry.  She didn’t want to say anything negative but couldn’t help but feel it was interesting timing that someone brought it up after she got a second date with Clayton.  It was “so out in left field.  So extreme.  A blatant lie.”  Clayton said he could tell that Sarah was sincere, and so he gave her the date rose.

Before Sarah walked back into the hotel where the women were waiting.  It was “to be continued” to next week!