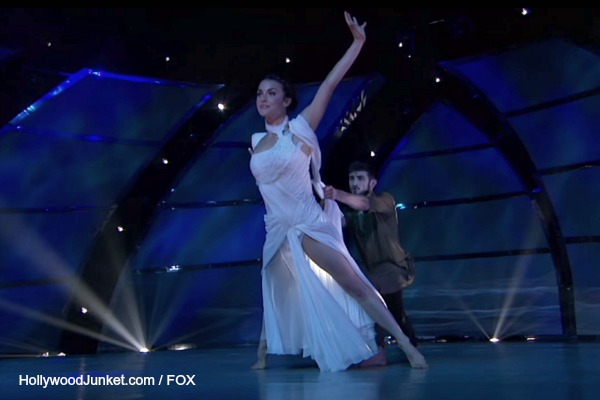 Each dancer had to learn six different dances in tonight’s “So You Think You Can Dance” Top 4 episode which judges called it the “finale” show. This is the show that will ultimately determine who will be voted as “America’s favorite dancer” and win SYTYCD season 11. Votes from this week and last week live shows will be tallied to determine the winner in next week’s live finale which will be more of a celebration.

The guest judge was Jesse Tyler Ferguson from the television sitcom “Modern Family. He was very vocal about what he thought of the routines and the dancers themselves. He also exposed two of his SYTYCD dancer crushes tonight. Two of the most powerful routines of the night touched on domestic violence and suicide. Nigel found himself defending his comments later that night to press about what he said after Ricky’s routine with All-Star Kathryn McCormick. Watch his full interview here: http://hllywdjnkt.co/1pCei8W 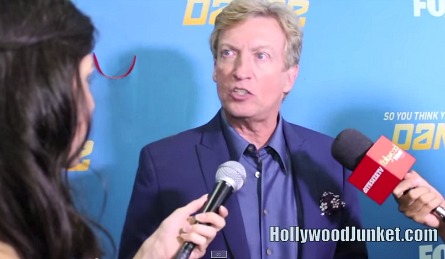 RICKY, VALERIE
First up were “Rickerie” or Ricky and Valerie to perform an African Jazz routine choreographed by Sean Cheesman. Nigel noted that African routines require so much stamina. “Losers quit when they’re tired. Winners quit when they’ve won” is what he told them. Mary said the number is “animalistic” and told them that they “hit it out of the park.” Jesse joked “African dance is the dance I trained in.”

JESSICA, ZACK
They performed a Broadway number by Spencer Liff. Mary said “you guys were very cute,” and called Jessica “stunning” when she came down those stairs. She complimented Zack on his legs too! Jesse said he did ‘On The Town’ in 1998 and the dancers on that show would have a run for their money. Nigel said the routine was like Bob Fosse, and that Broadway numbers have been “fantastic this season.” He called Zack one of the most gifted dancers, and told Jessica that she’s moved from being a girl on the show to a beautiful woman. 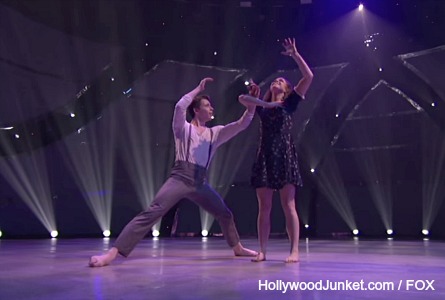 The two tap dancers Zack and Valerie had to dance a contemporary number choreographed by Tyce Diorio where Valerie had to pretend that she was blind. Jess told them “Tyce presented you with an acting challenge. You sold it!” Nigel said “I love the fact that our choreographers touch on different topics. No matter how much we can see, we are blind to the emotions around us…it’s remarkable and really touches us.” Mary told them without a doubt, it’s no longer a surprise that they’re standing on the stage right now. “The honesty in you guys, I love you guys!” Watch their performance and interview here!

JESSICA, RICKY
They danced a Jazz routine by Ray Leeper. Nigel told them “as a couple, you just compliment each other” and compared them to Cleopatra and Marc Antony. “They fit perfectly, like a puzzle.” Mary said “It was so clean and precise…full of power.” She told Jessica she took off with the help of Ricky and called it “flirty and wild.” Jesse called them “adorable sprockets.” He said he didn’t know what else to say except to take a selfie. He took a selfie in his seat with them in the background. 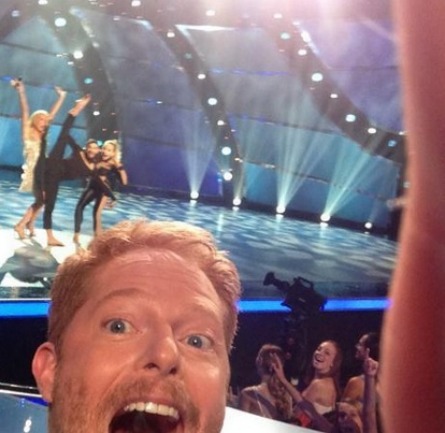 SPECIAL GUEST PERFORMANCE – Jason Mraz
He performed “When You Love Somebody.” Jason had a track in season 5 during a Travis Wall routine.

JESSICA, VALERIE
The Top 2 girls Jessica and Valerie performed a Bollywood routine by Nakul Dev Mahajan. It wasn’t the best Bollywood routine, and the judges kept their comments light,. Mary said “Wow! you guys couldn’t look more adorable! You’re two Bollywood divas up there!” Jesse said “I think I lost eight pounds watching that.” He also commented that they met the basic requirements of doing Bollywood like a clean face so that the head dressings and beads stay stuck onto their foreheads. Nigel said “It puts a smile on my face every time I see it (Bollywood).” 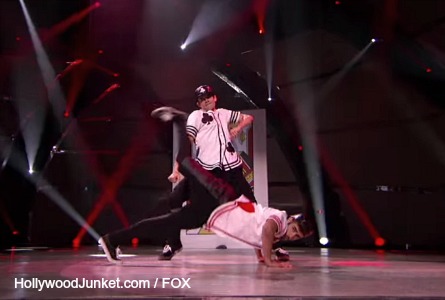 One of the best numbers of the night choreographed by Christopher “Pharside” and Krystal “Phoenix” called “Crown Favorites” had Zack and Ricky doing Hip-Hop. The judges gave them a standing ovation. Jesse said “so glad someone has the nerve to bring to the stage Nigel and Mary,” he joked of how they fight. He said they were “spectacular,” and “I’m losing my mind.” Nigel said they are the last two likely Urban duo. “But once you’re a great dancer, you can do anything.” Mary said “Was that tight or what?” and she said they blew them away this week. “You are both kings tonight on that dance floor.” Watch their performance and interviews here! 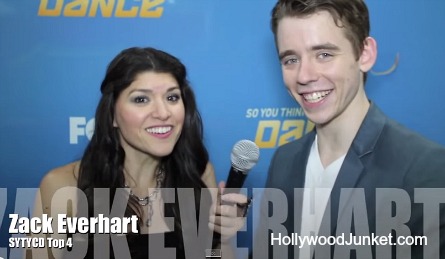 VALERIE, All-Star Aaron Turner
They danced their specialty – a tap routine! It was choreographed by Anthony Morigerato, and boy was Nigel happy about that! Nigel said “I am so full of love tonight….maybe because Anthony Morigerato is in the room!” He continued, “more than anything in a tap routine, I love Valerie Rockey.” Mary said “it’s been a great night so far and it’s just continuing.” She said he Twitter had been going crazy about bringing Aaron back! Jesse said he had a crush on Aaron and it hasn’t gone away. “I’m so thrilled to see Valerie do what she does,” and tried to compare her to the Michael Jordan of dance. 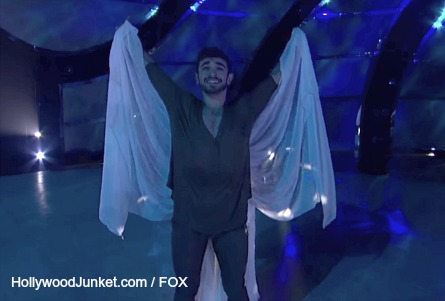 Their contemporary number was choreographed by Stacey Tookey. They also got a standing ovation. It was a very special and emotional performance where Kathryn played the character of Ricky’s angel. Mary said to Ricky “Once again, you proved why you’re standing here tonight at SYTYCD finale.” She said he was “spot-on”, and “you both are kissed by an angel!” Jesse said “we don’t give away standing ovations easily,” then sang “Oh, Ricky you’re so great. If you were older we could date!” Nigel said “if anyone lost anyone due to stupidity of suicide, there’s always someone there. It’s not right. Everyone has an angel waiting to help them.” Nigel said he lost two people close to him due to suicide. He told Ricky that he’s going to be a great addition to the dance world and a great ambassador for SYTYCD. Watch their interviews here!

ZACK, All-Star Aaron Turner
Aaron danced with Zack doing what they’ve been trained to do best – tap! The routine was choreographed by Anthony Morigerato. Jesse was impressed by Zack “You’ve taken everything thrown at you and have grown in so many ways! You’re such a brilliant dancer.” Nigel took the words of previous guest judge Christina Applegate saying to Anthony “Shut your mouth!” He told Zack, “You and Aaron tapping together was just wonderful to see.” Mary said to Zack, “You’ve been laying that passion out every week.” 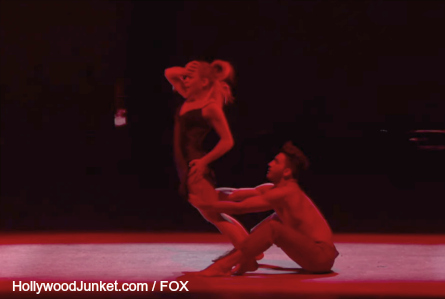 In another emotional piece – this contemporary number was choreographed by Travis Wall. The dance routine was about an abusive partner. Nigel called it “another incredible Travis Wall routine,” and said to Jessica, “I love that moment when he put his hand around your throat and you said ‘No’. You’ve become a great actress as well.” Nigel ended with “I absolutely love you and I think you’re our best girl this year.” Mary said “you were fire on that stage! Every single thing you did was greatness!” Jesse called it his favorite one of the night. Watch their interviews here! 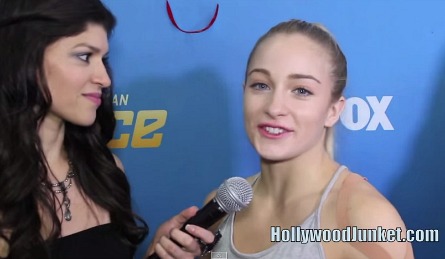 Jessica talks about the SYTYCD final week and sends a message to fans!