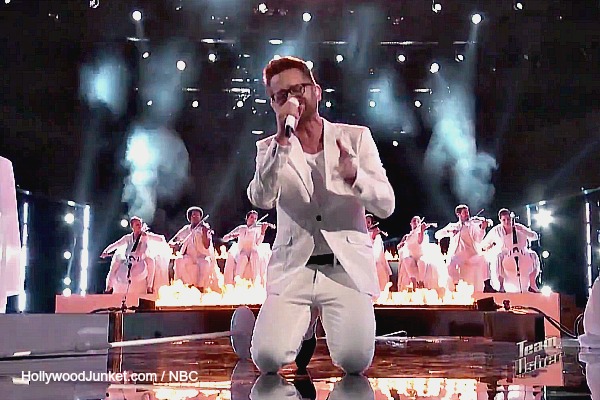 The Top three of “The Voice” season six performed tonight to solidfy their chances of gaining the most of America’s votes in order to win the title of “The Voice” champ for season 6! Each artist performed two songs tonight. One was given to them by their coaches, and the other one was voted as fan favorites, or “America’s Pick” songs which were ones they had sang before during the season, but that their fans wanted them to perform again.

Blake is getting used to Adam’s new blond hair-color, and compared him only to one other blond star tonight. Adam labeled Christina as this season’s winner. But, when Josh closed the show tonight by performing an Adele song, he may have taken that title away! Jake was called “a true country artist.”

The coaches each performed with their artists.

Coaches Comments:
Blake said, “I’m not surprised that America picked that song because it’s an opportunity for you to hit all those big notes.” Usher reminisced, “that song takes me back to the beginning when I was trying to fight to have you on my team… When you’ve been on the bottom, you constantly fight to stay on top.”

Shakira told Christina, her skill is her upper register. She said “it’s insane” and she knocked it out of the park.” Coach Adam said, “I’m so proud of you, you came out today and even though you did the same song I think you did it better, if that’s even possible. I was totally taken away from the competition aspect of it.”

Twist The Knife:
JOSH KAUFMAN – TEAM USHER
Usher told Josh, it wont’ be the last time that they work together for his career. They sang “Every Breath You Take”. Usher said to Josh, “No matter what happens, I”m going to continue to watch you.” Usher also told Josh he saved him too, “thank God I was able to save you, but you were able to save me too.” Josh and Usher performed the song together on stage.

Keenen Ivory Wayans and J.B. Smoove was in attendance tonight to promote the new season of “Last Comic Standing”. He said they’ve revamped it, and have taken it up a notch with the best of the best comedians and it’s a competition with no restrictions.

Josh performed America’s Pick: “Signed, Sealed, Delivered, I’m Yours” by Stevie Wonder. After his performance, Usher stood up in praise of Josh.

Coaches Comments:
Shakira said, “You have a voice that has such charisma and it’s so dynamic and so many facades that no one could ever get bored listening to you. It’s unbelievable that you almost went home after singing this and thank God Usher saved you . You are a jewel on this show.”

Adam said about picking Delvin Choice over Josh Kaufman earlier in the season during the battle rounds, “then you have to go and twist the knife that takes me back to that moment during the battle rounds. That battle must have been epic!” Josh said he even took a little thing from Delvin. Adam said “I heard it!”
Blake said nothing makes him happier “to see Jennie Garth (Adam) down there struggling, knowing that he let you go . You ad-libbed the crap out of that too. It was awesome! Great job!”

Usher told Adam, not to beat himself up too much . He sang a song that “signed, sealed and delivered” Josh to him . I think your idea was right that the voice does need something new, something soulful. “He IS the new voice of ‘The Voice.'”

Coaches Comments:
Usher noted, “It’s always a pleasure to hear Jake sing. He’s a person that came to the show, not successful, and came back and now is in the finals. True to his dedication and to the coaching.”

Shakira called him the guy she wanted to “squeeze”. She said, “You’re the guy that fellow coaches wanted to grab a beer with I just wanted to squeeze you. You’ve now gained credibility,” she said especially with that performance. Adam said, “I don’t want to squeeze you. But i still love you very much. You do introduce a new element with settlety and not trying to break glass (Ummm….Sisaundra).” He continued that it’s more important for a singer to have a memorable tone.

Coach Blake praised Jake for paying tribute to great country artists such as Keith Whitley and others who are no longer with us, but are country legends. “Thank you for continuing to do that,” stated Blake.

Jake said every red-neck’s dream is getting to hang-out with Blake Shelton and Miranda Lambert.

Christina Grimmie & Adam Perform!
Studio time is a step up Adam told her because she started off playing music in her home for YouTube. Adam said what made him most proud is her because she did a lot of things that were fearless and bold to get her to the finals. Adam said the song is “perfection” for them to sing. Adam and Christina perform “Somebody That I Used to Know”

Jake’s second performance:
Usher – You were in jail when you started,” then he said, “it was a spotless performance. It’s about the emotion and identifying what it takes to perform that song, is a true artist.”

Shakira noticed Jake’s talent growth, “you are really singing amazingly well. I can hear power in your voice that I never heard before. Nuances, …very charming.
Adam agreed, “that’s true. I notice that same thing. You do this masculine…Blake, can you teach me…’YEP”. Blake said “after the show!” Adam told Jake that the nuances are amazing and that Jake has come a long way.

Blake said, “six seasons of being a coach on the show, and just a viewer of the show, there’s never been a more honest and sincere messenger of a lyric than you. When you come on the stage and sing something, people are engaged. That’s a trait that only a true country artist has. Thank you for bringing that back into country.

#VoiceAskAnything
Shakria said Blake is one of her most favorite male singers today!

Coaches Adam and Usher sing “How Does it Feel”

Warrior Spirit:
Christina Grimmie – TEAM ADAM
Adam said about Christina, “This girl has this warrior spirit to make it in this industry.” Christina said her choosing to sing “Can’t help Falling In Love With You” by Elvis Presley, “It’s my dream song I know since the Blind Auditions if I make it to the finale, I want to sing that song.” Adam said she should do extended notes. She said the end of the song will show the audience why she’s in the final three.

Blake was impressed, “I always admired your risk to take chances.” He called Elvis the “biggest risk” she could take on the show.” Usher said, “To go after a song like that is really courageous and the arrangement was great. You’ve got a great coach.”

Shakira didn’t hold back, “That was flawless, I was in complete awe. It was neither a conservative choice nor an obvious choice. That’s your trademark. you put your stamp on everything you do.”

Adam called-out Blake and Usher, telling Christina not to pay attention to them, “the underwhelming commentary from Usher and Blake is self-protection.” Telling them, “You can’t freak out too much you still have horses in the race.” Adam told Christina, “your vocal I wanted it to be louder. You can’t get any louder. The great choice that this girl has made, she has made on her own. This is yours. I think you are going to win this show!”

JOSH KAUFMAN – TEAM USHER
Josh finished off the final night of “The Voice” by performing “Set Fire to the Rain” by Adele.

Adam had to wait for the crowd to stop cheering in order to respond, “I have five seconds now. You’re super amazing! Time’s over!” Adam couldn’t fit his comment in, but Usher has loads to say!

Coach Usher was ecstatic, “OMG! Throughout this process, you have wanted to represent soul. That is who and what you are. You represent something different. Something that is courageous, that changes the standard. The destination is the journey. You’ve been up and down, lost and found. You made it to the top 10, one hundred songs in the country. This is the representation of what the voice is. You are the winner of this competition!” 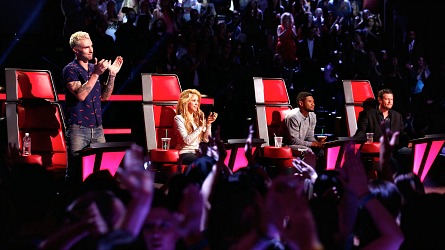