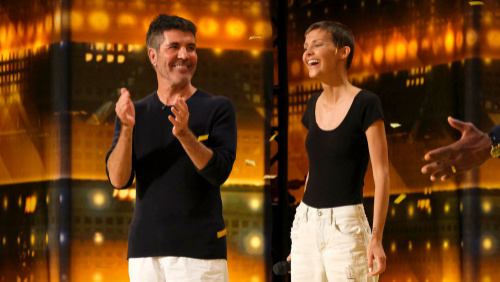 In the second week of “America’s Got Talent” season 16 auditions, the judges – Simon Cowell, Howie Mandel, Sofia Vergara, and Heidi Klum, saw more amazing talent acts than not.  Halfway into the episode, host Terry Crews asked the judges what they want to see in an act.  Simon said he likes to be surprised, and Heidi said she wants to be “wowed!”

There was definitely no lack of surprises in this episode, and some acts had that “wow” factor!  Specifically an unexpected singing act, an unexplained magic acts, and an escape artist, that were followed by many more talent acts full of surprises.  Most good, and only some bad.

The episode ended with a memorable singing act that truly touched everyone and Simon Cowell was the most affected..giving her his Golden Buzzer.

A group of young girls dressed in glittery dance costumes came out onto the stage.  When asked about who their dance teacher is, they introduced Justin (Alyssa) who came out from backstage.   Justin is a drag Queen.  He said he has a lot of people in Mesquite Texas that support him where he does his shows.   As a child, dance was the only way he found to express himself.  He put together this dance crew of seven young girls.
Simon reacted that he thought the act was “absolutely sensational” and asked what they’d do with the money if they won.  One girl said she’d have an operation on her spina bifida.   After their performance,  Howie said they were “fierce” and the littlest one was a “super-star.”  The dance crew received four “yes” votes.

A group of four, who are usually a group of twelve,  from Japan did a unicycle routine and amazed the judges and audience.  Sofia said the “energy and music. It was so exciting.”  Heidi said she loved the choreography and they were so in-sync. Simon said they said it’s normally 12 people,  but it was amazing with 4 people and he was “blown away.”

“Larger than Life” is a four-member boy bad made up of  Edvin, Chris, Price, and Dan, Their ages ranged from 30 to 39.   They always wanted to be in a boy band and they made their own.  One of them said getting a Golden Buzzer would be so much and having a residency in Las Vegas.  Simon asked do they believe they can win the show?  They said “yes.”

They preformed a mash-up of In-Sync and the Backstreet Boys. Simon buzzed them within the first few seconds of hearing them.  Heidi buzzed them next, then Howie.  When they were done,  there was no applause from the audience.  Heidi said she wanted it to be great for them.  But, it didn’t.  Sofia said “it was forced…but I didn’t want to give you an ‘X’.” She said that was drastic.  Simon said “when you’re terrible, I would just give it up.” 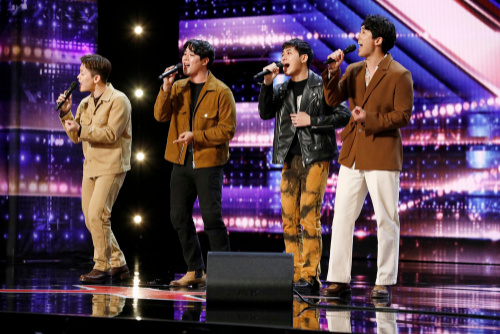 They arrived 10 days ago.  Simon asked “are you well-known in Korea?”  They said no and they really want to be Pop Stars.  The group harmonized nicely as they sang “All My Life” song.  Howie reacted “amazing” and they checked a lot of the boxes that they need to make it.  Heidi said the harmonies were beautiful and it was “silky, smooth.”   Sofia told them that they make a great group together and they have “all the talent.”  She thought it was spectacular.  Simon called them “one of the best auditions we’ve had today”  He said the harmonies were great, the song choice was great.  It was four “yes” votes for them.

From England now living in Vancouver.  He’s an escape artist.  He said his wife asked him to never perform the stunt again that he was performing for his audition.  He said he  Hung himself and drowned himself at the same time that put him in the ER.  He said he’s there to face his fear, and told the judges that he’ll perform that same stunt for them.

Matt used a straight jacket and hung himself Matt got a standing ovation from the judges and the audience.  Simon said “anyone who put themselves in this position…that could have been catastrophic. But you are brilliant…respect.”  Sofia as so nervous for him and it hurt her stomach.  Heidi told him to listen to his wife a little more.  Howie said he’s never been more scared looking at the contraption and listening to the amount of time Matt didn’t rehearse.  They all said “yes.” 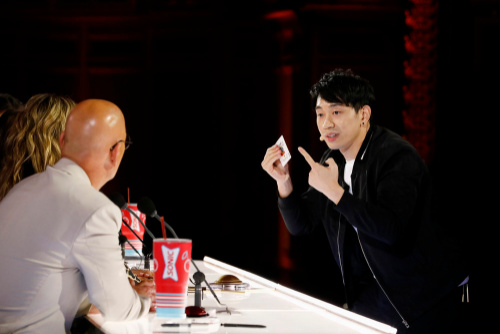 He said it’s always been his dream to have his own show in Las Vegas.  Patrick said he’d order something online and have it shipped to his friend’s house, then take it home and practice every day.  His dream is to do magic for the rest of his life.  “America’s Got Talent I think will change my life” said Patrick.  He’s from Pittsburgh.  Patrick joked to Simon that he sold his soul a long time ago.

For his act, he joined the judges downstage.  He brought a new deck of cards, still wrapped.  Simon was given the deck to unseal.  He threw out the joker and ad cards.  Simon shuffled the deck.  The judges got their own cards to sign – ace of hearts, clubs, diamonds, spade.  He made the cards disappear and reappear on top of the judges’ table numerous times.  But the kicker was when his act ended with making a brand new SEALED deck appear.  When Simon opened this one, the deck included their signed cards!

Heidi reacted that it was incredible and “how on Earth?”  Sofia called it mind-blowing.  Simon said there are some things that can not be explained and that means “it’s magic.”  He also gave Patrick props for his presentation.

Johnny is 40-years-old.  He has an entourage who performs with him.  They make-up his adviser and “the truth.”  Johnny said, “they said fake it ’til you make it.  I’ve been faking it for a long time.” He said he thinks this is his time now.  Johnny ended-up performing an original,  catchy tune that the judges and crowd enjoyed.   Simon, Heidi and Sofia actually gave them a standing ovation. 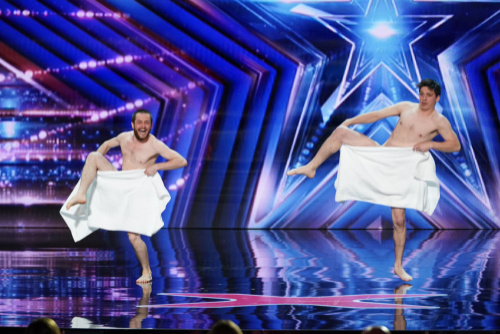 Simon reacted, “you were so annoying.  Then the act started and it was brilliant”  He said one of his favorite acts.  Sofia enjoyed it and it was “surprising.”  He transformed himself into this fantastic thing he said.  Howie said the key thing is when you can move the audience and transport us.  He said it was kitchy, and he loved it.  They got all “yes” votes.

Their a family of seven.  The dad said they vibe with the golden age of music which was from the 50s to the 70s.  They’re from San Francisco.  Simon named one of the kids guitar “moon” when they asked him to name it for her.

They were fantastic and Simon said “I love them so much!”  Howie said they’re a beautiful family, they’re super-stars and they inspired him.  Heidi said they sound as good as they look.  Sofia said she’d love to see them again and they’re on the right track.  Simon asked if they’re in the music business.  Her husband plays all the instruments and taught all the kids.  He played with Earth, Wind and Fire.  Simon said they all looked like they were having a great time and the kids didn’t act as if they were forced into it.  They got all “yes” votes.

Before the next act, host Terry Crews asked the judges what they wants to see.  Simon said he likes being surprised.  Heidi wants to be “wowed!”

Danny is a contractor at an HR department.  He started to play a tune on the side of his mouth by hitting a pencil on his cheek.  He quickly received four buzzers from all the judges.

They are French Canadian circus artists.  They walked backstage.   Then came back out without clothes, only holding towels in front of there private parts.  Their act consisted of choreographed movements around the towel covering them.

Howie said to keep going and doesn’t want them to “throw-in the towels.”  Heidi said it was a wow for her and ti’s her cup of tea  Sofia said she thought it was fantastic and can’t wait to see what else they take off.  Simon said that’s what we call surprises.  They got four “yes” votes.

Gina is 41-years-old, Stand-up comic.  She was born and raised in the South Bronx.  Gina said she did odd jobs to help her family pay the bills.  When she discovered comedy, “it was like that moment in Cinderella when the shoe fit.”  She didn’t mind working every job under the sun during the day to pay the bills so she could do stand-up at night.  Gina said becoming a mom changed everything and wants to show him to live you dream.  ‘”I’m here to win for my son. I’m here to win for my family.”

Gina got a standing ovation from the crowd and the judges.  Sofia called it “a great surprised” and laughed at every joke.  She loved it.  Simon said “I felt like you were just having a conversation with us.”  Heidi said “I wish your husband was standing right here when you were talking about him.”   Howie called her ‘”beautiful, funny” and checks every box a comedian can check.  Sofia said it felt so “effortless.” Gina got all four “yes” votes.

Jane is 30-years-old From Ohio and sang an original song called “It’s Okay” about the last year of her life.  Jane has cancer and told them that she hasn’t been working for the past few years because she’s been dealing with cancer. Jane told the judges that she currently has cancer in her liver and spine.  “It’s important that everyone knows that I’m more than the bad things that happen to me,” she said before performing.

Jane got a roaring cheer from the audience after her emotional and powerful performance.  Everyone, including the judges were on their feet.   Howie said “it felt like the most authentic thing I’ve heard this season.”  Sofia called it powerful and heartfelt. Heidi said her voice was so beautiful to listen to.  Simon said her voice is absolutely stunning.  I agree with what Howie said about authenticity.  He said there something about that performance when she told us what she’s going through.”

Jane responded, “you can’t wait ’til life isn’t hard any more when you decide to be happy.”  To that Simon said they’ve seen a lot of really good singers, and “I’m not going to give you a ‘yes’.  I’m going to give you something else.”  Then Simon pushed the Golden Buzzer.  He joined her on stage to give her a hug.

Backstage, Jane told Terry Crews that she has a 2% chance of survival.  “Two percent is not zero, it’s something.”