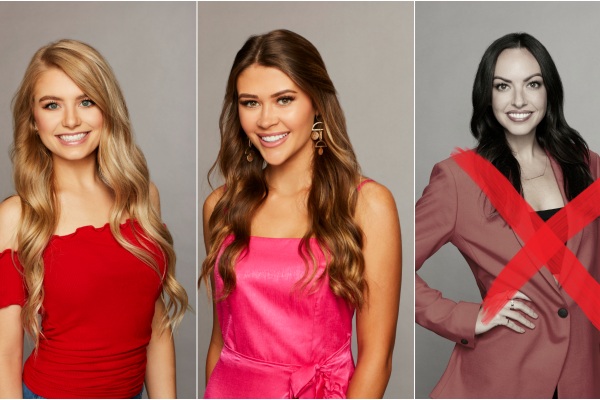 Last week’s episode of “The Bachelor” is where the drama began between two beauty queens Caelynn and Hannah B. Colton was caught in the middle, not knowing what to do other than give a group date rose to Caelynn. This week was no different, only the drama carried over to Singapore.

To add fuel to the fire, when host Chris Harrison entered the mansion to make an announcement, he called Hannah B. “Caelynn!” She said “there were things said about me that shouldn’t have been said about me” and she’s “tired” of talking about it.

Harrison had a nice surprise for the women when he said the “bad news” is that “there is no date today” because they’re going as far around the world a they can go.
They’d be going to a place they’ve never been in the history of “The Bachelor.” That was Singapore. AND, they had only one hour to pack.

Colton thought Singapore was “a cool place” and ready to “find love.” He said with Caelynn and Hannah B., he has to treat it as it is in that they’re not going to get along with each other.

Little did Colton know that with this week’s trip to Singapore, he’d be in for a bumpy ride as his dates came to him with some unsettling and personal revelations about themselves.

Tayshia got the first one-on-one date in Singapore with Colton when the date card arrived and read: “Tayshia, let fall in love. – Colton.”

Colton made a selfie video talking about going on a date with Tayshia. He said their relationship is not as far along as the others. “Falling in love” represented them going bungee jumping. Tayshia said she “doesn’t like falling.” After much hesitation, they both jumped. Colton went first and scared Tayshia as he yelled “like a little girl” while dropping. After Tayshia jumped and Colton comforted her afterwards she said it’s been a long time that she’s felt that comfortable and open with a guy.

Tayshia droppd a bomb during her dinner with Colton that she was married to her first boyfriend and had a divorce from him. Being a Christian, she was extremely disappointed when it didn’t work out and expected to be married only once. Colton revealed that he has divorced parents and he can’t be the one to “judge happiness.”

Back at the house: The second date card arrived. It was the group date with names: Hannah G., Elyse, Kirpa, Sydney, Heather, Onyeka, Tracy, Nicole, Demi, Courtney, Katie, Cassie, Hannah B. The card read, “let’s get a taste of Singapore.” Hannah B. was clearly upset because one name was left-out which was Caelynn’s. That meant Caelynn was getting the second one-on-one date. Hannah B. wasn’t the only one upset about it. Demi was peeved as well, stating that Colton is giving more time to the drama between Caelynn and Hannah B.

Back to Colton and Tayshia: Colton gave Tayshia the date rose. As the two made-out, Tayshia’s voice-over played stating that if things keep going the way they’re going, she could definitely see herself falling in love with Colton.

The first stop of the date was at “the leech lady.” It was a therapy session to get rid of toxins and inflammations using leeches on the skin. Colton was the first one to try it out. Among the other women on the group date, Hannah B. noticed that Colton kept snubbing her and giving her the cold shoulder. She reacted that it felt like Colton was avoiding her. She thought it was because of what Caelynn said to him about her last week.

Hannah B. ate a fish eyeball in her efforts to impress and get Colton’s attention. During the date cocktail party, Hannah B was the first one to grab Colton for a private talk. The other women said “it’s been the elephant in the room.” They were referring to the riff between Hannah B. and Caelynn which exploded last week. Courtney hoped that they didn’t bring the drama to “another continent.” But, clearly, they did.

Hannah B. fed some B.S to Colton by stating that a man wants to know that the woman he wants to be with is “noble,” and he “knows who she is.” She wanted to get reassurance from Colton that they’re okay. Colton fed it right back by saying with today he felt that he got his Hannah back and he was hard on her because he likes her so much. They validated each other’s feelings with some kissing.

Colton said he and Cassie have an “undieniable” connection and feels that they’ve known each other longer than they have. So, there might be something into that soothsayer that they visited earlier in the date who told them they are brother and sister in a past life!

Courteny sat with the other women complaining of not getting some time or attention from Colton. While Demi told her that she needs to initiate. “You just have to act. Because if not, it’s not going to be good.” During Demi’s time with Colton, she told him about her mom getting released from Federal prison. Colton’s expression was stonefaced. 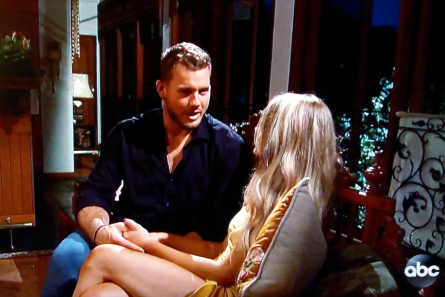 After talking to Colton, Courtney was still waiting for Colton to get her. Demi was fed-up with it. The other women told her she’ll regret it if she doesn’t go get her time from Colton. She finally got up and went. But, went to talk to Demi instead. WTF? Of course, an argument erupted.

Colton gave the group date rose to Demi for her showing a different side to him.

A chauffeur arrived to the women’s suite to ring Caelynn for her date. He delivered her a card which read: “I’ve been waiting for this special day for so long. Meet me downstairs. – Colton.” This was a Pretty Woman style date where Colton picked Caelynn up in a Bently and took her high fashion shopping at some of Singapore’s top high-end designers. The best part for Colton was that he got to ogle Caelynn in the outfits. 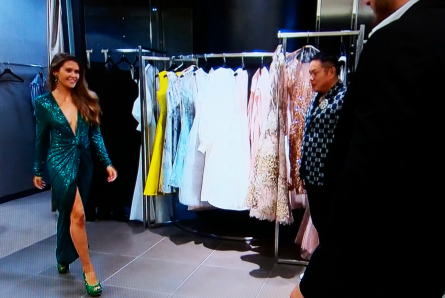 The women were incredibly jealous when Caelynn got back with all the shopping bags. Their date wasn’t over. Caelynn had a quick wardrobe change. She got into one of the dresses to go to dinner with Colton in. 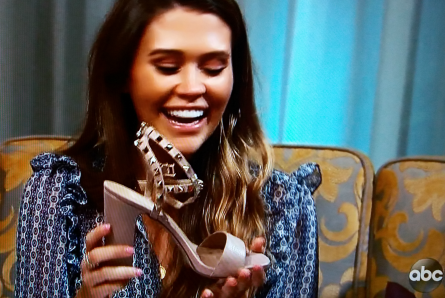 Pictured: Caelynn shows-off some of her goods from her date./ ABC television network copyright

During dinner, Caelynn opened-up to tell Colton that she has to have this conversation in her relationships. Something that’s come in between intimacies. Caelynn told Colton that she was drugged and raped in college. Again, Colton’s initial reaction was stone-faced.

Caelynn said she handled it by being determined to seek justice But, felt shame and guilt. “It screws-up every ounce of you.” She said even being touched on a shoulder by a guy would trigger it. She said she didn’t open-up about it for a long time and didn’t tell her parents for a while out of shame.

Caelynn told Colton that she feels safe and comfortable with him. Colton revealed that one of his past relationships with with a girl who was abused. He said it was the hardest thing to see the pain from it in her eyes.

The three women going-in with roses were: Demi, Caelynn, and Tayshia.

Colton said going into this, he’s going to be the “happiest, luckiest man.” Hannah G. let Colton know that she wants things to move forward between them and is going to open-up to him. Colton’s response was that he wants to know her more because he likes the way she makes him feel. That was followed by a steamy make-out session on top of his bed.

Caelynn pulled Hannah B to talk privately. She opened with that there’s “tension and unnecessary drama” between them. Caelynn begged that they be supportive of each other and let the past be in the past. Hannah B. accepted her apology and stated that “World War III was diverted tonight.”

Luckily, Demi already had a rose and used her alone time with Colton to complain about Courtney and told him she “attacked” her. She also described Courtney as being “the cancer of the house.” Colton was shocked and said nobody should be attacked or verbally abused. Then, in walked Courtney. But, after Courtney revealed that Demi is there to win and doesn’t care that Colton is the Bachelor. “It could be anybody.” That got Colton to question Demi and his relationship.

Courtney called Demi out on calling her “the cancer of the house” to Colton. The other women were laughing at the two women’s immature argument. Then, in walked host Chris Harrison to tell them that the time had arrived to have the Rose Ceremony.

Colton thanked the women to making it “a great start to an incredible journey.” The names he called to give roses to were: Hannah G., Heather, Kirpa, Hannah B., Katie, Elyse, Sydney, Cassie, Nicole, and Oneyka. Tayshia, Demi, and Caelynn already had roses from previous dates. 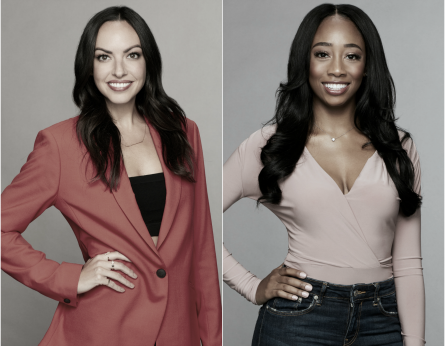 Next Week: The group of daters will be in Thailand. Colton with have a date with Heather and never been kissed, she wants Colton to kiss her. Next, he’ll have a date with Cassie. There’s more kissing with Tayshia and Colton. Hannah B tells Colton that she’ falling in love with him. Elyse said she made a “stupid mistake” after a scene of Colton in bed with one of the women. Amongst the women arguing of being put in a bad spot, Colton is seen walking on the beach towards the ocean.