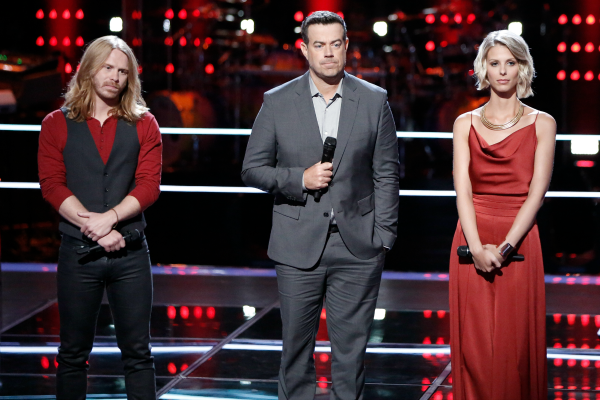 At the beginning of Monday’s night episode of “The Voice”, there were two coaches left with Steals in the Knockout Rounds. By the end of the show, only one coach with a Steal was left to be used for Tuesday’s final night of Knockouts. Key Adviser Kelly Clarkson took-on a second week of helping to shape each coach’s team’s artitsts. Clarkson’s inspiration is undeniable by many of the singers on the show. But, one artist decided to undertake one of Clarkson’s most difficult songs for the Knockouts. 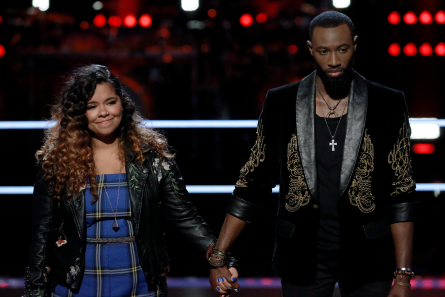 Brooke chose to sing “Natural Woman” by Aretha Franklin. She said it’s how her husband Ray makes her feel. “He’s my best friend in the entire world.” After Stephan watched her rehearse, he said he needs to “step-up” his game. Stephan chose “Impossible” song. He said it’s representative of his journey on “The Voice”. He forgot the words to his song during his Blind Audition. But, Jennifer still turned for him. Miley stole him in the Battles.

Adam said Stephan has a power to him, and Brooke, there’s no celilng to her because she got better since the Blinds. Blake said Brooke “slapped” that song and Stephan has the X factor. Jennifer said Stephan, it wasn’t easy to win the crowd over from Brooke, and he has a voice. Miley said she didn’t understand the level of talent with Brooke. Stephan’s voice was enough to over-power his mistakes.

Anna selected “Breathe” by Faith Hill because it shows-off her “lower house” vocals. Mitchell chose “I’ll Be” by Edwin McCain. Anna was intimidated by Mitchell because he was hitting notes, she said, she didn’t know males could hit. Kelly told Mitchell that his “attack” of the song was incredible.

Jennifer said Anna’s sound is so “pleasant” and Mitchell has a swag about him it’s like he’s at his concert. She preferred Mitchell. Miley agreed that it felt like Mitchell was at one of his own shows. She loved that Anna stayed true to Country music like Faith Hill. Adam pointed-out some pitch problems Mitchell had. But, said his performance made up for it. Blake said Mitchell make him feel “melty,” and Anna has a female voice that “we don’t really have in Country.” Blake said he based his decision on whom he felt like could “handle” the competiton better. That was Mitchell.

KNOCKOUT WINNER: Mitchell…Blake called Mitchell more valuable for the Live Playoffs because “he really knows how to work the crowd.”

Jennifer said they’re both contemporary artists and she wants to see their strengths.
Noah chose “Hold Back the River”. Noah said the song represents him as an artist. Kelly noted that Noah has an older “lived-in” voice and his rehearsal brought her to tears. Jeremiah said Pop music shows-off his voice. He chose “Sorry” by Justin Bieber. Jennifer said for an 18-year-old, Jeremiah is “sexy.”

After their Knockout Battle, Miley chose Noah because he reiminds her of Elvis. Adam said the moments they are given that transcend and turn into something special. He called Noah a “super star” and unlike anything they’ve ever seen on “The Voice”. Blake said he felt very proud and very stupid for letting Noah go in the Battles.
Jennifer told Jeremiah that it’s tricky to pick a Justin Bieber song because he needed to stand-out on his own. She told Noah he is “beyond his years.”

KNOCKOUT WINNER: Noah. Jennifer said Jeremiah has great presence. But, Noah is a true star and she couldn’t let that go.

Blake put them together because they’re big soulful singers he said. Kathrina picked “Girl on Fire” by Alicia Keys because she said it’s her story. She didn’t have anything in the Philippines and her family moved to the U.S. for her. Blake stole Kathrina. Kelly advised her to not sing it just like Alicia Keys. Kiesha chose “I Hope You Dance” because the song is a perfect combination of what she felt when she heard Whitney Houston and how she inteprets Country. She said it’s a perfect combo of Country and Soul music.

Keisha audibly blew the coaches away as they were cheering throughout her performance. Jennifer said she was in control every step of the way especially when she danced. Kathrina was on fire. Miley said it was the perfect song to represent Kathrina and she put the heat into the fire. Adam said Kathrina is “scrappy” and the perfect choice. Keisha is refreshing. Coach Blake said with Kathrina, he had a lot to learn with her and called her an incredible talent. Keisha is “a thoughtful performer and every lyric meant something to her. They both blew the roof off the place. Blake called them both “ridiculous.”

A Team Adam Knockout that wasn’t aired in it’s entirity was DYLAN GERARD vs JON MERO. Jon sang “Sunshine” and won the Knockout. 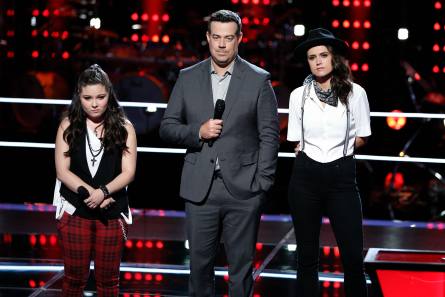 Miley said she paired them because they both hold the Rock space. Miley wants to make sure that she has one of everything on her team. “Americana and folk” is what Whitney said her style is. Moriah chose to sing “Behind These Hazel Eyes” by Kelly Clarkson. Moriah said to sing Kelly’s song in front of her was so intimidating. Kelly said Moriah is guarded. But once she “opens up, she’s going to be a force.” Kelly revealed that when she wrote that song, there was a big betrayal.

Whitney chose “Calling All Angels” song because it’s telling herself that there is hope. Whitney said she found music again. Miley stole Whitney from Adam. Kelly thinks Whitney is the girl that can sing any genre and it’s something that Moriah should look out for. 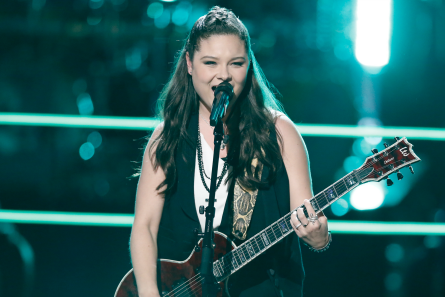 After their performance, Adam said Whitney had clarity and range to her voce. He told Moriah, that the Kelly Clarkson song is not an easy thing, and that Kelly even has trouble with the song. He called them both “unbeliveable”. The clarity of Whitney’s voice is shocking. Moriah went for bigger and higher stuff. She also called her performance “fierce”, then voted for her. Jennifer said she wouldn’t even want to be up there with Moriah because her voice is so strong. Coach Miley said she didn’t know what to do. Moriah – it’s her presence, voice and attitude. She added that Moriah has the perfect voice to represent rock. Whitney was so strong, and it was a tough choice for Miley.

KNOCKOUT WINNER: Moriah… Miley said Moriah doesn’t know how talented she is and has a good chance of winning this season.

Adam sang “Smoke on Water” because “it’s deep rock-and-roll” he said. Adam advised Adam to perform without that guitar so he can move around and kick ass. Emily said she realized she needs to “dig deeper” after watching Adam’s rehearsal. Emily chose “Glitter in the Air” song by Pink because it’s poetic and is representative of life. Adam called Emily vs. Adam his toughest decision. 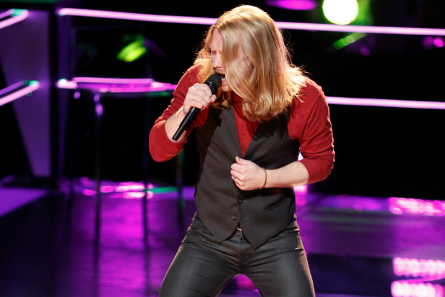 Blake called them two of the best on Team Adam. Emily gave an incredible performance. He was impressed. Jennifer called Adam “a force” and didn’t recognize that last note which “was hot for a dude.. or any person”. She chose Adam. Miley said she felt more nerves from Adam. For Emily, she sang incredibly, Miley said, and both big performances that would go well in the Lives. Coach Adam said Adam embodied the spirit of Rock-n-Roll. Emily is a star, but needs to get more of herself out there. He said she needs some of Adam’s mojo.

KNOCKOUT WINNER: Emily. Emily was shocked to be the winner. Adam said Emily was a show-stopper.
STEAL – Miley stole Adam Pearce! Miley said she’s excited to get him where he belongs – “a bigger stage and fire!” 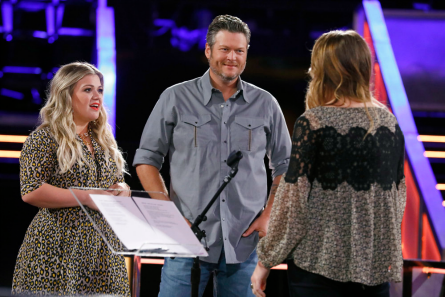 Chris Weaver sang “I Put a Spell On You”. Katrina chose to sing “Zombie” song.
Jennifer called Katrina’s voice “infectious”. Miley called them two big voices. Katrina was originally on Team Miley. Miley told her she’s proud of her, and thought Chis sang a great song for his voice. Adam said he could tell that Katrina was trying not to “erupt”. He said Chris is a laser beam and Katrina is a flame thrower. Chris had more control. Blake said Katrina had so much that wanted to erupt out of her. He said every time Chris is on stage he’s going to cause something like shoes being thrown. Coach Jennifer said she loved what Katrina gave her. She said what Chris did with his voice “they call that a frieght train,” and said they both gave her so much life. 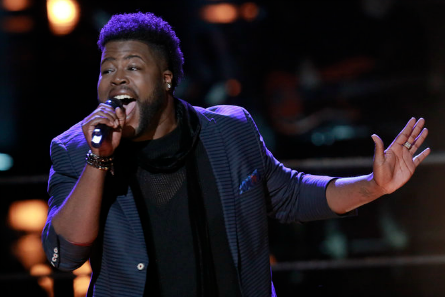 KNOCKOUT WINNER: Chris. Jennifer said she chose Chris because “the way he can draw you into a song and make you believe it, it can’t be missed.”

Megan chose “Smoke Break” song by Carrie Underwood. Blake stole Megan in the Battle Round and said he’s so happy that he did. Red picked “Outskirts of Heaven” song because it fits him perfectly. Kelly called Red a “man’s man” and she has friends that would listen to his records. Blake said Red’s voice is a throwback to the 80’s and the 90’s. Blake said of his artists that whomever steps into the part of the song they are singing is who’s going to win the Knockout Round.

Miley called Red “so natural” as if he just came off a big tour. She said with Megan, she was trying to belive that her life can be hard. Jennifer said Red is country and it took a minute for Megan to “get in there”. Blake said Megan must have been nervous and took a “half step back” from rehersals. He said Red represents a time in Country music from 15 years ago which is awesome. 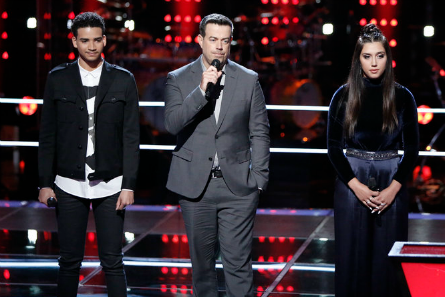 Adam said he put them against each other because they are the most “pop-worthy” voices. Anthony picked “Mercy” song by Shawn Mendes because he wants to show that there’s more to him than “falsetto”. Adam said Anthony’s tone is “amazing” and “it’s a perfect song for him.” Kelly compared Hannah’s voice to Christina Aguilera. Hannah chose “Love on the Brian” song. Blake thought she did a good job and was staying on the notes. He thought Anthony was nervous and “the lower stuff” got away form him . Jennifer told Anthony that she agreed with Blake. But, thought it was because he was passionate. Miley said she felt that what’s important for Hannah is letting people know who she is. She felt like Anthony didn’t know what to do with himself on stage.

Coach Adam said Anthony has something going on that’s not fully cooked yet, and “still in the oven”. The passion that Anthony has, Hannah pours it into being the best that she can be.

KNOCKOUT WINNER: Anthony. Adam chose Anthony because he’s a rough, raw uncut diamond and wants to see what’s underneath.
STEAL: Jennifer stole Hannah. Jennifer said Hannah has a story to tell and there’s beauty in that. She wants to help pull that out of Hannah.