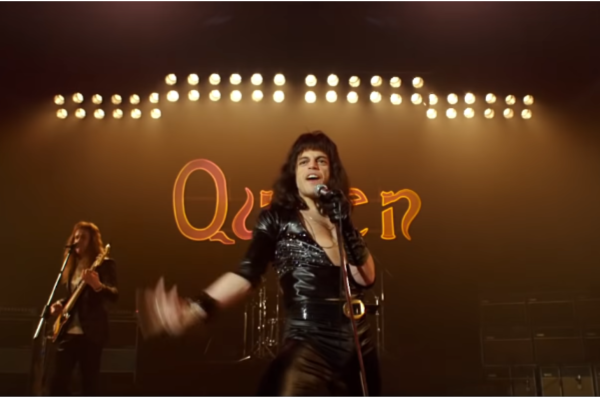 WARNING: “Bohemian Rhapsody” movie may cause sudden outbursts of singing-along and foot tapping. “Queen” songs will be stuck in your head for any given amount of time, possibly days following.

Before watching this film, ask yourself – do you like “Queen”? If the answer is “yes,” you’re good to go. If not, prepare to be emersed with an anthology of “Queen” music intertwined with a well-written story about a musician longing to find love. 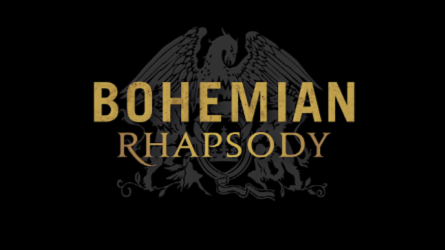 A time is revisited from a long, long while ago. It was a time when concert goers harmonized with bands using cigarette lighters and not cell phones. A time when Michael Jackson was climbing the charts, when records were played on turntables, and bands came-up with their own acoustic sounds the good-old natural way. And a time when Bob Geldof rallied together the world’s leading artists to save Africa from poverty with a little thing called “Live Aid.”

20th Century Fox’s “Bohemian Rhapsody”, directed by Bryan Singer, takes place in 1970 London where a young Farrokh Bulsara, who would soon by known to the world as Freddie Mercury was discovering who he was as an artist. This is his story. The story of the making of “Freddie Mercury.” The opening scene is a flash foward as it tells it all as Mercury walks down a long hallway adorned in a robe stepping past his many cats as they eat from their dishes. Exit into a transition of Mercury entering a vast stage surrounded by millions of fans as one of many of Queen’s hits plays in the background…”find me somebody to love.”

That lyric, “somebody to love” is the core of ‘Rhapsody’s showing the story of Mercury’s anguish throughout his career. The film focuses on the inevitable fate of a larger-than-life vocalist and mega star’s loneliness, and constant beating-off of vultures’ who are out to get whatever they can out of him for their own benefit. Ultimately, it’s Mercury’s quest to find true love is the center of this story. It’s a love story and rock story all wrapped into one. Mercury’s love to perform, which ironically directly limits his abiity to find personal love and fulfillment even after meeting his soul-mate, Mary Austin (perfectly portrayed by Lucy Boynton) who is a constant in Freddie’s life throughout the ups and downs.

Fans will get to see what went into the making of some of their favorite popular “Queen” hits. But, more importantly, possibly Queen’s most well-known song and title of the movie “Boheminan Raphsody.” Movie goers will see the humorous making-of story of what went into creating that six-minute masterpiece and their record label’s reaction. By-the-way, Mike Meyer’s comes through with a stellar disguised cameo as record producer Ray Foster.

The film also showed how “Queen” (once called “Smile”) was the first band to involve audience participation which the band expanded upon with songs like “We Will Rock You” and “We are the Champions.” These songs were specifically created for just that – for fans to be involved with their songs. “Queen” loved their fans and their fans showed it back.

The film finishes with a scene in 1985 at the famous Live Aid concert. Just before the concert Mercury tells his band that he “has ‘it’.” At that time, most people knew what “it” meant. It meant that one has the irriversible virus called “aids.” A cry fest, was not in Mercury. He stated that he wanted to keep performing all his remaining last days. The end credits finished simply with the dates of his birth and death 1948 -1991 along with stills of the real Freddie Mercury during his concert days.

Hollywood Junket caught an early full two-and-a-half hour screening (the film’s current length is 2 hr 14 min) that treated “Queen” fans to a full set in the last scene which started with the song “Bohemian Rhapsody”, then “We are the Champions”, followed by “Radio Gaga.” Yes, that’s the “Radio Gaga” that living icon Lady Gaga coined her name from.

The film celebrates Mercury’s flamboyant persona and fashion. The film shows a Mercury that was always unapologetically Freddie Mercury. “Bohemian Rhapsody” tastefully depicts his sexuality and sexual encounters. Most importantly, it embraces Mercury as an artist and as a person. Also, wonderfully played band members were: Gwilym Lee as Brian May, Ben Hardy as Roger Taylor, Joseph Mazzello as John Deacon.

American actor Rami Malek, who is best known from “Mr. Robot”, does a beautiful job at becoming Freddie Mercury. Post production would have helped in the way of giving us those brooding dark Freddie Mercury eyes and an older, aged Mercury in the film’s final scene. Other than that, this is a stand-out piece that “Queen” fans should be thrilled with. 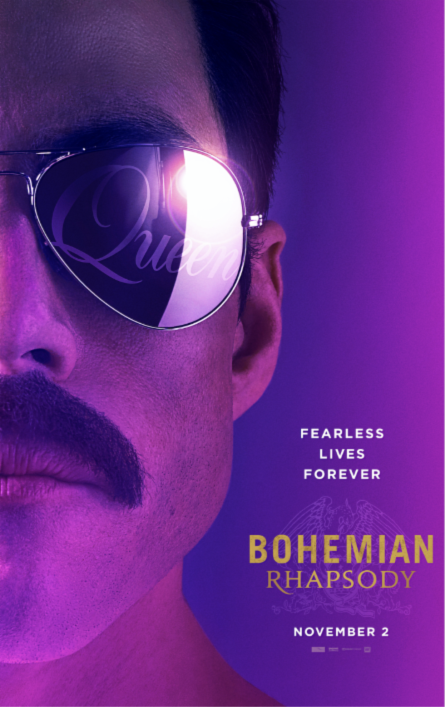