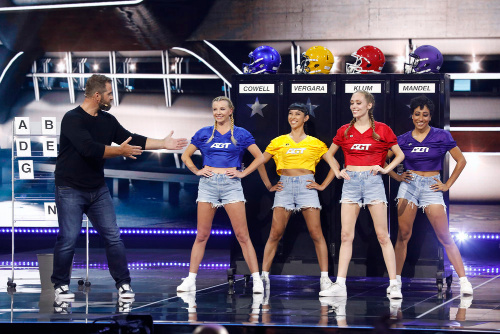 “They want to come on stage with their best performance…everybody benefits.” – Simon Cowell on new Live Show format.

At the top of “America’s Got Talent” second results show of season 17, host Terry Crews reminded viewers of the new Live Show format.  Only two acts out of eleven would go through to the Finals.  Former AGT magician Jon Dorenbos returned to perform a magic trick.

Crews explained that even if an act gets cut, there’s still hope.  Because if the audience favorites don’t make it through, they should voice it to the judges.  In a few weeks, the judges will each pick a wild card act which they think should be in the FINALS.  The at home viewers will vote in an Instant Save vote.

Simon said they did the format change because “the Live Shows start to get boring over the years.”  Everyone should bring their A- Game to the Finals.  Simon added that the downside is nine people go home  The upside is everyone has to bring their A-Game.  “To me, that’s what a Final should be all about.”  He basically said if people don’t like it, then tough.  Simon said for the contestants, “they want to come on stage with their best performance…everybody benefits.” 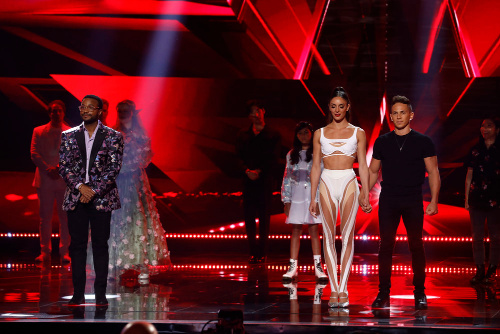 The first two acts called forward were: Wyn Starks, and Duo Rings.  The act moving on was Duo Rings.  The next two acts were Freckled Zelda and Maddie.  Before Terry Crews could read the result, the audience chanted “Maddie, Maddie, Maddie!”  The act going through was Maddie!  Howie reacted that the outcome of the votes were separated by only two percent.

Then, Chapel Hart were called along with Pack Drumline to hear their fates.  The voting went to Chapel Hart.  Simon’s reaction was “oh gosh..right at this moment, feeling very happy and feeling unhappy.” He said however,  “America votes and we have to go with that.”  He told Pack Drumline to never give up on their dream.  But, he said Chapel Hart does deserve to be there. 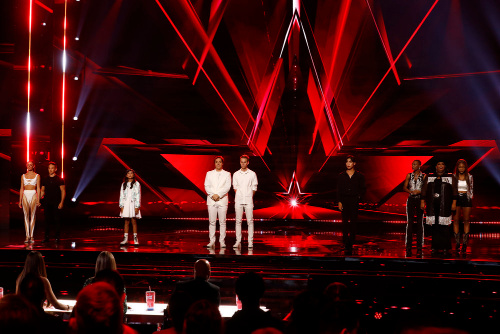 In the return of Jon Dorenbos to the AGT stage, there was a major mistake in his final reveal.  Jon, who is an ex-football player, took on a football theme with a locker room setting for his trick.  Jon had a box full of numbers printed onto papers that the judges grabbed one out of the box.  All judges except for Simon took a peek at their numbers.  Then, the judges chose individual letters from a bunch of printed letters on stage.  Jon matched those numbers up with colors and helmuts.  That revealed corresponding numbers and colors on football jerseys  All of which matched-up except for Heidi Klum’s.

Where the mistake in the trick happened was when Heidi revealed her number as “8”.  The same number as Simon’s.  Jon immediately reacted, “we’ll come back to Heidi.” Then, going back to open Heidi’s locker, Jon explained that he thought Heidi would pick number “20.”   It was supposed to have been 20, which, along with Howie’s chosen number 22, would have made up the year 2022.  Jon took the mishap in stride.  But, looked somewhat upset at the very end of his act.  The judges gave him a standing ovation.  It almost seemed like a Dustin Tavella type of move.  Which is when something seems to go wrong in his trick, it’s actually part of the trick.  Unfortunately, that wasn’t the case and it actually really was a mistake.

The first act revealed in the Top 3 was Yu Hojin.  The next act was Maddie.  Then the third spot went to Chapel Hart.  The acts leaving were Duo Rings and The Brown Brothers.  Sofia told them that the three of them deserve to be in the Finals.  She was sad to see Duo Rings go.

THE TWO FINAL ACTS:  The first act announced as going to the Finals was Chapel Hart!  Heidi said they sang their way into everyone’s heart.  Simon reacted that he was “so happy!”   Before Terry Crews announced the last act moving forward, the audience chanted Maddie’s name again!  The second act headed to the Finals was Yu Hojin!  Yu Hojin was teary-eyed and gave Maddie a big hug before she exited the stage. 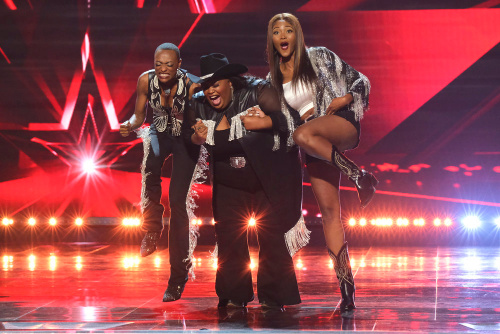