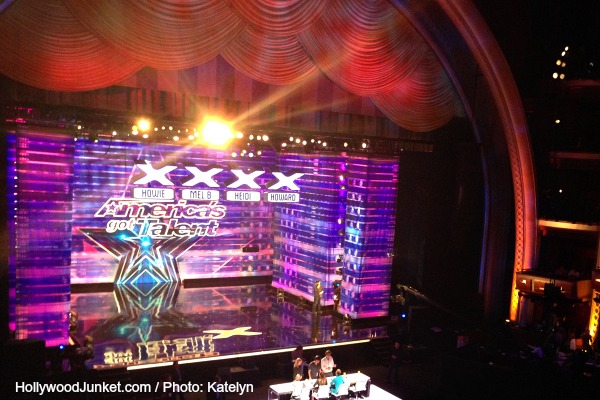 During an interview earlier this year, the judges of NBC’s reality competition talent/variety show “America’s Got Talent” talked about how going into its ninth season is attempting to revamp itself. One of the judges, Howie Mandel talked about the “gold buzzer,” which allows each judge to save an act — but only once during the season. “I was the first to use the golden buzzer. I don’t know if I squandered my opportunity,” Mandel said.

Also new this season, there will be a “boot camp,” allowing acts to perform for the first time in front of a live audience. “It makes you rise up,” he explained. “There are a couple of differences this season, and some of it is going to be a surprise. But it is going to be different.” This season, performers will be on stage at Madison Madison Square Garden and the Dolby Theater in Hollywood. The heat is up!

THE DOLBY THEATRE IN HOLLYWOOD:
Before the acts hit the stage at the Dolby Theatre, audience warm-up host Frank Nicotero (Street Smarts, Yahoo’s Prime Time in No Time) pulled an eleven-year-old girl up onto the stage to give her a rare opportunity – to perform in front of the theater-filled room a certain rap song that she had only memorized the first verse. Her name is Kiayah and her rendition of “Rappers Delight” is number four on iTunes she said. She came with her own sound track as well which she handed over to Nicotero.

As the crowd patiently awaited for the show to begin, and pre-judges intros, the first act was busy at work setting up their contraption which were two large rectangular shaped padded trampolines on each side of a large square tower. Their costumes resembled the Teenage Mutant Ninja Turtles, minus the ninja masks.

The host of “America’s Got Talent”, Nick Cannon, hit the stage in no time to announce the judges’ grand entrances. The judges entered the theater via the back doors on the main floor. Howie Mandel wore a sliver jacket, Mel B. was very sexy in a tight mini-leopard printed dress, Heidi Klum looked very chic in a crisp, vibrant blue suit, and Howard Stern, never one to impress, showed-up in his typical dark gray and black wardrobe.

WATCHING SUPER-HEROES:
Time to watch the first act of the day. After much practice bouncing up and down the large trampolines, the group of about five young twenty-something men calling themselves “Gravity Assassins” (reminiscent of “Fighting Gravity” from AGT season 5) performing their stunts which, guess what? Consisted of the young men bouncing up and down the trampolines, but in a very showmanship and stunt type of way.

The judges reacted to what they saw – Stern said it was like watching “real life super heroes” and that they were like Spider-Man. Mandel commented that he didn’t really care for the act because it was not “death-defying”, and there was no sense of danger.

The second act really gave the competition a run for their money. They call themselves “Moth Man”. They are a large group of young men and women who did some amazing choreographed wire-act stunts and dance. They received a standing-ovation from the audience and the judges. They were followed by a one-man act called “Joe The Bird Man”. Joe came out onto the stage carrying a beautiful bird on his shoulder. Joe said he currently performs in Las Vegas and if he won AGT, the prize money would go towards saving endangered bird species. He said he’s been training birds for 38 years, and has had his show for 32 years. The bird tried to join into his conversation with the judges. When time came for the bird to sing, well, she got a bit shy.

IT’S COMPLEX!
Many of the groups auditioning this season have been young in age. A dance group who describes their style as “areobalance” call themselves “Complexity”. Although very well choreographed, there were some mishaps which Heidi pointed out immediately following their performance. Overall, Heidi liked their act. Howie Mandel, on the other hand, really laid it out to them. “We value at times perfection. Each season is better than the one before,” he told them.

THIS ACT HAD HOWARD & MEL B RUNNING!
Next up was a seriously creepy act – a spider man. Arthur is an entomologist who says he spends all day dissecting insect penises. It’s still unclear whether or not he was joking. Arthur came with a cage full of venomous tarantulas. When he approached the stage with them, Stern, and Mel B. got-up and walked away. Arthur’s act consisted not of talent, but one of a record breaking attempt. He was out to be the first one to hold five live venomous tarantulas on his face. After his stunt was over, Heidi held one of his spiders in her hand.

When Mel B. came back to her seat she told Arthur, “I hate spiders. I know tonight I’m going to have nightmares about spiders and it’s all going to be your bloody fault!” Howie told him that it belongs at a zoo and it’s not an act.

The next act brought out two young pre-teen girls named Hannah and Savannah dressed in black-and-white pattern body suits while standing in front of a large box in the exact same pattern. After hiding inside of the box, their act soon revealed more young girls coming out of this grand box/prop as they put-on a well choreographed number. Howie said it was “much more than dance. It was a production.” Howard told them that there dancing “wasn’t strong.”

YEAR OF THE AGES:
Plus, Hecklers In The Audience!

“Breaking 27” is the name of another group of pre-teen kids ages ranging from twelve years-old (the lead singer) to fourteen. Their name is inspired by young rockers who all died at the age of twenty-seven: Jimi Hendrix, Kurt Cobain, Jim Morrison. They said their goal was to live past the age of twenty-seven! They performed “Kids in America” song. Unfortunately, the sound system wasn’t set-up quiet right, and it was difficult to hear the vocals. Some hecklers in the audience shouted to the judges complaints about the audio by yelling “Fire your sound guy!”, and “fix your sound mixer!” Howard said he is a “sucker for kid groups.” Howie thought it “was NOT phenomenal.” Mandel also stated that “this is the year of the ages. Some of the youngest acts and some of the oldest.”

An extreme ballroom dance group took the stage next. They said that they currently perform in Las Vegas for non-profit. They’ve been together for eight years. However, their display of talent wasn’t up to par for some of the AGT judges. One judge told them that their competition so far this season has been “phenomenal and fantastic.”

HOWARD PREEMPTED THE SHOW:
A large group (30+) young kids performed an act in which Howard was moved to use the Golden Buzzer. Only thing is, he already used it during this filming season! AGT producers rushed to the judges table to explain that the rules do not permit nor allow it. Fans will have to watch the show to see which act got Howard’s Golden Buzzer vote! Filming of the show temporarily paused in order to address the Golden Buzzer issue. Viewers will be surprised at how Howard resolved this issue! UPDATE: In original episode air-date June 22, 2014 – the group was ONE VOICE CHILDREN’S CHOIR. However, this portion of events with Howard hitting the Golden Buzzer were edited out from the final episode. The part where Howard begs Mel B to change her vote was kept in.

BEST SELFIES:
Fitness instructor, Danielle gave the judges a lesson on taking great ab selfies! Really! THAT was her act. She did this by showing off different poses one can do in order to achieve flattering ab selfies on a cell phone. One pose was called a “tea pot”. She was the receiver of the first buzzer hit of the day (NOT the Golden one!) which was hit by Howard Stern, followed by Howie Mandel. Heidi called her act “a waste of time”. Mel told her that she already “knows all those moves”. Stern said it was “getting ridiculous!”

Young, eleven-year-old classical singing prodigy Clark Rubinshtein from Newton, Massachusetts showed-off his voice in front of the judges by singing an emotional song much older than his years. Mel B. said she can certainly “appreciate how extraordinary” his voice is. Heidi said she “wasn’t really that moved” by his performance. Howard Stern called him “an amazing young man.”