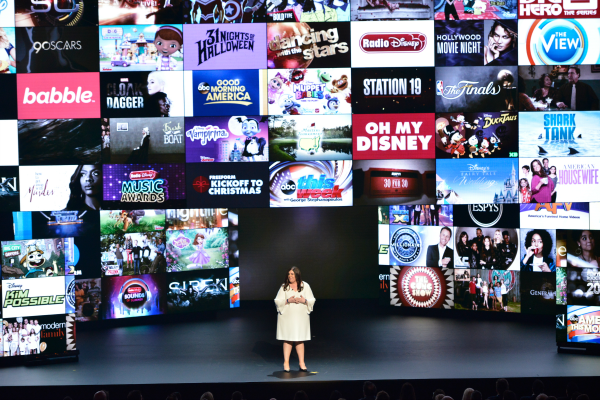 A lot of the new shows appear to have come from in-house ABC staff, whether it be from a current star of an ABC show, or a current show-runner/producer.

The opening of the ABC Upfronts presentation was done as mock “American Idol” auditions in front of judges Luke Bryan, Katy Perry, and Lionel Richie. The array of many familiar faces gave viewers a glimpse of the returning shows. The contestants consisted of cast members from Shark Tank, Good Moring America (GMA), The Goldbergs, Shadow Hunter, The Bold Type, Black’ish, The Housewife, and finally – Roseanne who sang “My Way” by Frank Sinatra and won her audition. Thus, Roseanne Barr opened this years Upfronts for ABC.

This was the first year that ABC combined the network with their millennials Freeform network in their Upfront presentation. The co-chairman, Disney Media Network President Ben Sherwood said it’s been 24 years since the network had a “top notch TV show.” Currently, they have the number one new cable comedy in “Grown’ish” (spin-off of “Black’ish”), and the number one new drama in “Siren.”

Anchors from “Good Morning America” and “ABC Nighty News” were on hand to talk about sharing stories live this past season, and to present their new campaign narrated by “Roseanne” actor John Goodman, and to tease viewers that this Fall there will be some big “wow” stories coming-up. 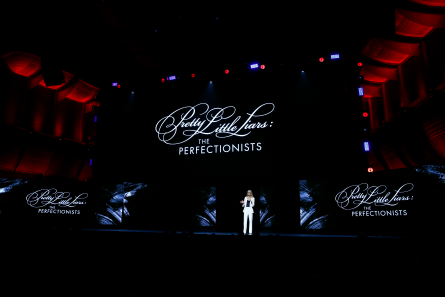 From Freeform, audiences can look forward to new shows “Pretty Little Liars the Perfectionists” which is a spin-off from “Pretty Little Liars” with characters Mona and Allison who return as college falculty members. The teaser trailer showed scenarios with a college-aged cast coping with the stresses of young adulthood, along with a murder mystery in the storyline. From Marvel is a new show called “Cloak & Dagger”. Also on the Freeform network, viewers will be treated to the biggest holiday season of programming with “31 Nights of Halloween” in October, “Kick Off to Christmas” in November, and “25 Days of Christmas” in December. Also coming back is “Life Size 2” with Tyra Banks.

From ABC, new shows that were introduced at the Upfront last year – “The Good Doctor” and “Roseanne” are returning for seasons 2, along with “American Idol.” More shows coming back are “Dancing with the Stars,” “The Bachelor”, “Grey’s Anatomy,” “Station 19,” “How to Get Away with Murder,” “For the People,” “America’s Funniest Home Videos” (season 29). Introducing a new spin-off show is “Dancing with the Stars Juniors” which will feature celebrity kids competiting with some of the best child dancers. Lindsay Arnold’s (from DWTS) sister will be competing on this show.

“Shark Tank” (season 10) will remain in it’s Sunday time slot, and new “The Alec Baldwin Show” will be introduced on Sundays. The show was inspired by Baldwin’s successful podcast.

“Fresh off the Boat” returns for a fifth season, “Speechless” and “Child Support” are also both back. Then, in January “20/20” news magazine show expands to two hours. 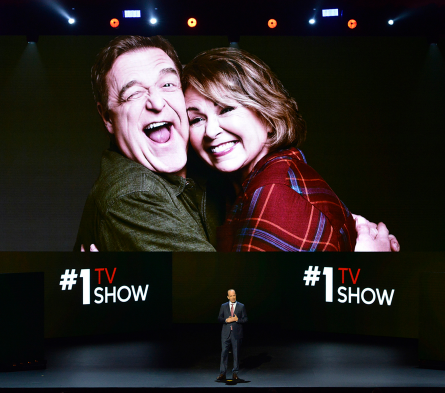 Tuesday’s schedule includes a line-up of “Roseanne”, “Black’ish”, “Splitting Up Together,” and new show “Rookie.” The Los Angeles Police Department is one of few that accepts rookies over 40 years of age. This fact inspired show-runner to create new ABC drama “Rookie” starring Nathan Fillion from “Castle.” After a life-changing moment, Fillion’s character in “Rookie” decides that he wants to do something that matters which is why he joins the Police Department. 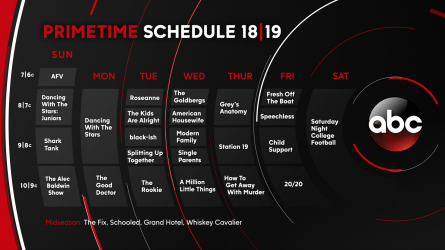 Another new Tuesday show is “The Kids Are Alright” which is by Tim Boyle who is the show’s creator, show-runner and the voice of Timmy character. The 1970’s era show is based on Boyle’s family.

Wednesday nights include: “The Goldbergs”, “American Housewife”, “Modern Family”, and new show “Single Parents.” ABC will also introduce a “dramadey” which appears to have a “Big Chill” movie vibe called “A Million Little Things” airing in the 10 pm slot. The show is about a group of friends who are stuck in their lives. When one of them commits suicide, it inspires them to start living. The show was presented as “a true celebration of friendship.” 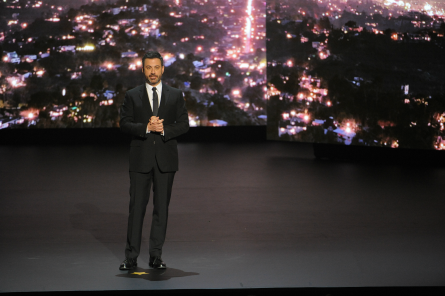 A presentation within this Upfront presentation was done by comedian Jimmy Kimmel, who the network quickly reminded everyone, has hosted the Oscars for the last two years. Kimmel commented on a slogan that flashed on the screen behind him which read
“Forward Together.” He stated Hilary Clinton let them have that at a yard sell. Kimmel threw many playful (yet seemingly harsh jabs at times) at other networks, along with ABC. He bragged that ABC isn’t in last place, “that honor belongs to FOX, or ‘New FOX'”.

Kimmel said Disney is in the midst of trying to buy FOX. However, then Comcast, showed-up and wealseled their way in tho their business. (like an ex on ‘The Bachelor’). Kimmel quipped, “we can’t lose FOX and Shonda Rhimes all in the same year.” Being that Rhimes changd the face of ABC “and we hope she rots in hell. They say, when one door closes, we’re fucked!” Kimmel reassured with “we’re going into
Roseannaland!”

Speaking-of, Kimmel stated that no one at ABC expected “Roseanne” to be a big hit. “We don’t expect any of our shows to be hits.” Kimmel threw a punch at CBS in saying “‘Murphy Brown’ is back on CBS. It’s good to see anything brown on CBS.”

Kimmel did something that networks rarely do, pointing-out their failures. He touched upon some of ABC’s cancelled shows – Quantico, Deception, Marvel’s Inhumans. Kimmel scorned, “somehow we managed to have the only unsuccessful project with Marvel in the title. Kimmel revealed ABC’s new reality dating show called “The Proposal” and compared it to the likes of sex trafficking, along with “Whiskey Cavalier.”

Mid-season shows that will be airing include a Marcia Clark executive produced court drama called “The Fix” based on the O.J. Simpson trial. It’s about a movie star found not-guilty, only to be brought back into scrutiny when his wife is killed eight years later. This show has a “How to Get Away with Murder” feel to it with similar titles as well.

Next, is “The Goldbergs” spin-off show called “Schooled” from Adam Goldberg. It’s a tribute to the passionate teachers who inspired him growing-up. This show, which is set in the 1990s fast-fowards on certain characters from “The Goldbergs” and finds them at the same high school. Those characters are – Wescott who is now the head of the school, coach Miller who is still a coach, Laney who is now a music teacher.

New drama from executive producer Eva Longoria is “Grand Hotel.” A show set in Miami Beach is about the “downstairs and upstairs” of a hotel where the upstairs are the Latino characters.

New show “Whiskey Cavalier” was described in the Upfront as “explosive, funny and romantic.” Executive Producer Bill Lawrence combined cinematic action with bantor. Scott Foley (“Scandal”) stars as FBI Agent Wilson. Foley, with his co-star (from “The Walking Dead”) came onto the stage to introduce the show. It’s about a CIA super-spy that saves the world who sometimes lets her FBI little buddy (Foley character) tag along. “Whiskey Cavalier” is his code name. 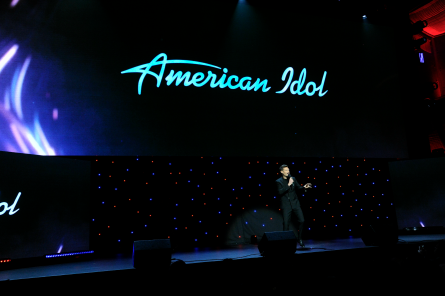 Ryan Seacrest was up next to hype “American Idol” and he closed the presentation. He stated that “American Idol” judges Katy, Lionel, and Luke were all in Los Angeles getting ready for the show’s finale episode. Seacrest told everyone that he’s thrilled to be hosting a second season of A.I. He reminded them that the “American Idol” two-night finale is Sunday, May 20th, and Monday, May 21st. 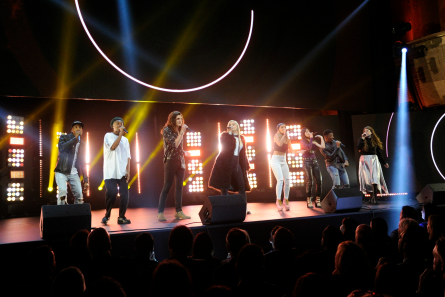 The Top 3 contestants from “American Idol” Caleb, Gaby, and Maddie were there to sing a close-out song to wrap-up the presentation. They were later joined by the rest of the Top 8. 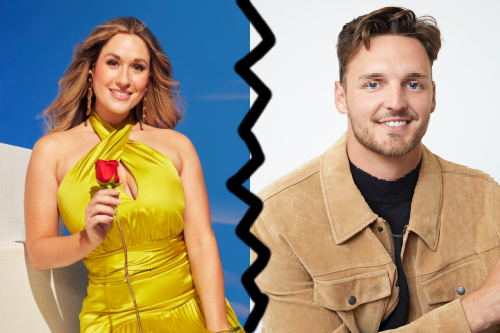 Rachel Pushed Over the Edge on THE BACHELORETTE Season 19 Week 5 Preview!