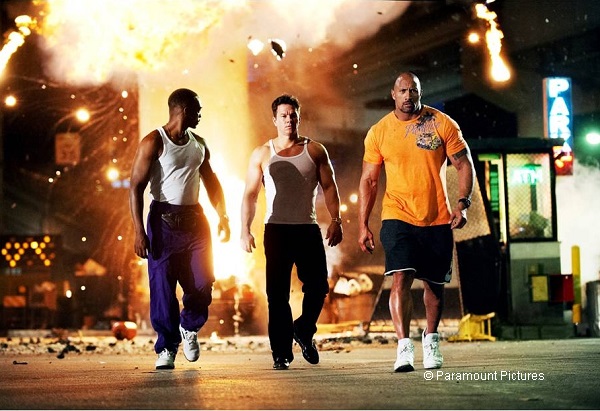 “I believe in fitness” are the words muscle head Daniel Lugo (Mark Wahlberg) says in the opening scene of “Pain and Gain” that shows his back story of how one day he decided to make his life better. “Pain and Gain” is based on the true story of Lugo and his pals – a steroid using gym goer, and a pumped-up convict, who commit extortion and murder in their efforts to pursue the American dream.

The incidents happen in Miami, Florida. A place Lugo describes as “God’s waiting room” due to the vast amounts of Senior Citizen residents. Life, liberty, and the pursuit of happiness are all rights that the crew of Lugo, Paul Doyle (Dwayne Johnson), Adrian Doorbal (Anthony Mackie) attempt to take away from their tagged victim, millionaire Victor Kershaw (Tony Shalhoub) after Lugo is inspired by motivational speaker Johnny Wu (Ken Jeong). “Don’t be a don’ter! Do be a doer!” Johnny Wu exclaimed. Lugo responds “I’m a doer! I’m a doer! I’m a doer!” Thus, goes on to kidnap Victor to have him sign away all of his assets and money to him. An effort which takes an agonizing (but comical) thirty days.

Taking place from October 1994 to June 1995, “Pain and Gain” depicts each of the characters who become involved in the kidnapping of Victor back stories as told by themselves in narration. Lugo recites in his own telling of the story with narration throughout the film in sort of a “Goodfellas” type of way – bouncing from different times in the past, he introduces the re-telling of it with “unfortunately, this is a true story.” Lugo explains how he left the gym where he was a personal trainer at, and went to a barely functioning one called “Sun Gym” which catered to senior citizens. His promises to gym owner John Merse (Rob Corddry) to triple the gym’s memberships in three months is enough for Merse to overlook his criminal past and hire him on the spot. Lugo truly believes in his own philosophy that ultimately gets him into trouble – “If you’re willing to do the work, you can have anything.”

Paul Doyle comes onto the scene as a recently released prisoner from Attica Correctional Facility, who is a born again Christian, trying to live the clean life. He decides to go to Florida because, he says, “I have no records in Florida.” His new squeaky-clean choir-boy identity doesn’t last very long when the temptations of Lugo’s plans hit his ears and thoughts of money and drugs become too strong for him to resist. 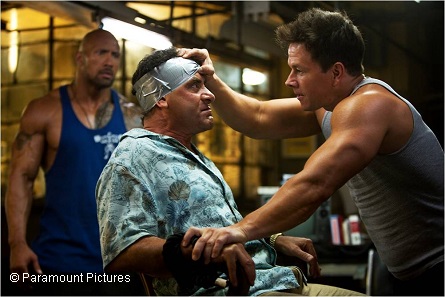 Soon after their first kidnapping is somewhat successful, Lugo’s muscle head crew get an appetite for more. In their second attempt at stealing the next rich guy’s money, it sends them down an unavoidable path ending for the worse.

“Pain and Gain” is a visually appealing movie loaded with beautiful men and women with the rich, vibrant colors of the backdrop of Miami, and loads of testosterone action. Some vulgar, some graphic. And, yes, there are explosions! Religious do-gooder, turned cocaine addict Paul Doyle is best played by Dwayne Johnson. The quintessential rich ass-hole Victor is so point-on, It was easy to forget it was actor Tony Shalhoub from the television series “Monked”. Mark Wahlberg who plays ring leader Lugo is long separated from his “Boogie Nights” days past as porn actor Dirk Diggler. Rebel Wilson owns her authentic Australian accent in this one and is the other half to Anthony Mackie as a believable couple.

Film legend Ed Harris is also thrown into the mix as retired detective Ed DuBois whose smarts and open-mindedness sets him onto the right path to Lugo and his boys. Ken Jeong as the motivational speaker Johnny Wu is always a joy to watch as any character he plays and my biggest complaint about this movie is that there were not more scenes with him in them. But, the physical beauty of all of the in-shape bodies make up for it. 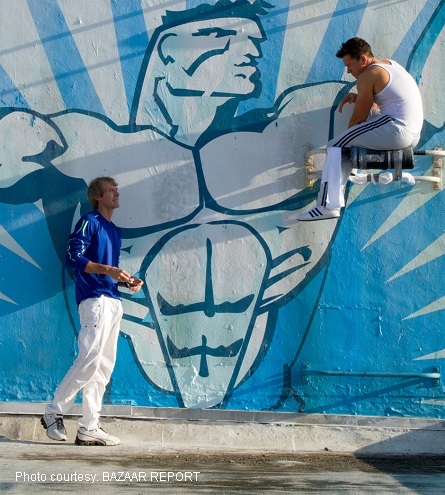 “Pain and Gain” fully tells the stories in good time (2 hours, 10 minutes) of what seems to be a story of absurdness and chaos that seems too unreal to be true. Which is perfect when Paul Doyle is doing his best to erase a spoiler to a crime they committed in a very unconventional way, a pop-up reminds the audience “This is still a true story.” Loose story-lines are wrapped-up at the end with courtesy notes of where these real people are now along with their photos.

“Pain and Gain” is an enjoyable film with a dark-comedy twist that Michael Bay delivers as always with perfectly timed action. “Pain and Gain” opens in theaters Friday, April 26, 2013. MORE PAIN AND GAIN here! 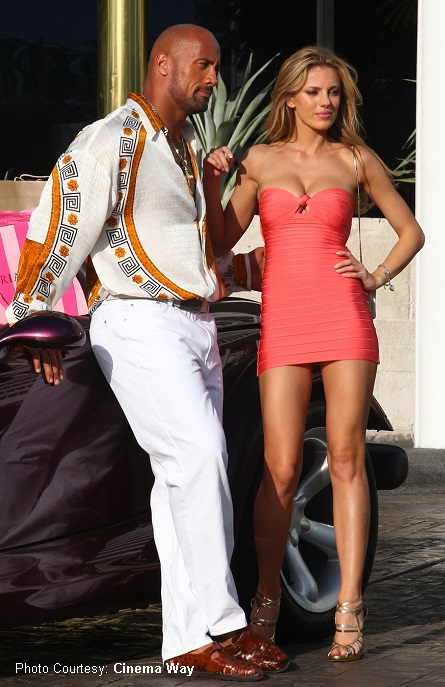