Showstopper! SO YOU THINK YOU CAN DANCE Top 18 Live Shows Week 3 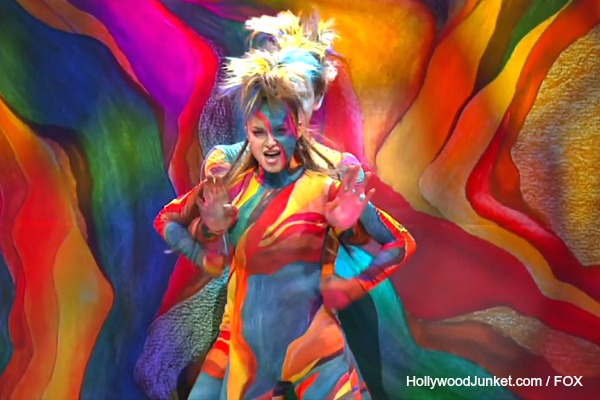 The “So You Think You Can Dance” (SYTYCD) live show week two kicked it off with an opening number by the Top 20 from Broadway musical On the Town. A play in which the winner of SYTYCD this season will win a starring role in. They had the honor of being choreographed by Emmy winning choreographer Josh Bergasse whose work includes “On the Town” and past NBC musical drama show “Smash”.

The SYTYCD judges Nigel Lythgoe, Mary Murphy, and guest judge Misty Copeland showed their support of their favorite baseball teams and honoring the official opening of baseball season and the All Star Game that occurs on July 15, by wearing their teams’ jerseys. They then showed a highlight video host Cat Deeley throwing out the first pitch of the season at Dodgers Stadium. She said she figured that she couldn’t do any worse than 50 Cent or Carly Rae Jaspen.

Nigel reminded everyone that this season there will be only one winner. Before they announced the dancers who pulled-in the fewest votes, placing them in the bottom six, Nigel gave some words of inspiration by quoting Winston Churchill – “Success is not final. Failure is not fatal. It’s the courage to pick yourself up.”

The partners who’ve been paired starting this episode will remain partners until the Top 10. Nigel informed us that when they reach the Top 14, there will be four dancers eliminated to get them to the Top 10. 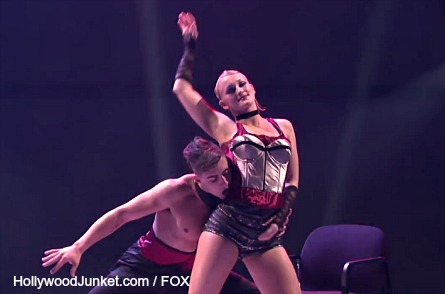 After their performance, Mary said “wow, that was a strong performance. Tanisha, holy smokes! You went for it.” She said Rudy was a strong partner. Misty Copeland told Tanisha “sexy has many faces. You gave me all of those faces.” Her advice to Rudy was to think of himself as a tree trunk. Nigel commented on Tanisha, “I think there is a lot more to you than being a ballroom dancer.” He told Rudy that he’s stronger than he thought. 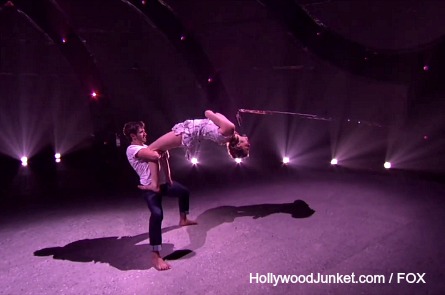 Their number was choreographed by Travis Wall. Misty said, “you guys are wonderful together,” and that Valerie (a tap dancer) an learn by watching Ricky. Nigel said, “Your chemistry is going to be wonderful. I wanted to see more emotion (from Valerie). Today, Ricky has given everything he can.” Mary said it was magnificent. 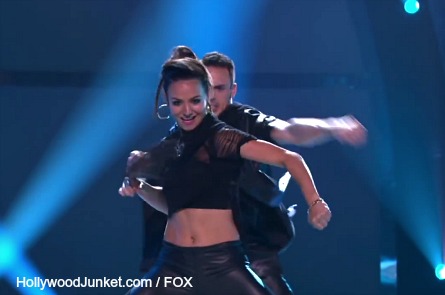 Their dance was choreographed by Luther Brown. Nigel said “great chemistry.” Nigel gave Emilio a hard time about his outfit by saying, “I’m not sure what you’re wearing but it looks like Kate Spades’ mini skirt,” and that it makes him look like a hobbit. He told Bridget that he thought that she’d be terrible at the hip-hop routine, but she wasn’t. Mary told Bridget, “You ate the whole thing for dinner, you spit it out! Fabulousness!” Misty gave Bridget advice, “you can still be feminine and get down. Own it…be fierce, strong, sexy woman.” 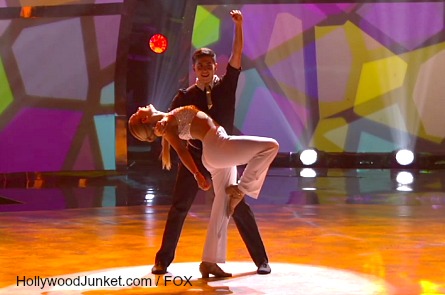 They were choreographed by SYTYCD season two winner Benji Schwimmer on a West Coast swing number. Mary told them, “I’m exhausted sitting here. What a great routine. Misty thought it was entertaining and advised them to watch their feet. Nigel gave it to them straight by telling them he thought Benji could have done the routine very well, but it was asking a lot of both of them. They were out of their comfort zones. He pointed-out that Nick looked uncomfortable and Jessica was too over-exaggerated. He said they could have done a lot better than that. 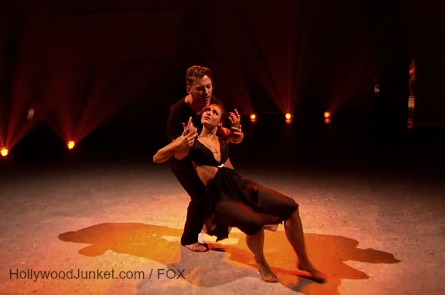 They were choreographed by Sonya Tayeh. Misty was pleased with their number and praised Serge, “that’s dancing. It’s not about whether you take a million ballet classes. I could see it.” Nigel said, “It’s amazing how you can touch someone with a dance routine.” He told Serge that it was the best he’s seen him do outside of his style. He told Carly that her emotion was real. Mary was emotional over Serge because he worked so hard to be there. 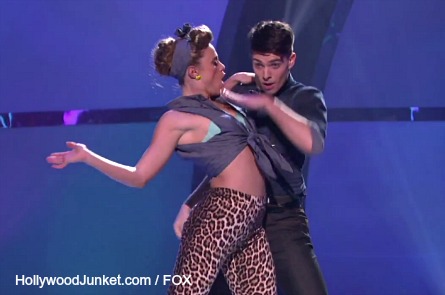 They dance a number choreographed by Dave Scott who told them during their rehearsal not to be so timid and “they need to make out!” Nigel told Emily to perform for her partner before she performs for the audience. Mary said it was “really cute” and that she didn’t get the leopard print memo. Kat and Emily were both wearing leopard print. Misty said she needed to see more of a connection throughout the routine. 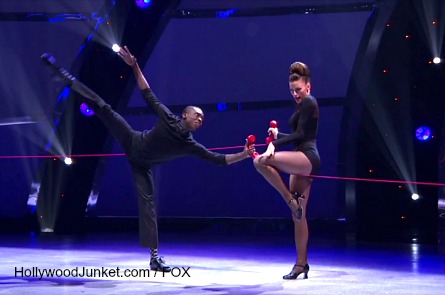 They were given an old-style 50s themed routine choreographed by Spencer Liff. After their number, all of the judges gave them negative feedback having to do mostly with the choreography. They were made to dance with corded phone props which the judges thought was too limiting for them. Mary said she loved the concept. But wanted to see them lose the phones after the first 20 seconds. Misty said Malene is sexy, but thought that there was no connection between her and Stanley. Nigel used the pun “wrong number” to describe their dance. He said Spencer should have given them something different, and he was disappointed. 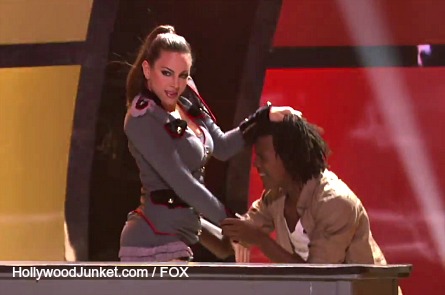 Jourdan played interrogator to Marcquet’s criminal. Nigel said he enjoyed Jourdan dancing that better than he did of her doing ballet last week. He advised her not to break character like she did when she smiled during the routine. He told Marcquet that he was “tremendous”. Mary noted that it was nice to see Jourdan out of her comfort zone and liked that their choreographer Sean used her legs. 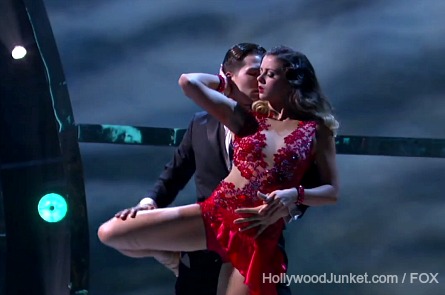 They danced the tango choreographed by Miriam and Leonardo. Mary told Brooklyn that tonight with this dance, she was “this woman out there,” and not young and cutesy. Mary told Casey that she was proud of him and was amazed – “who are you right now?” She complimented them “the Argentine Tango is difficult, you nailed it!” Misty said to Casey, “You were fabulous and you committed.” She told Brooklyn “the sexiness was there. I’d like to see more assertiveness.” 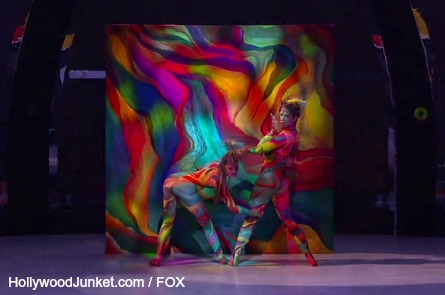 They were the last performance of the night. They had to dance an African number that required them to camouflage themselves against a vibrant painting in which they were also painted as. Misty told them that they were “on fire.” The judges loved it and were sure that they will be back next week.

The Bottom 3 Women – Malene, Brooklyn, Jourdan
Nigel said the judges looked at everything from since the time that they’ve been with them. He’s proud of Brooklyn’s maturity, and last week they over-looked a lot of mistakes made by Jourdan, but this week she showed them that she’s more than just a ballerina. Nigel told Malene that although she is one of the most stunning Latin dancers that they’ve had on the show, but she would not be moving on.
Malene was eliminated.

The Bottom 3 Men – Serge, Casey, Nick
Nigel told them it was tough to make this decision. “America put you in the bottom three. Until the Top 10, judges make the decisions of eliminations.” He told Casey he thought was tremendous and strong . He said Nick had a lot of foot work last week. “Tonight you looked uncomfortable. You need to up your game.” Nigel told Serge that he dances from the heart.  The one male dancer that they sent home was Nick.
Nick was eliminated. 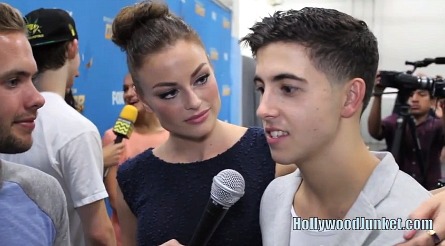