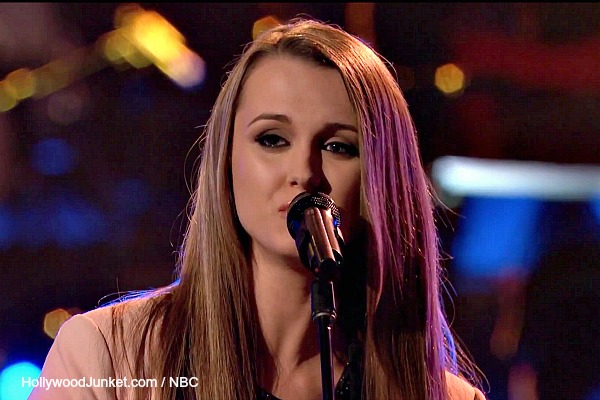 It’s the last night for the few remaining artists on “The Voice” to show-off their talent and stake a claim in the live shows. There are only three spots left and coach Usher has the difficult task in selecting three of his five artists to remain in the competition. After tonight, the remaining talent will make up the Top 12 where all the teams will compete against each other to be “The Voice” winner. Team Shakira – Tess Boyer, Kristen Merlin, Dani Moz; Team Adam – Kat Perkins, Delvin Choice, Christina Grimmie; Team Blake – Sisaundra Lewis, Jake Worthington, Audra McLaughlin. T.J. Wilkins is in the competition not only for a music career, but also to get his family out of South Central, Los Angeles. T.J. decided to sing “Tell Me Something Good” by Rufus and Chaka Khan.

Shakira reacted to his performance with, “The audience loved you! I did too. You’re so soulful, so committed. the high notes was The ace under your sleeve.” Adam laughed at Shakira’s ‘ace under your sleeve’ remark, (the correct saying is ‘the ace up your sleeve’) and said to T.J., “You are a breath of fresh air because you really want to entertain people.” Adam told him to keep that as his target and he will do very well in his singing career.

Blake remembered Biff – “When Usher chose you over Biff, that was a tough one. But I’m on board now one hundred percent. That was just so good.” Blake then asked Usher, “What type of horn did you hear him being?” Usher said “a tenor sax”. Blake said, “what’s a tenor sax?”

Usher said, “It’s always great to see a very proud representation of a genre of music that I respect and love. You reminded us of a careless nature of music. You completely killed it. If this is the beginning of the choices I have to make, it’s going to be hard.” Blake agreed that T.J. set the bar high.

Some Good And Some Bad Moments:
Melissa Jimenez

Melissa told Usher that he pulled her up on stage during a concert. She chose the song “Halo”by Beyonce to perform. Melissa was really courageous to make it all about her voice. Usher advised her to “go out there and kill it.”

Shakira admired her for trying, “It was a very brave move to strip the song down. You took a different approach. Very courageous.”

Usher re-enforced, “you understood that this is a live or die moment. You’re recognizing things that work for you or against you. I hope you are ready to be committed to your music every time that you step onto the stage.

His parents were both in heavy metal bands, so he said it’s in his blood. But, Stevie Jo wants to be an R&B artist. Singing “The Thrill Is Gone” by B.B. King. He said the song expresses the kind of artist that he wants to be.

Blake thought Stevie Jo was rabbit hunting, “I love watching Stevie Jo perform, it’s like he’s sneaking-up on a rabbit. You really nailed the singing part. If there’s any artist you’re going to get nick-picked about by Adam and Usher, it’s B.B. King. I know you’re the real deal and I’m a fan.” Adam promised not to nick-pick and instead, praised Stevie Jo, “Picking your own songs at this point shows us not only what your taste is but how ambitious you are.” He also said that all of the technical stuff goes out the window

Shakira said, “You grabbed me from the fist 20 seconds. I enjoyed your falsettos and your voice got raspy at the end.”

Usher was pleased, “I’m a fan of your growth. This is a song about heart and pain. You did a great job of connecting it with you. You have to fill the energy of the room. You believed it. And like I said, if you don’t believe it, no one else will.” Stevie Jo said he hopes this risk will pay off for him in going on to the live shows of the competition.

Putting Shine On It:
Bria Kelly

Bria is 18 years old. She was a student in high school and playing gigs with the help of her father before going onto “The Voice”. Four coaches turned their chairs for her during her blind audition. She said she chose Usher because he pointed-out the flaws in her voice.

“Bria Kelly is the reason why Team Usher is a threat,” said Blake. Bria is singing “Wild Horses” by The Rolling Stones.

Adam reminded Bria and everyone else of when Usher won her over by showing her his Grammy and gold colored shoes during her blind audition. “I didn’t have the golden Grammy, fancy-pants shoes to lure you in,” said Adam, then yelled “Stop looking at the shoes! I was worried about you last time, because you weren’t you. I’m really pleased to say you’re back. Bravo, you did a really great job.”

Stop Looking At The Shoes!

Shakira said, “I’m a huge fan of Bria’s too. You have a beautiful voice. How do you do what you do? High notes, raspy voice. That sound is so unique.”

Blake complimented Bria, “You make people step-up. I saw things in Madilyn and Tess that I didn’t see before until they sang against you. You’re softer side is as golden as your (to Usher) shoes.”

Usher said, “everybody watching at home understands that this is trial and error. Who you are and who you want to be. The fist time that I heard the record and and everyone, it meant something very specific to them and you were able to bring us back to that place and put shine on it and make it your own.”

Usher stole Josh Kaufman from Adam during the second Battle Rounds. Josh said his life was “giging and tutoring” to support his family. He said he was relieved when Usher stole him. Josh chose to sing “It Will Rain” by Bruno Mars. He said he grew-up in church and that’s where his soul sound started. Usher said “this is a make or break for Josh because he was let go once. This is his last stop.”

Adam was pained to see how well Josh did, being his previous coach. Adam told Josh, “Just remove the dagger from my heart. The decision between you and Delvin was the hardest to make. You deserve to be in this position. You have an incredibly unique voice. I’m so happy you’re still with us.”

Shakira said, “I’m one of your biggest fans on this show” and said he was comfortable and his high notes seemed effortless.

Usher credited Adam with his coaching of Josh, “First and foremost you did an incredible job.  This is a product of a collaborative effort,” (referring to Adam). “This performance has made it so difficult for me.” NEW TEAM USHER: T.J. Wilkins, Josh Kaufman, Bria Kelly
Usher said to his team everything that they have learned he hopes guides them. As for his picks of artists to stay for the live shows are based on the artists that have taken “what I have shown them and they have grown and show promise,” he said to win the competition. His fist choice was Bria Kelly. He chose the next artists because he has “a story yet to be told I believe in your talent and a great representation for Team Usher.” It was Josh Kaufman, followed by last choice T.J. Wilkins