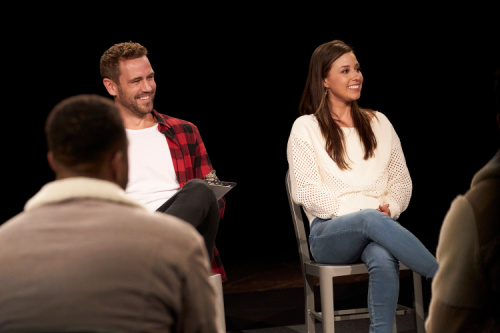 Last week’s episode of “The Bachelorette” left off with Karl purposely misleading ‘Bachelorette Katie Thurston into thinking that there were more men in the house who were there for the wrong reasons.  This created tons of unnecessary drama and stress for the rest of the men in the house and Katie as well.

Katie seemed to nip it in the bud when she didn’t give Karl a rose at the Rose Ceremony.  Although he promised to not leave if he was eliminated in his video confession, Karl eventually walked out the door after lingering for some time.

Then, there was executive producer Mike Fleiss’ Twitter post about the episode being “heart-wrenching” and “we dare you not to cry.”  Okay, so we’ve heard this typed of thing before. But, tonight it was actually true.  Katie had a heart-to-heart and very emotionally enduring one-on-one date with Michael tonight which required breaking out the tissues. 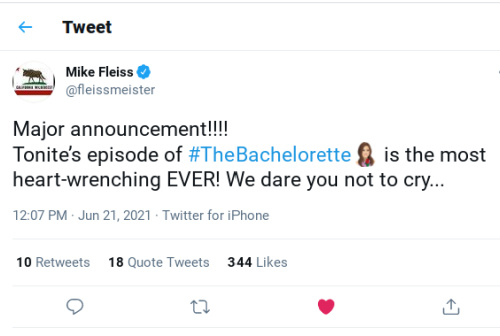 This was after her group date where former ‘Bachelor, ‘Bachelorette and “Bachelor in Paradise” contestant Nick Viall moderated a Group Date where Katie got to hear the men who were on the date more vulnerable and revealing personal stories.  The end surprise was when Katie revealed a secret she had been holding-on to and admitted to telling very few people about.  Right after a guy revealed a similar story where he was the bad guy in the situation.

It was an emotional world-wind episode for Katie for sure which ended with Thomas being exposed by the men in the house his true motivations for going on “The Bachelorette” yet to be brought to the attention of Katie.  We all hope that this will be made crystal clear to her next week.  However, the sneak-peek trailer didn’t seem like that was going to be the case.

FULL RUNDOWN OF WEEK 3 EPISODE BELOW:

The guys were still reeling over Karl giving Katie a false narrative about the intentions of the remaining me.  Then, it was off to the Rose Ceremony.  Katie gave roses to: 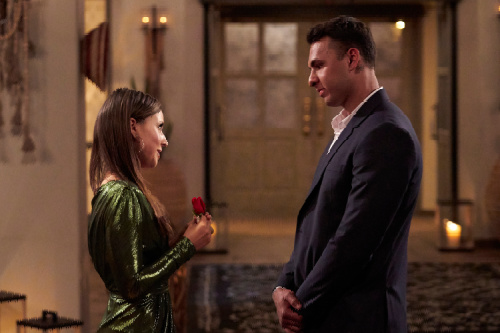 Katie initiated the help of Nick Viall to have the men on the group date open-up to her with their personal stories.  Hunter was called out first who said he’s already formed strong feelings for Katie.  He then told Katie about his ex-wife whom he had a son with.  He said by the time we had our son, I shifted our priorities. He said he worked more to build a stable income for his family.  In effect, he said, he destroyed what they formed and it drove them apart. “I never imagined divorce for myself,” said Hunter.  He said when he experiences love again, he will “maintain that love.”

Katie liked that Hunter put it all out on the table.  “I want to hear their stories. I need to hear their stories,” she said.  Then James opened-up.  Josh said he made a decision “for love or my career.”  He sometimes wonders if he made the right decision.  Quartney also opened-up about a past relationship.  Thomas said the moment he met Katie, he’s been up front “what you see is what you get.”  He told Katie that he couldn’t say he was there for the right reasons because he didn’t know her.  But, the best thing he’s done is “lean in” to the potential.  He said he’ll tell her anything she wants to know and said he went on a date one week before he came onto “The Bachelorette.”  This had some of the guys raise some eyebrows.

Then Connor B. opened-up about something that he said is hard to talk about and would have shared with her in private.  He said it’s a story where he’s not “a good guy” and hoped she sees enough in him where she still trusts him.  Connor said it was when he was around 25-years-old and dropped out of grad school.  He said he worked at a bar and developed a drinking problem.  He would get black-out drunk.  He said his girlfriend told him the terrible things he would say when he was black-out drunk.  He hit rock-bottom when he got drunk and high and cheated on his girlfriend.  Connor said he doesn’t recognize who that person was.

Katie said she didn’t expect to hear that about Connor’s past.  She liked that all the guys opened-up about stuff the they didn’t want to talk about and it made her feel safe with them.  Then Katie told the men about herself.  She said ten years ago on New Year’s Eve, she had been drinking and she was involved in a situation where there wasn’t consent.  “I wouldn’t wish it upon anybody.”  She was in denial so much that she tried to form a relationship with the guy.  When it didn’t work out, she formed a very unhealthy relationship with sex where she didn’t want to have sex.  She said she’s learned to accept things that she can no longer control.

Katie said it’s something that’s she never really talked about because she felt “too drunk, too stupid…But it’s not my fault.”  Nick said Katie seems like she has “a pretty good group.”  Katie said the guys exceeded her expectations and she feels closer to them.

Back at the house: Ironically, Michael who wasn’t on the group date, was having anxiety about wanting to share his story with Katie about being a single dad.  He shared it with Mike.  Michael said he met his wife in 2003.  They were together for 16 years.  Seven months after giving birth, she was diagnosed with breast cancer.  She passed away two years ago.  He said going on the show, he’s taking a risk and wants to start over.  Mike was left speechless with Michael’s story because it’s a nightmare scenario that no one wants to go through.

Katie thanked the men for being “vulnerable and honest.”  They cheered to a good night.  During the After Party, Katie had some one-on-one time with Justine,  Connor B.  Connor B. said Katie has a way of seeing people, and he hasn’t been that seen in a long time.  When Katie told him he’s a catch, Connor B. got emotional then kissed her.

Then there was Thomas who said in getting there (on the show), he didn’t ask for her.  He said when two people come together in circumstances, there’s a reason.  The list of red flags is what Katie wanted to know about.  Then he said she can ask whatever she wants to know.  Of course, Katie didn’t know what to ask.  Therefore, he needed to come forthright with “the red flags” that he mentioned to her.  Thomas dodged her request by saying his intention is “leaving here getting married.”  Katie responded “to be determined.”

When Thomas realized that his time with Katie didn’t go so well, he went back to Katie who was now talking to Aaron, and proceeded to interrupt Aaron’s time with Katie.   Thomas told Katie that he hasn’t felt this way as long as he can remember and feels “a strong pull to her.”  Katie likes how passionate Thomas is with his feelings and she said she’s happy that he’s there. 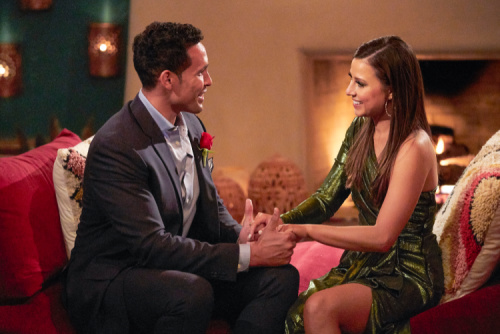 Back at the house:  The guys got the one-on-one date card.  It read:  “Michael A. Love is an adventure.  Love Katie.”

Back to the After Party:  The guys attacked Thomas for dis-respecting them in talking to Katie a second time.  Thomas told them that he told the guys that he went in to tell Katie that he’s falling in love with her.  The other guys were furious at him.

The Group Date Rose went to – Connor B.  There was a sign of relief that it didn’t go to Thomas in which the men would have probably jumped him if he got the rose.

Katie said Michael A. is one of the older guys in the house with a son and she’s hoping to get him to let loose and have some fun.    The date started with Katie pulling up to Michael in a Dunebugie.  Before that, she flipped the Dunebugie. Michael was excited to be on the date.  He said “something he hasn’t felt in a while.”

Michael told her that there’s something “strangely comfortable and familiar” with her.   Katie let him know that she wouldn’t keep him there knowing he’s away from his son unless she’s serious about him.  Katie liked it when he said this experience doesn’t “end in an engagement, it begins with an engagement” and that his life is better right now because of her.

Back at the house:  The guys conversed amongst themselves about not wanting Thomas in the house because they’re not putting up with being disrespected by him.  Hunter warned Thomas that if the drama “seeps-in, in the Rose Ceremony, we’re going to have another really bad night.”

Back to Katie & Michael:  Katie loved that everything with Michael was natural. She said it felt as if they had been talking for a month prior and they just met in-person.  She hoped that their chemistry would continue.   Then Michael decided to share his story about meeting his wife in college, having his son, then experiencing losing his wife to breast cancer in detail.  It was probably the saddest moment in ‘Bachelorette history.  Michael ended with “what a gift to be able to fall in love twice.”

Katie told Michael that she felt very lucky to have him there.  She told him that what he had with his wife was beautiful and she would never be intimidated by that.  She said they went to a whole different level.

Katie said with Michael if they walk away from this together, “it would truly be a forever kind of love” and said it could be the start of her falling in love with Michael.  “It’s so unexpected.”

Back at the house:  The guys were still gossiping about Thomas and how his story keeps changing in regards to his feelings about Katie.   The men got together to confront Thomas in-person.  He said it feels like Thomas is campaigning to be “The Bachelor.”  Thomas denied it.  Hunter asked Thomas point-blank if being “The Bachelor” has ever crossed his mind, and is that bleeding in the way he’s treating Katie?  Thomas answered “before coming here I didn’t know what to expect.”  Hunter asked him again.  Thomas said “yes, coming in to this, one of the thoughts on my mind was potentially being the next ‘Bachelor.”  Hunter said that makes everything clear.

Tre reacted “that was insane to hear,” and was glad that he admitted it because his intentions are out there.   The guys didn’t believe that it’s not his intentions anymore and they were super-protective of Katie.

Next Week:  The guys get waxed.  More drama with Thomas. The guys were anger that “he’s still here!”  The preview ended with Blake Moynes from Tayshia Adams’ season arriving.  The men are about to get another jolt!