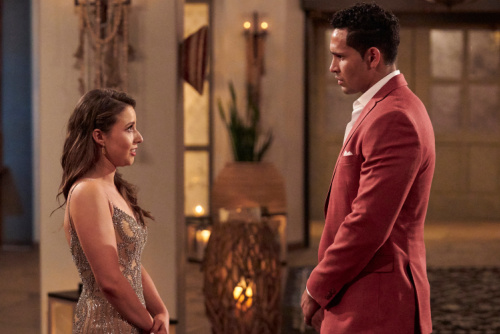 The duo of previous ‘Bachelorette’s Tayshia Adams and Kaitlyn Bristowe continued to mediate Katie’s “The Bachelorette” season 25 by interacting with Katie and the men on the group dates and Rose Ceremonies.  Unfortunately, this season is feeling like there’s a lack of a host let alone two.  But, Katie is taking advantage of getting some insight and wisdom from these ladies.

The drama heated-up this week among the group of men.  This week was mostly about Thomas (where we left-off last week).  The men were zoned-in on getting him exposed to Katie as a fraud.  The group date was a “Truth or Dare” date where the men had to jump through hoops to prove that they’re adventurous and willing to jump into challenges to prove that they’re serious about Katie.  Greg took it to the next level when he professed his love for Katie.

Then Tayshia convened with Katie to tell her a man from her season was there and ready to meet her.  It was Blake Moynes who started out with Clare, then stayed after Tayshia replaced her.  Katie was very apprehensive about his arrival and pretty much said she thought he might be there for the wrong reasons.

By the end of the night, Katie had clarity about both Thomas and Blake. 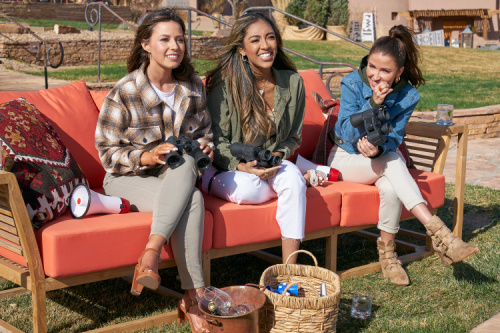 FULL RUNDOWN OF WEEK 4 EPISODE BELOW:

Last week’s episode left off with the men getting Thomas to admit that being the next ‘Bachelor did in fact cross his mind.  Thus, it was their goal this week to get him booted off the show.  This episode started from that conversation.  The men were still upset over Thomas, and Quartney said he felt that Thomas was “manipulating.”

The men on the Group Date had to prove that they’re outgoing and adventurous.  The men were given a challenge that tested them mentally, physically and emotionally.  They were given maps and cameras to prove to Katie and the hosts – Tayshia, and Kaitlyn, that they completed the dares.

One dare included Andrew S. eating a large mountain of mashed potatoes and gravy.  Then there was “a pepper challenge.”  Katie said it was the ultimate test for what a guy would do for her.  “Someone who can step out of their comfort zone and enjoy it.”  Greg was up for the challenge, but had some complications along the way.
He pushed through it and said he loves Katie so much.  “I think we’re going to be so great together!”  Katie was very happy to hear Greg tell her that for the first time! 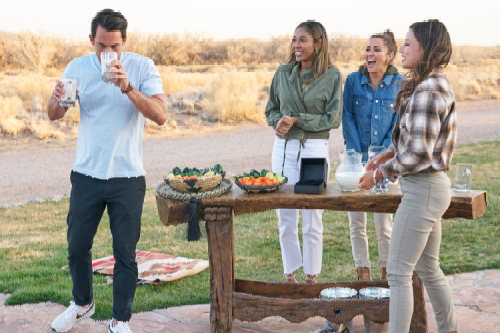 Katie told Andrew S. that “In some ways it can be hard but with the right person, it’s easy.”  They had a romantic kiss after that.  Greg said he felt out of his comfort zone during his alone time with Katie.  He told her “you’re all that I think about.”  She reacted that every time he says something, she knows it’s real and it’s made them “a lot closer.”  Katie added, “obviously I have to seek this out to the end.”  She added  that if it makes them closer, then that’s ideal.  Katie told Greg that she’s falling for him.   Greg said in his confessional, he feels that it’s love between them…”I’m crazy about the girl.”

The guys on the group date were still talking about Thomas amongst themselves.  Tre decided that he was going to tell Katie the truth about Thomas.   Andrew S. advised Tre to “get over it.”  He said it’s for Katie to figure out.  Tre’s argument was that if she looks back at this and sees that Andrew values 15 minutes with her over protecting her from the rest of her life, she won’t be happy.

Josh said Katie has given him the opportunity to open-up.  Then Tre was still telling the guys that they are out here for her and he wants to protect her feelings.  “You care about someone, you want them to know they’re being manipulated.”  Andrew S. was concerned because he didn’t want drama.  Greg agreed that “it should be brought to her attention.”  Andrew S. was opposed to it stating, “she will figure it out.”

Tre went to Katie and used his alone time with her to tell her about Thomas.  He said she needs “all the information that’s available.”  He told her there’s someone who’s not here for you,  “that’s Thomas.”  Katie reacted that she needs to hear these things and asked him to tell her more. When Tre revealed that Thomas said he wants to be “The Bachelor,” Katie was clearly hurt.   She took some time away from the guys to process this new information.  She told a producer that she felt that everything he said was all a lie.  Then cried on the producer’s shoulder.

Katie re-joined the men at the After Party and offered Tre the group date rose for telling her the information about Thomas.  Andrew S. was upset because he was afraid of the outcome being “the big ripple effect” and will affect everyone.  Andrew S. said he has “a bad, bad feeling.”

Katie had a heart-to-heart with Tayshia.  She said she “owed” Katie.  “I have someone who reached-out from my past” who is interested in Katie.  She said he “has good intentions.”  I really feel that he could be that person for you and he didn’t come at the beginning of the season because he wasn’t sure if he wanted to throw himself back into it.  Tayshia assured Katie that “he” is authentic.  But, she didn’t want to tell her who it was because she didn’t want to cloud Katie’s judgement.

“I am literally every single emotion right now,”  Katie reacted to Tayshia.  She said to Tayshia that  the scary part for her is that she has relationships forming and is afraid that this new guy would disrupt that.

Katie went outside to meet Blake.  She immediately knew who he was.  Blake told Katie that she “intrigues him” and “a humor he can relate to for sure.”  Katie said she and Blake have talked through “DM’s” and he commended her on her personality.  She told Blake that he’s the last person that she’d expect to see there and it’s either a “dream or a nightmare.”  She said it’s concerning that he’s dated two Bachelorettes.  She eluded that she’s concerned that he may not be there for the right reasons.  He said the reward is so much greater than the risk and she checks boxes that no one else has.  His worry is the “what if” if he didn’t go through with it.

Blake promised that if it came down to the end and “we connected with the way I think we might.  We’ll be engaged at the end of this.”  He promised that he wasn’t there to disappoint.  Katie told him that she needs some time to take it all in.   In her confessional, Katie said she thinks Blake is there for good intentions.  But,  worried about him disrupting the household and the relationships she’s already built.

Before the Rose Ceremony, the guys in the house noted that they hadn’t seen Thomas or Katie for the last few hours.  Then, we see Thomas going to Katie privately to talk.  Thomas said he was there to “check-in” with her to see how she’s doing.  He said “a lot has been going on in the house” and a lot of the guys in the house, he’s not close to.  He said his character has been attacked and he’s been “demonstrized”   Thomas told her that he’s the guy for her.  He was honest and told Katie how he answered the question of possibly becoming the next ‘Bachelor.   He said because he didn’t know her going into the show, that he was “up for anything,”  and that anything included possibly being The Bachelor.

Katie said there are men in this house that have zero intention of becoming the next ‘Bachelor.  Thomas said the only thing that gets him through this is the possibility of being with Katie.   Thomas said he’s there to see where things go with Katie  Thomas said “these guys want to paint me into something that I’m not.”  He told her that when he wakes up, she’s all he thinks about.  Katie was still apprehensive.   She told him “it’s devastating for me right now.”  He said that’s why he’s there with her right now.   Katie walked Thomas out and said she’d see him at the Rose Ceremony.

The guys were hoping to see Katie walk-in without Thomas.  What they got was Thomas rejoining the group of men.  He told them that he wanted to talk to Katie and “have a hard conversation about his intentions here.”  He said he felt he had the respect for them not to take up time away from the men during the Cocktail Party.  The men were still upset.  One guy said “it’s midnight!”

Andrew S. and  Aaron had a heated argument about Thomas in front of Thomas.  They complained that  about the outcome of Thomas still being there even after his intentions were brought to light.  Then, Katie came to the men and told them she’s sorry for being late and apologized for Thomas being “ostracized.”  She then said she wanted to get the Cocktail Party started.

Justin told Katie that he was glad that Tre was on the Group Date and told Katie about Thomas and that if he didn’t come forward, he would have.  Then, Aaron wanted to talk to Katie about Thomas also.  She was beginning to feel that it was exhausting.   When Michael came to her for one-on-one time he told her that he is “so lucky” to have the date with her.  She told him she was wondering how Ohio is for him and if he’s willing to go somewhere else.  Michael said “you can’t manufacture a connection” and the person she is, is the person he’s been seeking.”  Katie said Michael has the kind of energy that “uplifts you” and helped her forget about the drama with Thomas.  She was ready to make her decision.

Before the Rose Ceremony, Katie confided in Kaitlyn and Tayshia that because there’s doubt with Thomas, that she should send him home.

The men were FLOORED when Katie called Thomas’ name for the final rose. Then she said “you told me things that I wanted to hear.  But, what I learned is that you’re selfish.”  She then told him that his ‘Bachelor audition was over and to get out.

Katie told the men that she can’t emphasize enough that they need to be there for the right reasons.  Katie then said she has to follow her heart then went to see Blake who didn’t have any clothes on at his room!  She told him that she has to follow her gut in everything and invited Blake to stay and “see if this becomes something if that interests you…hopefully the wait’s worth it.”

NEXT WEEK:  Sparks fly between Katie and these men: Greg, Andrew, Blake.  Hunter said “she’s not going to end up with Blake.”  Hunter said he’s “competitive as hell and they’re going to find that out.”  Apparently, Hunter is responsible for a game injury in next week’s episode.