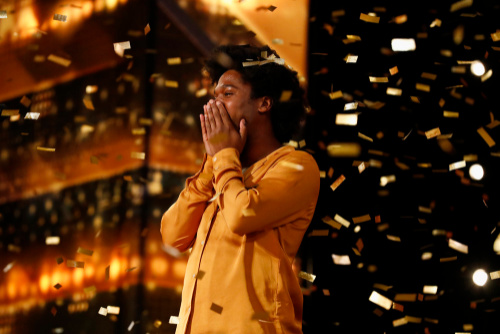 The fourth week of “America’s Got Talent” season 16 auditions included some really original acts unique not only to the AGT stage, but unique anywhere!  They included a boy band who’s agenda is the opposite of a mainstream boy band; a singing dog and it’s owner; a hilarious comedian; a young magician; incredible singers.  One singer in particular knocked it out of the park when he proceeded to sing a song that Simon Cowell warned may not end well.  Thank goodness he continued because he got judge Sofia Vegara’s Golden Buzzer.

Then there was that practical joke at the end of the episode that Simon played on Sofia when he brought back danger act Ryan Stock and Amberlynn.  Fans of the show will remember when they competed on AGT season 11 and had the mishap when Amberlynn shot a fiery arrow into Ryan’s neck.

Shouffolution said they’ve been practicing together for three months.  They do shuffling. They said they aren’t professional dancers and have been making a lot of videos on social media.   After their audition, the judges gave them a standing ovation. Heidi and Howie “love it!”  Howie said they put something that’s already on a trend and put more energy and moves on it.  Sofia said she loved the outfits, the music and the diversity in the group.  Simon said it’s “next generation”  They have personality and energy.  It was a “yes” for the group.

Pam is 36 years-old, an office worker from Pasadena.  She said she thought the dream was over and content with working in the office.  Then she met Casper, her dog.  She said Casper was the cure to her stage fright.  “It was an instant connection.” Casper is a singing dog.  She said one day when she was playing guitar and suddenly a noise came out of him.  Before AGT, they had only sang at a talent show at work.

Sofia called it “one of the most adorable things” she’s seen in a long time.  Howie joked that the last note that Casper hit was so “moving and emotional” and Pam didn’t even need to be there.  Heidi said Pam was hogging the mic a little.  Simon joked that Casper should go solo.  Simon said Pam wasn’t great but Casper was good.  Simon voted “yes” along with the rest of the judges. 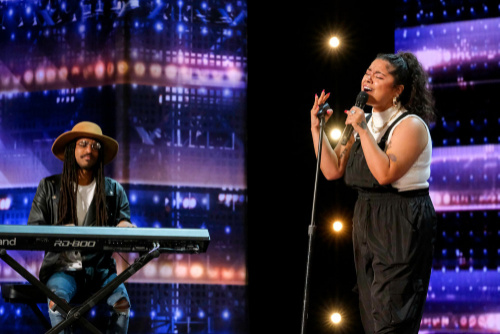 Brooke is  from a tribe in Hollister, North Carolina.  Brooke said her music was inspired by her culture and she has 90 seconds in her AGT audition to make her tribe proud.  “I’m going to kill it.”  Brooke, who competed on “The Voice” season 13 in 2017, said singing in front of Simon Cowell has been a dream of hers since she was 16-years-old.  The goal, she said, is to be the first Indigenous Pop star.  Her husband came out on stage to play keyboard for her.

After her audition, Sofia told Brooke that she has to figure out a way to do this for the rest of her life because she was having so much fun on stage.  Howie called her “a power house” and predicted that she would be playing bigger venues. Heidi said she has the whole package to be a real star.  Simon said he was reminded of his time on “American Idol” when people like Kelly Clarkson, Carrie Underwood, Fantasia, etc. would come on with great personalities and fantastic voices.  It was all “yes” votes for Brooke.

Roman came from Israel to perform a “yoga show” on AGT.  Simon buzzed him right away.   Then,  a glass box that was 9″ wide was rolled onto the stage.  Raymond slowly bent himself and manipulated his body to fit inside the small glass box.    His daughter came out on stage and was crying.   She said her dad’s biggest dream was to perform on AGT.  Simon apologized for buzzing him too early and took his buzzer back.  Howie said he loves that Roman made it a family business by having his son there assisting and his daughter joining them.   Heidi thanked him for coming all this way to show his art.  Sofia said she wanted to cry and pull her hair out and she loved it.  She voted “yes” along with Heidi, Howie and Simon.

Members in the group all come from the Broadway and the film world. They came together to express a message of unity.  They consider themselves a choir.  They sang a new arrangement of the “Stand Up” song and added “choir stuff to it.”  As they sang, there was some tap dancing included.

Howie reacted that the appreciation for humanity, more than inspired.  “You are an event!”  Heidi said there was so much going on.  “I felt you guys.”  Sofia said everyone that is watching is going to have goosebumps because it was spectacular and each one of them is a star.  She felt like she was watching a Broadway show.  Simon called it “a moment” and really said they turned those two minutes into a special moment.  “It was really, really amazing.”   Howie was the first judge to vote “yes” followed by “yes” votes from the rest of the judges.

Magician Shoji, who is nine-years-old, said one of his favorite magicians is Shin Lim (AGT champion).   He told the judges he started doing magic three years ago.  When asked what he would do with his winnings if he won, he said he’d buy tacos and dogs if he won the million dollar prize.  Howie asked if he thinks he was born with magic powers.  Shoji answered “yes.”

Shoji went down to join the judges to perform a coin trick in front of them.  He then pulled-out a deck of cards, which he said was from Shin Lim.  Howie was given a card to hold his hand over on top of the table.  The card was the Queen of Hearts.  But, when Shoji pulled the card from under Howie’s hand, it changed to the Queen of Spades.

Heidi said she can see that he’ll be as big as Shin Lim one day.  Howie said he’s as good as people twice his age  Simon said he’s so cute and charming. “You have to be a bit crazy and believe in magic.”  He said Shoji is sort of like Harry Potter.  He has magic powers.  The judges gave him all “yes” votes.   Shoji was so emotional from the judges’ reactions.

THE OTHER DIRECTION (Boy Band) 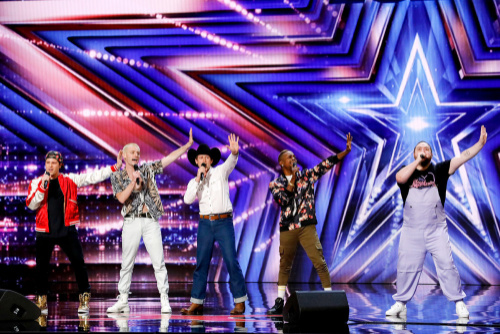 Pictured: The Other Direction — Photo by: Trae Patton/NBC

Self described as the “gayest boy band,” The Other Direction all met at show choir camp and came-out to each other.  They were only 12-years-old at the time.  They made a pact that when they turn 21 they would form the “gayest boy band.”   They sang original song “Gurl Ur the Best.”   Each member introduced themselves – Alex “the jock,” Norm “the cowboy,” Jason “the party boy,” Greg “the mama bear,” and Devan “fashionista.”

Heidi said their performance wasn’t’ long enough.  Howie called them “so funny.”  They were flattered.  Sofia said the whole thing was fantastic.  Simon said they were “very clever.”  I’ve auditioned so many boy bands that were terrible.  But, their song was memorable and he gave them a “yes” vote.  Simon liked that they were funny.  They got “yes” votes from the rest of the judges.

Charlie is 62-years-old from New York, NY.   In his back-story, Charlie said he started training classically.  He decided to make money as a bookkeeper.  But, never lost his passion, he said.  Charlie came out on stage dressed in drag and with a puppet.  He’s a ventriloquist.  However, the judges couldn’t hear what he was saying.  Then the act got worse when Charlie started singing a Cyndi Lauper song.  He got buzzed from all the judges.  Simon called him the “worst ventriloquist” they’ve ever had.  Sofia said it’s a nice hobby, but not for AGT.

Josh said his parents gave him a stage name so he had to go with it.  He has cerebral palsy.  He joked that he has to get that out of the way because most people think he’s drunk.  Josh said after the year they’ve had, “the world is ready for some laughter.”
Heidi said she liked him a lot and he checked all the boxes too. Howie said Josh is like a superhero. “We need to smile and you brought the medicine.”  Sodia said it’s her favorite comedy when people can make fun of themselves and he’s inspirational.  Simon called him “funny with great material.”  Simon asked “what’s the absolute dream here?”  Josh answered, “to win!”  He got four “yes” votes.

Michael is from Brooklyn New York,  He told the judges he put a video of himself singing online and got 1 million views one night.  The judges and audience were disappointed when Michael started singing.  Simon said Michael sounded like wolves howling and “it was horrible.”

The next singer contestant, Fallyn, also got a “no” from the judges.  She’s 17-years-old and said she’s been watching the show since she was little.   After her audition,  Simon responded,  I think you’re talented, but come back in a year.

Jimmie is from Portland, Orgeon.  He said he thought it was the perfect time to come onto AGT.  “When opportunity presents itself, you run toward it,” he said.   Jimmie prepared to sing “Tomorrow” from Annie.   When Simon read that, that was his song, Simon said “that is my worst song in the world.” He advised Jimmie to do another song.  Jimmie reacted that he didn’t have another song.   Simon said “all I can say is good luck.”   Everyone was taken aback when Jimmie started singing and the most perfect, angelic voice came out of him.

Simon’s reaction, “wow, it’s not my worst song anymore.   “Unbelievable…unbelievable.”  Sofia said, “I have to say I didn’t like it that much.  I loved it!”  Then gave Jimmie her Golden Buzzer.  @Jimmie_Herrod

Danila said dance chose her.  She said when she shaved her head, it made her realize that being a woman wasn’t attached to her hair or body.  “When I step on stage, I will show the world who I am.”   She had a large hook at the top of her hair bun.  Another hook came down to attach to her hair hook, then pulled her up.  She floated above the stage then came back down and did different movements.  She was raised up again and she spun around really fast in the final leg of her act.  Danila got a standing ovation.
Simon reacted “we weren’t expecting that.”  Sofia said she’s never seen anything like that and asked if she’s going to be okay long term? Danila laughed and answered “yes.”   Heidi said, “it’s a great surprise. Thank you for that.”  Howie said his wife, if she goes out and has a tight ponytail she complains about having a bad headache and no one’s pulling her up by the hair.   Simon asked if she’s the best at what she does.  Danila answered “I am the best that I can be at the moment.”  She got all “yes” votes.

Simon initiated the help of former AGT danger act contestants Ryan Stock and Amberlynn to play a practical joke on Sofia.  They were on AGT season 11.  Sofia was not there during that time.  But, she said she heard stories.  The first part of their act, the two took turns shooting arrows at balloons.  Then, for the second part of the act, they called Sofia and Simon’s help on stage.  They blind-folded Sofia while Simon got into a fake wounded position, as if she really shot him with the arrow.  Sofia was instructed to shoot off the arrow while blindfolded.  When she took the blindfold off, she was terrified that she had shot Simon.  Of course when she discovered it was a joke, she played it off.   But warned Simon that she’s Colombian and they always get revenge! 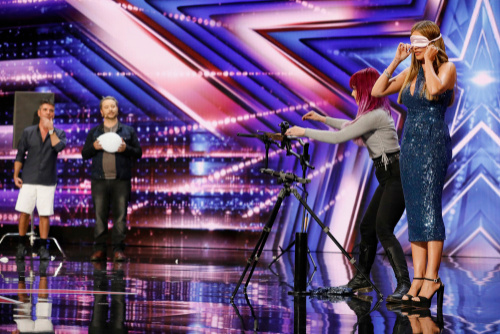