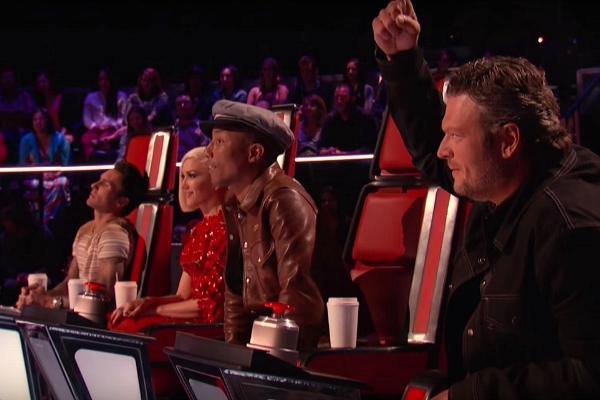 Super-star musical artist coaches Adam Levine, Gwen Stefani, Pharrell Williams and Blake Shelton returned for season nine of NBC’s singing competition reality show “The Voice”. As in past season’s, the coaches were hot to get some talented artist, more so in the Country music genre. Just when viewer’s thought that Adam, Pharrell, or Gwen were about to close in and seal the deal (so to speak) by winning their mentor offerings to a talented country singer, Blake swooped in and stole the show.

Not until night two of the two-night season premiere was there a country artist won-over by Adam. 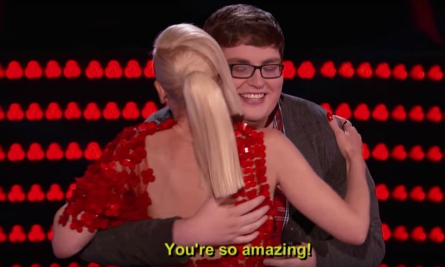 In night one, for the first time, “The Voice” showed viewers a Blind Audition from the listening perspective of the coaches. When contestant Jordan Smith entered the stage, we heard his unique, clean and perfect vocals as he sang Sia’s Chandelier. With the turn of the first chair, which was Adam’s, we then saw the contestant whose sound did not quite match-up with his look. It was a sweet surprise. Most overtly shocked was Gwen.

Her idol is Janelle Monae. She got pregnant in college, currently working at a bank and proving to her family that her life is not ruined.

Adam turned his chair midway through her audition. Then Blake came in at the end, annoying Adam. Nadjah ended up picking Blake. She’s Blake’s first artist of the season.

He’s a survivor of a tragic accident and going after his destiny to e fulfilled on The Voice, He sang a Garth Brooks song. Blake pressed hi button within seconds of Barrett’s audition, followed by Gwen, Pharrell and Adam

He said he’d like to pioneer sound with country music and soul. Adam called Barrett his favorite because he could hear all styles in his sound. It was no contest because Barrett chose country star Blake. Blake said he is blown away by Barrett and his swager.

15 years old whose been playing with a band for six years and got his start in church.

On his last note of his ,audition, both Pharrell and Gwen turned their chairs. Pharrell was impressed by his octives and said Braiden is an “old soul”. Gwen told him she knows how to help him and knows how to fight for him from having sons. Braiden went with Gwen, and the tune “I’m Walking on Sunshine” began to play. Gwen said what impressed her about Braiden, “it’s shocking that someone that young can have that many tones”.

Unfortunately an artist that did not get any coaches to turn around was Michael Woolery. His great grandparents are the Nelsons from ’50s, 60’s sitcom “The Adventures of Ozzie and Harriet” and his dad is former host of “Love Connection”, Chuck Woolery. The advice that Adam gave him was the self confidence has to be impressive and his lack of it, took him out of it. Gwen said he was too much in his head. Pharrell advised him to get comfortable with a few songs where he’s not thinking so much while singing them.

Regina is a Disc Jockey. Pharrell said he made a mistake by not pressing his button. Blake and Adam pressed their buttons. Adam turned his chair because he said she is “an incredible talent”. Blake said “sometimes you have to just give people an opportunity to get up their and shine.” Adam fought back by telling her he loves her.

Blake, Pharrell and Adam turned their chairs for the 16 year old. He considers himself a country artist. Pharrell told Zach he’d love a shot to work with him since he didn’t have a country artist last season. Adam told Zach that he looks like Superman. Adam reminded him that he has no country singers and doesn’t want to see him get lost in Blake’s shuffle of Country artists. Blake said it’s important to know what the pulse is of Country music and that’s what he lives for and told Zach to come onto his team. Zach chose Blake. Blake predicted that Zach is going to be a dark horse.

Patty Loveless, Dolly Parton, and Johnny Cash are 16-year-old Emily Ann’s music inspirations. She love Bluegrass and classic Country and has never had vocal lessons. Adam and Blake turned their chairs. Adam argued that he has zero country artists on his team. He told her that he hoped that she can choose passion over – Blake finished “common sense.” She chose common sense and picked Blake for her coach.

Among singing gigs, 20-year-old Evan also sings at a Senior Citizen home. Blake was the first coach to turn his chair, followed by Pharrell and Adam, lastly Gwen. Blake told him it would be a lot of fun to get to work with him. When Parrell requested Evan to sing a verse of “Overjoy” by Stevie Wonder, he nailed it and caused Gwen to cry, which she got on stage to show him.

She is a bartender who formed her own band “One Shot Ellie” and said she’d love to work with Gwen. Adam, Pharrell and Gwen all turned their chairs. However, Gwen was the clear winner when after she turned her chair, Ellie paused to jump up and down and scream, then continued singing. Adam complimented her tones and Pharrell said he loved the way she used the rasp in her voice and her style. Ellie chose Team Gwen.

He’s 30-years-old and a paramedic with four sons. He started doing YouTube videos in 2010 and got invited to go onto Ellen DeGeneres, then got a record deal with Warner from Nashville, but they dropped him soon after. Within the first few seconds of his audition, Adam, Gwen and Pharrell turned their chairs. Then Blake turned. Pharrell called James a natural and a “multi facet singer”. To everyone’s surprise, James picked Adam. Adam fell to the floor in shock. James said he think’s Adam is a unique coach and wants him to pull him a little bit out of the country box.

There were two more contestants whose voices weren’t compelling enough for any coaches to press their red buttons. Bryan Bautista sang “Locked Out of Heaven” by Bruno Mars. Adam said Bryan’s range was “crazy” but “a little squirrely up until that point” and invited him to come back. Gwen complimented his top notes which “were really strong.”

Natalie Yacovazzi also had no luck with gaining a coach. She’s a credit card processor and single mother. Blake said there were parts of the song where she sang too sharp. Pharrell said thinking gets in the way and there were no feeling behind the song. Adam told her she has to keep swinging and the song she sang “Oh Darling” is a challenging one.