Leaving It All On The Stage! THE VOICE – Season 5 Battle Rounds Week 2 Recap

As Syfy network’s sixth annual “31 Days of Halloween” month concludes, it seems the network saved the best for last while tackling an honored Halloween tradition in horror movies – zombies! The movie is called ‘Zombie Night.’

‘Zombie Night’ opens with what at first seems like a typical road accident where there has been a body badly injured on the road. A look at it a little closer, and notice that something just isn’t right. Two of the spectators of the scene a father and daughter played by actors Anthony Michael Hall and Rachel G. Fox driving through it notice some peculiar movements from the corpse on the ground. 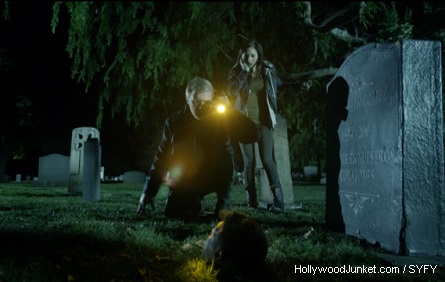 Topped by an unintended detour into a graveyard after hitting a runner on the street makes it pretty clear what’s going on. Zombies are amuck and it’s time to run for cover and so begins the adventure in staying alive which is what all of the characters’ are trying to do in “Zombie Night.” News reports of “the dead able to reanimate” show apocalyptic type chaos happening in the streets. People are looting local businesses, stealing, and being chased and eaten by zombies. The news reporter says “evacuate your home or shelter on the order of the local authorities.” The problem is, there are no police that are actually really able to help anyone before being eaten themselves. Even worse, 911 is down and callers get a recording!

‘Zombie Night’ is a traditional zombie movie done in a classic way. It has the right amount on campiness, humor, and special effects (maybe more gore needed for die-hard zombie movie fans) to immediately pull viewers in, keep them interested and invested in the characters and the storyline. The film pays an honorable tribute to “Night of the Living Dead” which I’m sure director George A. Romero would be flattered. Unlike the zombies in “Night of the Living Dead”, however, these zombies could not break through glass and doors. So there was no need for residents to board-up their windows. 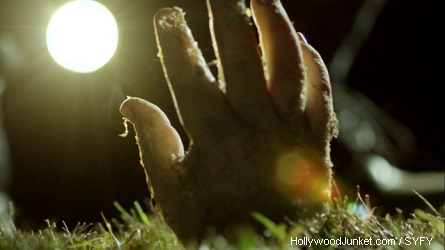 This soon-to-be a Syfy cult classic movie does address some tough scenarios. Such as putting families into the unfortunate circumstance of having to kill each other – a daughter (played by Daryl Hannah) has to kill her her mother (Shirley Jones); a cop faced with the dilemma of shooting a toddler; and a mother who refuses to shoot her teenage son after he’s turned into a zombie. It also addresses human morality. What would you do if zombies were surrounding your home and your neighbors and good friends of eighteen years were pounding on your front door to get inside? Is opening your door worth the risk?

Some things us humans can learn from ‘Zombie Night’ that aren’t such great ideas if ever running from a flesh hungry zombie – entering into a manhole for safety. Not such a good idea. Remember there were zombies in Michael Jackson’s “Thriller” video that came up from a manhole. Another bad idea, going into a cemetery wall vault to hide! Really not a great idea! 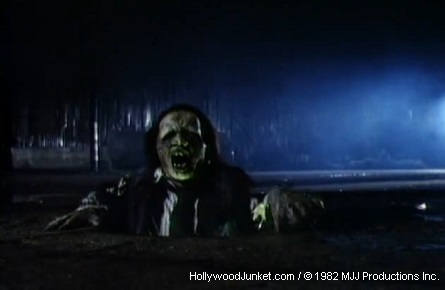 Pictured: Zombie in “Thriller” music video escapes from a manhole.

The story stays with the popular zombie myths like killing a zombie requires a gun shot to the head, and the second one is that they all become inactive when the sun comes up. But, will they come alive again the next night?

Don’t go out this Saturday night. Instead, stay at home and hide in the dark while watching Syfy’s zombie apocalypse ‘Zombie Night’! It premieres this Saturday, October 26, at 9/8 central.