The Jungle that is THE INTERVIEW Movie Review

Take on the World! THE VOICE Season 7 Winner Finale Recap

The Jungle that is THE INTERVIEW Movie Review 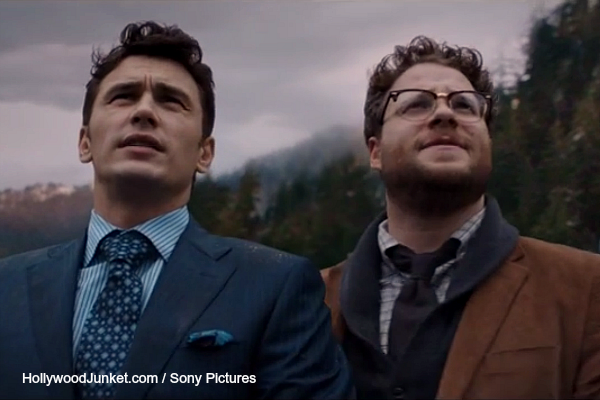 WARNING! This Article Contains SPOILERS!
Successful entertainment news and gossip television show “Skylark Tonight” hosted by Dave Skylark (James Franco) which covers much of the same type of celebrity news and gossip as real-life news program “TMZ” is the focus for what brings about the interview between Dave Skylark and North Korean dictator Kim Jong-Un (comedically played by Randall Park) after Senior Producer Aaron Rapaport (Seth Rogen) is belittled by a peer that his show’s news isn’t “real news” at all. 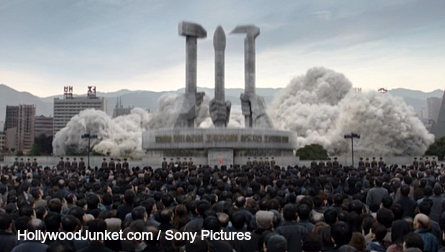 Pictured: North Korea in “The Interview”

They are a proven successful team of ten years in entertainment reporting. The eccentric host Skylark describes their power team as Rapaport being the Gandalf to his Bilbo Baggins. Oh yes, other references are made to “The Hobbit” movie, along with singers Katy Perry and Taylor Swift.

Some of the teams success’ consist of popular rapper from the ’90s Eminem coming out of the closet on air during an interview when he admits to “playing gay peek-a-boo” and “leaving a bread crumb trail of gayness” in the lyrics of his songs. Another coming-out, but by Rob Lowe who exposes his real baldness, covered by a wig all these years. Yet another one which Rapaport mentions with embarrassment – covering the “flopping-out” of Nicki Minaj’s vagina in a wardrobe malfunction. This in turn causes much pressure placed upon Rapaport from publicists to pull the plug on many of Skylark’s interviews. So, when these two score an interview with one of the most famous men on the planet, they get a bit of doubt from the journalist community.

After discovering that North Korean dictator Kim Jong-Un is a big fan of their show, Skylark suggests that they go for setting-up an interview with him – potentially scoring “the biggest interview on Earth!” 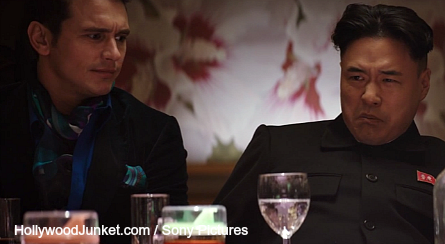 Soon after landing a confirmation from the North Korean regime that will allow a one-hour interview to take place on their soil, more jabs of criticism are taken at the duo Rapaport and Skylark by colleagues including Bill Maher as they express their lack of faith in their competence to pull-off such a feat adequately. Skylark’s immediate reaction is that they are “KY Jealous”, and “they hate us cause they ain’t us!” 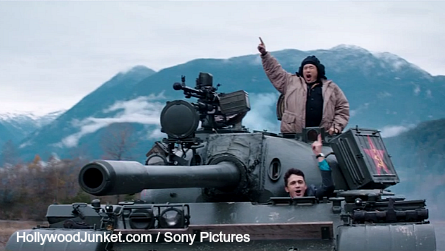 A plan is devised by CIA agents Agent Lacey (Lizzy Caplan) and Agent Botwin (Reese Alexander) that involves “taking out” the Supreme Leader over a period of 12 hours. However, Skylark’s preferred plan would be shooting a cap into Kim Jong-Un on live television making it the TV event of the century, then coming out with a “tell-all” book about all of his experiences including this North Korea one. Agent Lacey warns of the 31 year old “bad-shit crazy” North Korean leader Kim Jong-Un who Agent Lacey compares to Hitler and describes him as a “master manipulator”.

Memorable scenes include when CIA agent Lacey visits the guys after a hard night out; when the CIA must ship a new poison strip to the men after traveling to North Korea, and the sequence of scenes when Kim Jong-Un takes Skylark out in his tank where he exposes his vulnerabilities perfectly expressed in Katy Perry’s song “Firework”, followed by a fun night out on the town. Then, of course, there’s the actual interview scene where Skylark sits down with the Supreme Leader Barbara Walters style. 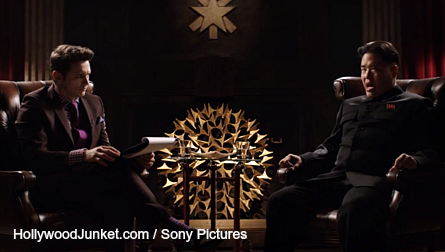 During their time spent together Skylark and Jong-Un played upon each others weaknesses which in turn are used against each other during their live interview. Once Skylark is no longer fooled by Jong-Un, it frees him to get back on track to the original goal placed upon them by the CIA. 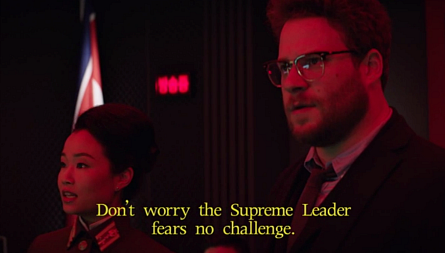 After things unravel, the end result goes just as Skylark had originally planned. It’s doubtful that the infamous Sony Hack had anything to do with the non-theatrical release of this movie. However, viewers will see what can clearly be an upsetting display of the fate of Kim Jong-Un in this movie.

“The Interview” is a very well-done satirical piece of work if you are into cheesy type of funny action films reminiscent of “The A Team” TV series from the 1980s. The Interview characters are all very entertaining to watch. No serious threats here. Just pure and sometimes grotesque fun.

“The Interview” opens Christmas Day, Thursday, December 25 in select movie theaters and is available to watch online on Google Play, YouTube, and Xbox.