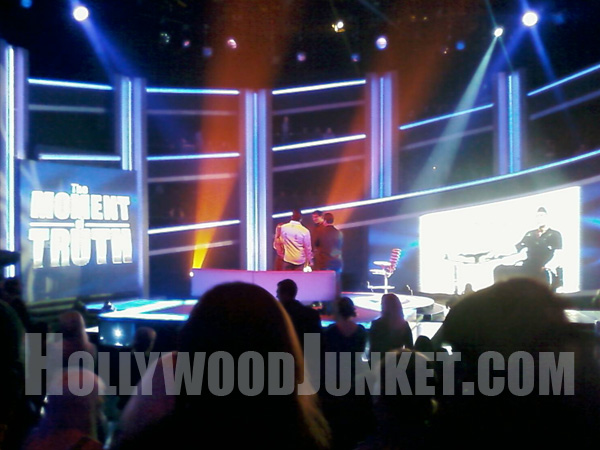 SPOILER ALERT! SPOILER ALERT!
(Above photo) Former Oakland A’s baseball player, Jose Canseco on stage surrounded by friends and family before the taping of his episode.
“The Moment of Truth” is technically in it’s Sophomore year, the second season, though other sources have stated the show already airing a second season during it’s last round of episodes in May.

One of the goals the show had been working on was to bring-in a well-known figure to play the game. Well, they achieved that this season. The show had special guest, AL MVP former baseball player, Jose Canseco.

For fans who’ve followed Canseco’s career and personal turmoil will appreciate the importance of having him sit in the show’s “hot seat”. After writing about his steroid usage while playing in Major League Baseball in his tell-all book, “Juiced”, he was called to a Congressional hearing along with other players whom he called-out in his book.

Conseco’s guests on “The Moment of Truth” were, his girlfriend; twin brother Ozzy (who played in the Major and Minor Leagues), and his friend Andrew.

While in the “hot seat”, Conseco’s demeanor was very relaxed, confident, and straight-forward. When the episode airs, viewers will also get an in-depth interview by host, Mark Walberg, along with the questions for the game. Conseco did not hesitate on the majority of his answers while playing the game. He did, however, take much hesitation on one particular question that Walberg asked during his interview. That was, if he intends to marry his current girlfriend.

Fans will also get a lot of burning questions answered, and some speculations about the famous baseball player cleared-up. For example, he answers questions involving former team mates, Alex Rodriguez (a.k.a., A. Rod), Mark McGwire, Roger Clemens, as well as ex-wives Ester, and Jessica. Canseco made some candid, voluntary negative remarks about some of his past team mates during his time on-stage. We’ll see if those make it into the final edit of the show.

Other guests so far this season include: a former Dallas Cowboys Cheerleader who’s now a dancer in the Las Vegas show, “Fantasy” at the Luxor, a transvestite, an Alien UFO abductee, a married couple take the hot seat together, a struggling Entrepreneur, and special guest to an MAA fighter contestant, writer, and ex-fighter Baz Luhrmann.

Check back later this week for a final wrap-up on this season of “The Moment of Truth” and audience interviews.