THE SING OFF: Pentatonix- Winners ‘From the Future!’

THE SING OFF: Pentatonix- Winners ‘From the Future!’ 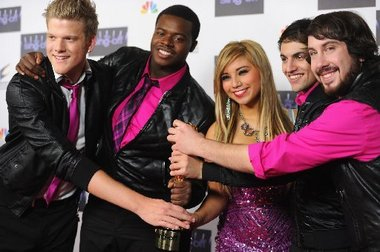 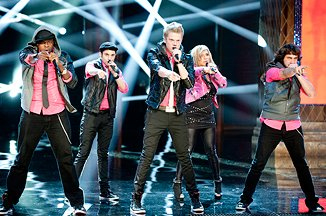 In a conference call this afternoon with the group, they said that the winning moment for them was “surreal”. Lead vocalist, Scott stated, “We were all in shock”. Pentatonix said that what’s next for them is do put an album together. “The Sing Off” grand prize awarded is a Sony recording contract and $200,000 in cash.

“The Sing Off” judge, Shawn Stockman described “Pentatonix” as being from “the future”. Is it difficult to live-up to that? Pentatonix reply was, “We have to think creatively…stuff that hasn’t been done before. We are thankful that we have group members from different styles”.

Their ultimate goal is to be the first a cappella group to go main stream in a big way. They said that the barrier that is there is “the fact that there is no production. The radio stations want to hear that production [of instruments].” When asked about how they plan to use the internet to their promote their music, their reply was to use social networking sites like Twitter. One of their band mates, Kevin was found via a Youtube video.

Fans can see “Pentatonix” next on television on the upcoming NBC Christmas Special titled, “A Sing-Off Christmas” where they will be performing with past “The Sing Off” winners and groups from past seasons. The special airs Monday, December 5 (8-10 pm ET). Fans can also purchase “Songs of the Season” which features the top 12 groups from “The Sing Off” this season. The CD also includes two songs from past winner, “Committed”. Pentatonix sings “We Three Kings” on the Christmas CD.