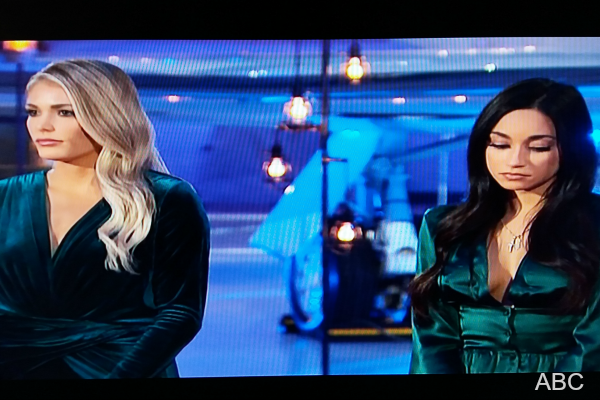 After six weeks of narrowing down his options and best contender for a future wife, “The Bachelor’ Peter Weber went into week seven with four women left.  In this episode, Peter went to the home towns of the four women to meet their families and to further determine who’ll be the perfect fit for him.

Peter’s first hometown date was with Hannah Ann.  When she took him home to meet her family,  Peter had a chat with Hannah Ann’s mom.  He told her mom that Hannah Ann has expressed that she’s falling in love with him.  He said he knows exactly how he feels about her. Mom said her dad would really”need to hear some version of that.  He’s really guarded and is not just going to give her away,” she told him.   Ultimately, telling Peter until he is sure, her husband won’t be sure.  Peter told Hannah Ann’s dad that “it just gets better and better every time he’s with her.”   He said “there’s something real here.”  He revealed that he is falling in love with Hannah Ann.  Dad told Peter NOT to say that word to Hannah Ann unless he’s 100% sure and ready.

As they said goodbye to each other multiple times, Peter said (again) in his confessional that he wants someone who wants him as badly, and with Hannah Ann, he’s feeling that.

Kelsey and Peter went wine tasting.  But, first, they had to smash the grapes!

Kelsey said she knew she was in love with Peter last week in Peru, but didn’t say anything.  She wanted to wait before he met her parents.  After their wine tasting, she told Peter that she knows she’s in love with him and “I know my family will see that.”  Peter responded by kissing her, then told her thanks for telling him.  “I’m happy with that.” He also stated that he can see a future with her.  Kelsey admitted that it’s always disheartening to be the first one to say it.

When the got to Kelsey’s family’s place, Kelsey talked to her sister.  Kelsey told her sister that her relationship with Peter started-out fun, then turned more serious.  Her sister asked if he proposes, what will she say.  Kelsey answered “yes.”  Peter told Kelsey’s mom that they connected on such a deep and emotional level.  Her mom said when Kelsey loves, “she loves like no other.”  And, no one’s ever done this.  She told Peter not to break her girl’s heart.

Kelsey told her Step Dad that Peter hasn’t said he loves her, but she knows “he has strong feelings.”  After Kelsey told her mom that she told Peter she loves him,  Mom said she’s concerned about Kelsey’s heart in her confessional interview.

Madison welcomed Peter to her hometown of Auburn, Alabama and immediately took him to the university where her dad coaches.  They were welcomed by a big LED screen that had their names displayed on it.  Peter got strict orders from Charles Barkley not to hurt Madison from the ametron screen.  Then, Madison’s dad’s boss came out and instructed them on some basketball play.  Madison did her best to beat Peter in a basketball game.  Peter said he loves how competitive she is.

After the game, Madison said in her confessional, that “after tonight” she could definitely be falling in love with Peter.  Dinner with Madison’s family was next where Madie got “the special plate.”  Madison’s mom explained that each night at dinner, one of them gets “a special plate.”  That means everyone around the dinner table says something nice about the person with the special plate.  On this night, they chose Madison.

After dinner, Madison and her mom had a private chat.  She told her mom that she has not yet told Peter that she’s saving herself for marriage.  While that was happening Peter was having his own private talk with Madison’s dad.  Her dad asked him if he knows.  Peter answered “if this was the last the week…I just can’t give you an answer right now.”  Dad said Madison is her first-born and it’s his job to protect her.

Madison’s dad told her that he’s concerned that it’s been a short period of time and doesn’t want her to do something she doesn’t want to do.   He’s not ready to say that Peter is the man for her.

Peter went to Victoria’s hometown of Virginia Beach.  They played dress-up in traditional Victorian era attire.  He said he knows that a life with Victoria will never be boring.  They went to the beach next.

While they were at the beach Victoria said she can finally be herself around him.  Then she took him to a  local party where Hunter Hayes was playing.  Thus, correcting their first date which was ruined when they were serenaded by Victoria’s ex-boyfriend.  Victoria was so happy and felt that she was going to get married.  Peter said he wants to marry his best friend and felt that they are on that track now.

Someone named Marissa, grabbed Peter to the side to speak in private to talk to him.  Marissa told Peter that she doesn’t think he deserves who he’s on a date with right now. She said she was friends with Victoria, and there’s been “many relationships broken-up because of her.”

While Victoria was waiting for Peter to meet her family, she said in her confessional that she realizes she’s falling in love with Peter.  When Peter showed-up outside her parents house, he talked to her first about the warning he was given by Marissa, whom turns out to be his ex.  Peter told her that he had an ex at the concert earlier who warned him about Victoria causing a lot of other relationships to end.  Victoria reacted that she couldn’t believe that Peter was bringing that up right now before meeting her family.  She was angry that Peter felt what Marissa had told him was more important than meeting her family.

Victoria was heart-broken because she was going to tell Peter that she was falling for him.  Instead, Peter said goodbye, and left.   After he rode off, Victoria’s mom came out to console her, followed by her whole family.

The next morning, Peter was conflicted about how things ended with Victoria the night before because he has strong feelings for her.  Then, Victoria showed-up at his hotel room.  She apologized for how things went down when he left.  Victoria told him she’s falling in love with him.  Peter responded that it seems that she doesn’t want him to love her how he wants to love her.   Peter explained that it always seems that he’s at risk of Victoria leaving him at any given time and it’s scary for him.

Peter said even though he didn’t meet Victoria’s family, he sees the potential there, and they did have a great date.   Victoria was sure that her and Peter are “probably not moving forward” because she didn’t really get a hometown date and he didn’t meet her family.

Peter handed-out roses to: Hannah Ann, Madison, Victoria.  That meant, it was over for Peter and Kelsey.

Upon saying goodbye to Kelsey, Peter said it meant so much to him when she told him she loves him.   But, he “wasn’t there.”  During her car ride, Kelsey said she was “shocked and confused.”

When Peter returned to the remaining women he said “I know my wife is in this hanger right now, and it makes it worth it.”  Just as Peter was walking away, Madison went after him.  It was implied that she might be ready to tell him that she’s a virgin.  To Be Continued….

NEXT WEEK:  Peter and the women are traveling to Australia. where their relationships will be tested further, this time in the Fantasy Suite dates.  BTW, Madison has yet to tell Peter about her virginity which it seems she’ll be getting to that next week.