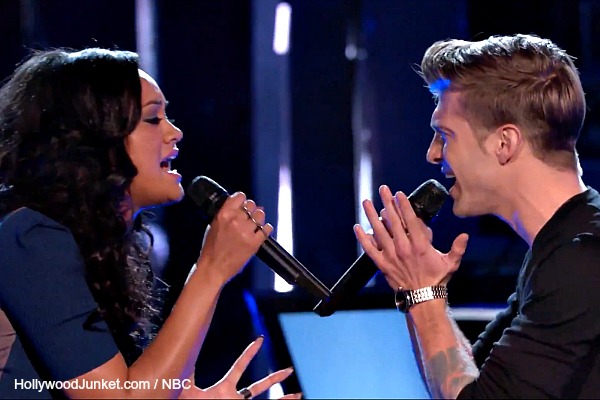 “The Voice” coaches Adam Levine, Shakira, and Usher have all used their steals to fill the remaining spots on their teams. Blake Shelton hold the only last spot left for a hopeful singer to be stolen and placed onto his team. Adviser Chris Martin is lending his talent and musical expertise to all the teams again in this Battles Round 2 episode. These Final Battles will be moving the artists into the play-offs, where they will be part of the Top 20.

Blake said he is saving his steal for “one of those artists I can see myself standing up in the winners’ circle at the end.”

Singing To The Guy In The Back Seat!
Clarissa Serna Vs. Dani Moz – TEAM SHAKIRA

“They are my powerhouse singers” said Shakira is why she picked them to battle. Shakria told them they have to be careful of the pocket. From the short list of songs, Dani and Clarissa chose Pink’s “Perfect.”

“My teacher used to tell me sing to whoever is in the back seat” Chris Martin advised them. Dani left a career in Public Relations to pursue her singing dream on “The Voice”. Clarissa said she will win the battle.

After their battle, Adam said, “there is major improvement on both sides. The beginning of the two for both or you- were really nervous and shaky. Suppressing the nerves and hiding it. We are always nervous, but making everyone not know that.”

Blake said, “Clarissa you have this poise on stage that I enjoy.”

Coach Shakira told them, “The one that I think can make the biggest difference…the winner of this battle is Dani.”

Battle Winner: Dani Moz
Steal: None
Shakira explains why she chose Dani, “if shes come this far in this round I cant wait to see what she is capable of.”

Adam told Kat she doesn’t need that extra attitude in her singing. He said because she has a powerful voice.

Dawn and Hawkes said, “If we lose this battle we go back to doing bar venues.” Kat who has stage experience as singing as a back-up singer, said she doesn’t want to go back to being a nanny, and “I’m not going out without a fight.”

Blake said, “I found myself watching Kat and she took the opportunity to make it her performance.” Usher had some words of advice, “the suggestions that I have for Dawn and Hawkes is to take command of the stage more. Kat, I felt like your spirit was there. My vote would lead in the direction of Kat.” Shakira told Dawn and Hawkes that they “sound like one”. She said to Kat, “Kat, on the other hand was engaging me from the beginning and you look like a star.”

Coach Adam said, “Dawn and Hawkes, you guys are great. Kat, you are one of the most underrated singers in this competition. If anyone could step-up to the challenge, I knew you could do that. The sad thing about me making this decision is I still haven’t seen any of you three entirely in your element.” He selected Kat as the winner.

Battle Winner: Kat Perkins
Steal: None
Adam said he kept Kat because she “has a really commanding presence..confidence, and drive – a dangerous cocktail.”
Kat said she won’t let Adam down. Blake said he’s saving his steal for something that takes him by surprise.

Music Box and Melissa picked “Only Girl (in The World)” by Alicia Keys.
Usher said during the Battles Round 2 is when the strong survive. While listening to the two women singing the song, Usher said, “I would want to hear Melissa’s version more.”

Singing “Only Girl (in The World)” by Alicia Keys.

Shakira reacted to their performance, “It’s a battle that had great moments and there were moments that weren’t that great.” Adam said he did a medley together with Alicia Keys. In this instance, you (Music Box) could feel that you wanted to do more. Melissa had more good moments.

Melissa is very smooth when she sings. But I’m still curious about Music Box. He picked Music Box.

Coach Usher said to the artists, “I asked you to make this song personal. You took it and made it your own. Because I am really looking forward to teaching you and developing you…” He picked Melissa

Usher said he chose Melissa because she “has a great deal of talent.” and they can get past her insecurities. She said she gave all of her heart on stage.

Usher said “Music Box has been introduced to the world and her son can be proud of her for going after her dreams.

“What does the Fox say?” Blake asked Usher because of the fur hat with tail he was wearing.

They chose Country song “Easy” by Rascal Flatts. Blake was thrilled that they chose a Country song. “With the song, they showed range and some depth. When you go to falsetto land, we are going to have one that gets away,” Blake told Kaleigh

“It was awful, I didn’t feel like you felt that it was that awful” Chris Martin told Ryan. Kaleigh said this is her time to do her own thing away from singing with her father. Ryan is a garbage man and said he wants to show his kids that they can be proud of him.

Usher said, “First of all I love ‘Easy.’ This song is difficult. Why did you chose that song?” Kaleigh answered with “This song portrays both of our vocals, and it’s a challenge and I love to take a challenge.” Usher told her he thinks that she has the voice, but was too safe and she pulled back.

Shakira chose Ryan as the winner because he “was a bit more effortless” in his performance. Adam stated, “The fact that you have a choice of song selection it shows us a lot. I’d stick with Ryan”

You guys are nothing alike. You both have strong raspy vocals. Kaleigh what I love is you think of places to go that no one else thinks of. He said Ryan performed a Tina Turner song… Blake said Ryan had overall consistency, so he chose Ryan.

Blake said “Ryan comes out with 150% confidence.” He said if Kaleigh can get to where she can control her nerves, she’ll be unstoppable.
Usher said Rascal Flatts is his type of country.

Adam said he paired them because “You’re my steals, I know really little about you guys.” This is the time for them to stake their place on my team he said.  Jake has a good voice but needs to be wrangled in and make it tasteful. They picked “Climax” by former coach Usher. Jake said his experience on “The Voice” doesn’t feel real where he has gone from singing in YouTube videos to where now he’s standing in front of Chris Martin and Adam Levine.

They were both on Team Usher, so, it’s ironic that they chose “Climax” song by Usher. Adam was excited to hear their song choice because it’s one of his favorites. He said the song ” it’s so sexy.”

“The key for them is to really inhabit that song. They have to make a leap to make it believable.” Said Chris Martin
Brittnee said she wants to win the battle because she doesn’t want to go back to her medical school. Jake is a bartender in New York and he wants to keep learning on “The Voice” and doesn’t want it to stop.

After their battle, Blake noted the shoes Jake was wearing which are a lot like Usher’s and yelled “Jake, that is a low blow to wear Usher’s shoes out here and sing his song! It’s really unique,” he said about what Jake did with his voice.

This judgement was not a fun one for Usher. He said, “I feel bad about analyzing the song because it’s my song and you are both from my team. It’s in the most difficult place to balance as a female. It’s probably unfair to give either of you the edge because you both have promising futures.” He pleaded the fifth!

Shakira said, “Jake with all those falsettos, you rose to the challenge. I would give it to Jake.

Coach Adam started with Brittnee “your voice cuts. There were song notes that were unbelievable and you stick out. Jake kind of blows me away because you sound like someone that’s been singing his whole life. I don’t know what it is but sometimes, someone possess a quality that makes you want to say I want to see more.” He chose Jake as the winner.

Battle Winner: Jake Barker
Finally, off-stage, Usher gave his opinion of what he really thought about the battle, “I think Adam has the chance to win this entire thing with Jake.” So, I guess he would have also chosen Jake!

Usher said to Madilyn “the tenderness of your voice vs. Bria – she possess a voice that just rings out.” They chose to sing “I’ll Stand By You.”
Usher and Chris Martin noticed the nervousness in the girls’ performance. Martin said he couldn’t do that at age 16 – Getting up on the stage like Madilyn. He told her to forget all those things “except one person” in order to control her nerves while on stage. Usher said Bria will have to show him that she has more than “one gear” which is loud. Martin commented on the girls contrasts – one is loud, and one is quite. Like a good Nirvana song, they could work well together.

Madilyn said there’s a lot of pressure on her being that young. Bria said she wants a future in music and her “tiny town” doesn’t offer that.

Singing “I’ll Stand By You”

The coaches were not blown-away by their battle. Adam pointed-out some flaws in their battle performance after they had finished, then said he was being “hyper critical” to try to make them feel better. But, what Blake said about their battle, took away any hope that they may have had for not being that bad.

Blake was also disappointed and reacted, “We know that we’ve seen the other side to what both and you can do. Not bad, but no one stood out.” Coach Usher said, “well, that wasn’t the greatest. Madilyn I felt like you gave it your all. You guys are so young and there’s so much to come in time. There’s no bad decision here. The winner of this battle round…I select Bria Kelly.”

Bria said she wasn’t expecting to win. Usher said he chose Bria because, “I invested in a long-term goal,” and he wants to show the world that she has versatility.

Blake decided to use his steal on Madilyn. He said, “I like her” then pushed his button to steal her. He said he chose to steal Madilyn because “the one thing that stood out is that her confidence gets better and better every time she gets on the stage.”