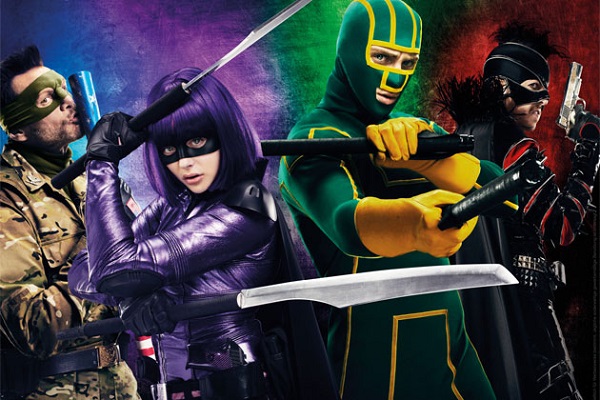 The last time we saw Kick-Ass he struggled to answer the question: “What is a superhero?” He teetered on wanting to be the good guy who does the right thing, but also not cross the line. Big Daddy and Hit Girl, on the other hand, had the masks, the money, and the martial arts. They killed people freely if it meant getting the job done. So, though Kick-Ass was technically the first real-life superhero, most viewers would consider Big Daddy and Hit Girl the real deal. Now, the sequel delves a little deeper and asks, “What does it mean to be a superhero in the real world? Are you a civilian disguised as a hero or a hero disguised as a civilian?”

In the sequel, Mindy or “Hit Girl” played by Chole Grace Moretz and Dave, a.k.a. “Kick-Ass” portrayed by Aaron Taylor-Johnson, practically swap places. Rather than Dave trying to get the girl and come into his own during high school, he’s out in the streets beating people with his batons. Then, Mindy, who was able to kill multiple men each night without giving a single thought, finds herself being bested by a new kind of evil: the mean girls of high school.

Kick-Ass 2 definitely packs a punch – both in humor and in battles. The flick follows a new group of superheroes, including a few of the originals, and their attempt to make the comic-book world a reality. Expect super villains and their evil lairs, homemade gadgets, a city in distress, and poignant family moments, a la Peter Parker and Uncle Ben.

But despite following these traditional patterns, these vigilantes turned superheroes have to discover that, unlike comic books, real world crime fighting comes with real world consequences. This time, it isn’t just evil drug lords getting maimed and killed, but some of the good guys as well, giving the movie a slightly darker tone.

While some sequels fail to live up to the original installment, Kick-Ass 2 holds it’s own and is really quite enjoyable giving it’s viewers a little bit of everything: some laugh out loud comedy, emotional dialogue, self-discovery, puppy love, and of course, some kick ass fighting scenes.

* Be sure to stay for a scene after the closing credits are done! Kick-Ass 2 opens in theaters on Friday, August 16, 2013.