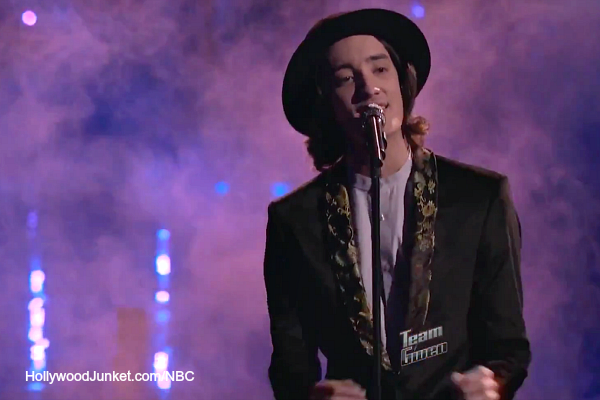 The Top 8 contestants opened “The Voice” show by performing together on the Voice stage. The first artist to perform of the night was Team Gwen member Ryan Sill.

Ryan Sill got the song “Open Arms” by Journey to perform. Gwen stressed how important the performance is. Gwen told him he is “dreamy and hopeful” and said “I want you to anti-perform.”

Coaches Comments: Adam said I’m shocked that Ryan has ever been in the bottom three” and said he “killed it” tonight. Blake said “I don’t know what else you can do to not be in that bottom three” and told him this performance is his best. Pharrell said each week he shows everyone how much he wants it and each week he does better. Gwen said she had tears in her eyes because she is so proud of him.

Craig Wayne Boyd got to number 6 on iTunes. He’s the last one left on Team Blake. Blake said Craig is doing the next phase in country music by singing “Take it Easy” by the Eagles – a “rock classic.” Blake told Craig not to get in his comfort zone and the show is his to lose.

Coaches Comments: Pharrell said a song from back then, sounds amazing tonight. “This is your show” he told Craig and said he will only evolve and get better. Gwen said she felt like she was at the Country Music Awards and he sounded so professional. Adam said “the world stood still for that (performance).” Coach Blake said “if I was going to have a last man standing, it would be Craig.” He said Craig set the bar so high last week by singing “Walk the Line” and felt like this was a good follow-up.

“She gets to do something ambitious on live television” said Pharrell and “something that stands-out” by having DaNica sing “These Dreams” by Heart. He said this is a different song now after she sang it.

Coaches Comments: Gwen said “You can do anything with your voice, like acrobatic.” She said the song actually “tames” her a bit, and said it was perfect timing for it. Adam said “it’s such an amazing song,” and said DaNica can sing the dictionary. But he was worried about her dress snagging on the staircase. Blake said she’s been one of his favorite’s since the beginning and has an enormous voice for being so little. Pharrell said she “faced it and believed in herself” He told her he was so proud and thankful for her being on his team.

NICK JONAS sang “Jealous” with the Top 8. Nick said his advice to the Top 8 is to “just enjoy the ride.”

“Someone Like You” by Adele is what Damien decided to sing. “I think Damien is the only one who should be singing Adele” said Adam. He also said about Damien, the way that you feel when you hear Damien sing is the same you feel when Adele sings – “they share an unbridled passion.”

Coaches Comments: He got a standing ovation from the coaches. Blake reacted “This is the best season that I’ve ever seen in my life.” Blake called him a machine if it wasn’t for all the passion he has because it was so perfect. Pharrell called him amazing and unbelievable. Gwen told him that it was so beautiful, and said the first “No Doubt” record she had got shelved. Coach Adam said “It’s boring the things that I have to say. You put so much faith and trust in me.” But this song was Damien’s choice and something that he’s been dreaming about performing on The Voice stage. Adam called it his best performance

Adam gave Chris “Sexual Healing” by Marvin Gaye to sing. Adam said there’s more than being super-hot. He said he realizes Chris’ true spirit – deeply sensitive. What it allows to do musically is “so in Chris’ zone.” Chris said he feels like this is the song that he’s been working for and wants to show America why he deserves to be in the competition.

Coaches Comments: “That was hands-down your best performance on this show” and lost his intention and “hit every note.” Pharrell told Chris “this is your zone.” Gwen said “what a thing to take on. It’s a lot” and said he didn’t look uncomfortable. Coach Adam said “you’re like Luke Skywalker….I’m a younger Obi-Wan Kenobi ” He told Chris he just crushed the entire audience.

Parrell gave Luke “Holding Back the Years” because, “It frames his voice really well. There’s an honesty in the lyric.”

Coaches Comments: Adam said it still seems like Luke is still thinking and wants to see “that fire” that he has. Blake said that in the song there was a lot of “sparse singing” not a lot of sink your teeth into and expects big moments from him. Coach Pharrell said even when he doesn’t let go, Luke is still better than a lot of the people that they encounter on the show and that they still have a lot of work.

They agreed that Taylor sing “Royals” by Lorde. Gwen said the song is very Taylor. Gwen told him to be “sassy in a guy way.” She brought out a choreographer to help his stage performance of the song. They told him to do moves that are weird like the lyrics in the song.

Coaches Comments: Blake said “no matter what you do on this stage, you always make every performance your own. You’re a 150% pure artist.” Pharrell told Taylor that he has an old soul…hippie.   Coach Gwen said she is so lucky that he chose her and credited Taylor for changing the song and changing the melody.

Coaches Comments: Blake said he’d never heard that song and the fact that he did that with just his guitar and a fiddle was “freaking brilliant”. Coach Adam said “Love is this crazy thing. It’s beautiful, blissful, and happy. It’s also brutal and painful – when you can embody that as an artist and show people that is the most valuable thing.” Adam said it is genuine and real and adores Matt.