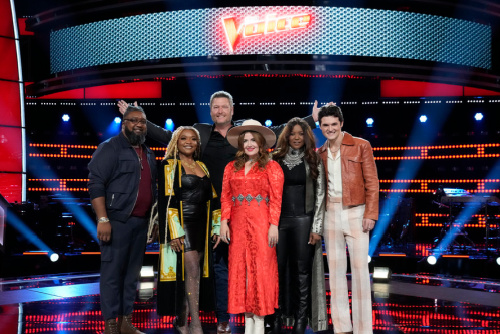 “The Voice” season 21 Knockouts went into it’s second week with one coach that had one Steal left.  That coach was Blake Shelton who used it at the very end of the Monday’s episode.  And with that,  all of the Teams once again are full and ready for the Live Shows next week!

This season the coaches – Kelly Clarkson, Blake Shelton, John Legend, and Ariana Grande are going into the Live Shows with five Team members each.  Where as in previous seasons, each Team brought four artists each and one Team winning an advantage in the Four-Way-Knockout giving that Team five instead of four.  The result was the Top 17.

This season fans are getting a Top 20.  This will soon become a Top 21 once  the “Comeback Vote” goes through where fans get to vote for their favorite eliminated artists, chosen by the coaches.   In the last night of Knockouts, artists really stepped-up thier games and took risks in the process to break through to a chance at going to the Lives.  These artists included Team Ariana’s Bella DeNapoli, Team Legend’s Shadale, and Paris Winningham.  Some of the risks from artists proved to not pay off.  That included Katherine Ann Molher’s rendition of “Posion,” Carson Peters adding his fiddle.  The show stopper of the night was Team Legend’s Jershika.

Samara chose “Simply the Best” by Tina Turner.  Sheeran said he loved how she performed and had “very minor notes.”  John said Tamara is a tiny person, but she sings big. Ed said “it’s not about being able to.  It’s about having the confidence that you’re able to.”   Shadale said the song she chose,”Impossible,” is about being in a situation that you’d neer thought you’d be in.  She thought about how she grew up moving around a lot and being homeless.  During the mentoring session, Ed and John sang backup to Shadale.  Ed told them that whatever happens, they’re both there because they are phenomenal.

Kelly told Shadale “that was really well done.”  She told Samara that she was missing that rasp that Tina is known for. But she has “an incredible gift.”  Kelly started crying while talking to Shadale and Shadale was crying as well.  Kelly praised her for keeping her composure while singing an emotional song.  Blake said Shadale went from “great to exceptional. There’s no denying we all felt it.”  Ariana todl Samara aht she’s the one that got away.  She told Shadal that it was so emotional and “it was really beautiful and really moving.”  John told Samara that he loved the “soul and the sexiness” she put on the song. He added that “it was a flawless performance.”  He told Shadale that he started thinking about Mary J. Blige and watching her because you really feel her emotion.  He told Shadale that she gave her best performance and what broke through was the emotion.

KNOCKOUT WINNER:  Shadale.  John said Shadale made every coach feel everything she was communicating.

Blake said one of the biggest arguments that he got into with Kelly was the difference between violins and fiddles.  Carson chose the song “Amarillo by Morning” by George Strait to play the fiddle and to show originality.  He said he and his dad have been touring and playing bluegrass around the Country.  Ed Sheeran said he wishes he grew up in the South because they didn’t have Country music in England.  He said he can see Carson becoming a great Country artist.  Blake said by him picking this song it shows how deep his roots run in Country music.  Lana chose the song “Wildest Dreams” by Taylor Swift.  She said the song feels the most like her on the show.  Ed told her that when hitting certain notes, he can’t hit them so hit them softly, or belt them. Blake advised that he always thinks he’s someone else on stage.  Blake said both artists occupy the same lane in Country music and he wants to give them the best opportunity going into the Lives. 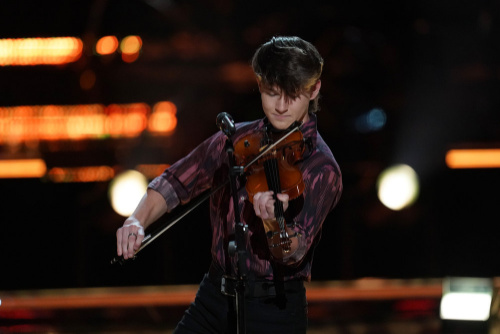 Ariana said to Carson that it was so beautiful and entertaining.  Lana has such a gorgeous Pop voice.  She picked Carson. John said there were moments where the notes needed more breath support.  He told Lana that those notes just cut through in a beautiful way.  He chose Lana.  Kelly said covering George Strait is a big deal and she said singing the song in his upper register was “weird” for her.  She told Lana that she has a piercing sound where her voice “cuts right through.”  Blake said with Lana, up until now she kind of flew under the radar.  He said to Carson, it’s a tall order to do a Geroge Strait song.  Blake said he’s picking the winner based on “what happened right now.”

KNOCKOUT WINNER:  Lana Scott.  Blake said Lana is an incredible vocal singer and she has an easier path to get there. 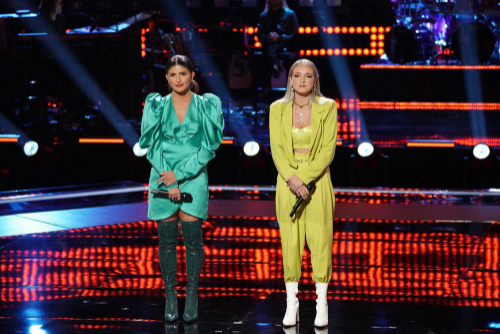 Bella chose “Chandelier” by Sia.  She said it made her think about when she almost gave up singing.  She made the arrangement on her own.  After a record deal fell through, she went into other careers.  Bella said “getting Saved” is the biggest thing she could have asked for.  Ariana said Bella has a special voice and is a great storyteller.  Ed told Bella that she’s “really selling the performance.”  “Poison” by  Bell Biv DeVoe.  She said it’s one of her Dad’s favorite songs. “It’s a risky performance for me.”  Ariana said with Katherine Ann, “you don’t know what to expect”  Ed loved that Katherine took the song and turned it on it’s head.

John said, on the “Poison” song to Katherine,  it’s a bold thing to do something so drastic from the original. “It was really daring and you can really sing.”  He said the arrangement didn’t work for him all the time.  He told Bella that it was a cool rendition of “Chandelier” and he went with her.  Kelly said Bella has an angelic thing with an edge.  She said Katherine did an atirice, cool move and made it cinematic.  Blake asked if “Poison” was a makeout song.  He didn’t get why it was a big song.  Blak noted that this was the most even Knockout because the approached the Knockout in the exact same way  He told Bella that her quiet pace is money  He went with Katherine because John was so hard on her.  Ariana said she loved how far this cometing has pushed Katherine.  Bella, it was a beautiful stunning performance.

They were shocked to see Ed Sheeran.  Jeremy told Ed that his mom is his biggest fan.  Jeremy chose the song “Run to You” by Whitney.  He said if you’re a dude, Whitney is either a great decision or a bad decision. He connects the song to his daughter who’s always running into his arms   Ed said Jeremy choosing Whitney was a genius choice and thinks he’s going to go far in the competition.  Ed said he could hear the nerves in Jeremy’s voice and just trust that he has it.  Xavier, who’s 17-years-old, chose “Falling Slowly” by Glen Hansard and Marketa Irglova.  He said he used to listen to the song on repeat and dream of performing it on a large stage.  Xavier said the song represents the artist that he wants to be.  Kelly said Xavier has an amazing range.  Ed’s only note was to make it sound more natural .  Kelly said she’s going to pick whoever doesn’t get nervous.

Blake told Jeremy that when he “ramped it up it was incredible.”  Xavier has a stand-out tone.  Ariana told Xavier that his performance was really stunning.  She told Jeremy that his performance was very moving.   She went with Jermey.  John told Jeremy that it was amazing and he delivered with such passion.  There was something about Xavier’s tone that it pulled him in.  He went with Xavier.  Kelly thought it was cool that Jeremy chose that song.  She loves that he chooses anything soulful.  She loves how in touch Xavier is with his emotions.

KNOCKOUT WINNER: Jeremy Rosado.  Kelly said Jeremy has such a solid voice and wears his heart on his sleeve.  She said moving forward, she can give him any genre and he’s down for trying it. 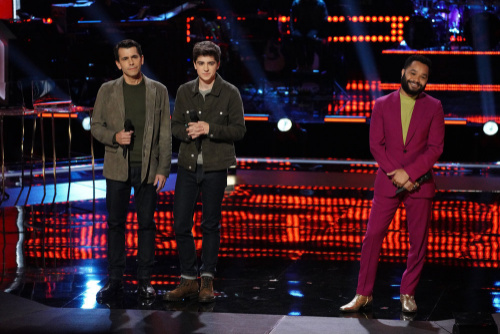 Ariana said she stole Manny from Blake.  Manny chose the song “Golden” by Harry  Styles. He said after losing his mom, he and his Dad’s bond has gotten stronger.  Ed said Manny has the tools to make it all the way through the competition.  Ed said Manny has the best stage presence out of anyone he’s seen.  Jim and Sasha Allen sang “Home” by Edward Sharp.  Sasha said the song makes him think about how they’ve gone on the journey from Connecticut to Los Angeles.  Ed said he loves seeing the relationship between father and son.  Sasha told Ed how much of an inspiration he was for him to write songs.  Aiana joked that she was offended and brought up her song “Side to Side.”

KNOCKOUT WINNER:  Jim & Sasha Allen. Ariana said what they do is so special and infectious.  Everyone is going to fall in love with them, she said.

John stole Jershika from Kelly.  Paris said he’s sung so many of Ed Sheeran’s songs  Jershika fanned-out over seeing Ed Sheeran.  “Inseparable” by Natalie Cole.  SHe said she’s going to be thinking about her mom when singing this song.  Jershika said her mom always pushed her.  John said listening to Jershika was a revelation because he heard things that he didn’t hear before.  Ed had no notes. He said she was his favorite.  He was in awe of her “mad runs” and he couldn’t do it.  John said it seems a little calculated instead of letting it flow.  Paris chose Country song “Tennessee Whiskey” by Chris Stapleton.  He said even though it’s a Country song, it has that soul to it and fits his voice like a glove.  The song is about self doubt.  He related the song to when he found out he was adopted.  Ed reacted that it was “insane.”  Ed said he’d buy an album of Paris’ work.

Kelly said John “is so capital ‘S” screwed right now.”  She said Paris just did such a great job and he took off his glasses. He’s so “sexy/cool.” She said she was so mad that she doesn’t have a Steal.  Blake joked that he too thought it was sexy.  It was Chris Stapleton and he brought a different kind of energy.  Blake said he doesn’t know how Kelly got rid of Jershika and she came out here and poured a little more salt in the wound.   Ariana said Jershika is able to make everyone in the room feel what she’s feeling.  Paris has a storytelling ability.  John said they all made this a dilemma because they were “A+” level performances.  He said Paris allowed his voice to be the star.  “It was beautiful.”   He said Jershika gave a master class in using all the different elements of her voice. 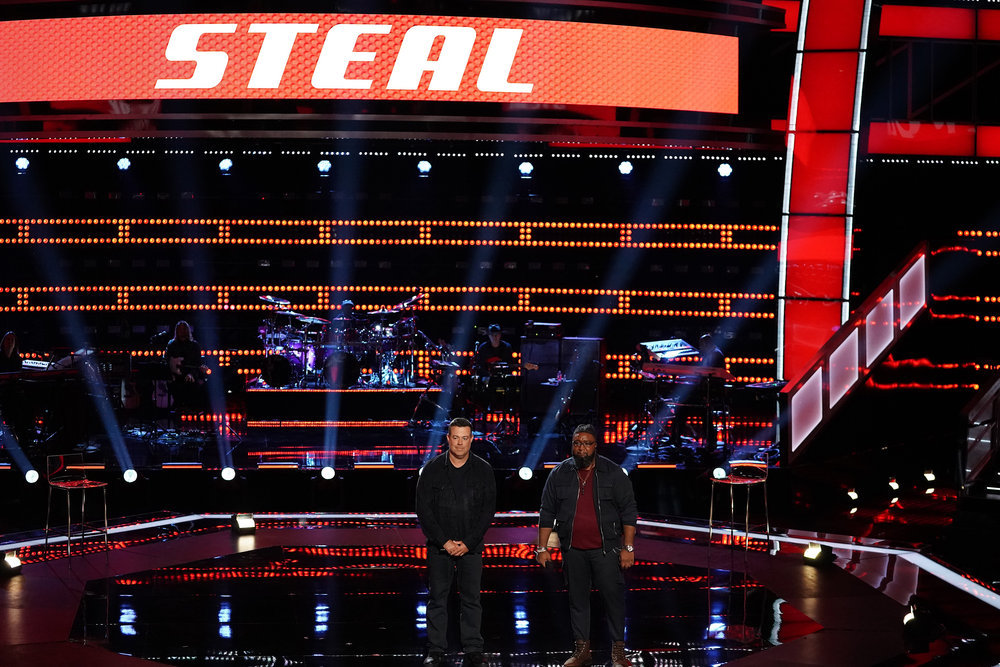 KNOCKOUT WINNER:  Jershika Maple.  John said Jershika and Paris was painful for him.  He can see Jershika making it all the way to the finale.

STEAL:  Blake pushed his Steal button for Paris!  Blake said it’s perfect that Paris ended-up on his Team.  “He sang a Country song for God’s sake.”