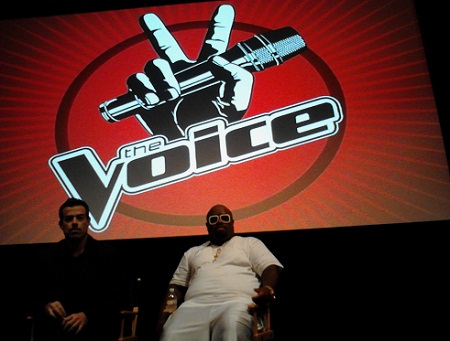 Being Brave on THE VOICE:
Cee Lo talks about competing on THE VOICE.
“When they come into the situation, they know they can seek solace in me. Of course, Blake is the only authority on Country music here on THE VOICE, so all the country artists go to him. But, I’ve had country artists on my team before. The reward is in the risk you take. I believe that everybody is so brave to come and share themselves and be selfish and be shameless even sometimes to live out loud, win lose or draw. We truly do coexist and I’m not saying that to be politically correct. We don’t compete.”

Cee Lo’s Christmas Special!
Cee Lo talks about backing his artists from THE VOICE- “Just recently we picked-up Juliet Simms. She’s on with my management now. So I have truly kept my word. I’m actually doing a Christmas special next week. I’m filming. I think 19 in total. All of my people are coming from Season 3 as we stand. I’m going right to season one getting Nakia, Niki, Jamar, Cheesa, Tony Vincent. (Carson Daly said Cee Lo is like George Foreman having to name all the children) We’re gong to come in and share that spotlight and success in the Christmas season. People should check it out. I’m doing my part to really endorse and continue and do my best to push them forward. It’s been working out pretty well I can say.”

Cee Lo Talks About Christina’s Chest and His Break from THE VOICE: