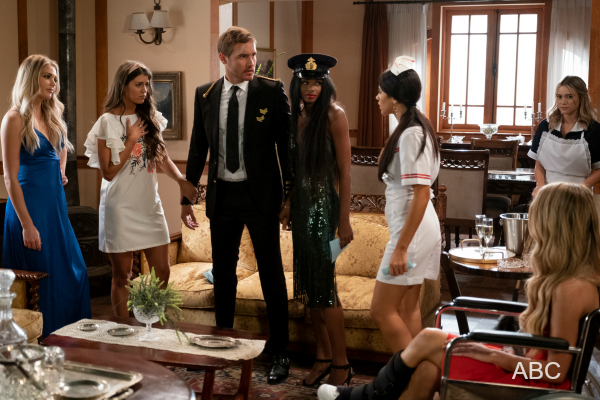 The beginning of this “The Bachelor” episode picked up on the women in Chile who were sitting around a table listening to MyKenna try to explain why she needed the alone time with Peter before the Rose Ceremony in Monday’s episode.  Peter had cancelled the Cocktail Party.  The other women were steamed, feeling like she made her own “mini cocktail party.”  Natasha and Victoria F. weren’t buying it and told her NOT to do it again.

Hannah Ann got the first date with Peter in Chile.  She told Peter that she’s never been in love.  Peter was set to find out why during dinner.   Hannah Ann told Peter that she doesn’t want to stay in “the shallow waters of life” and wants to “go deep.”  When Peter asked her about past relationships, Hannah Ann responded, ” I haven’t found that true love in my past.”  She said Peter’s qualities that he possess is what she was taught to want in a man.  Peter took a break outside after that.

Sensing that something was wrong, Hannah Ann checked-on Peter outside crying to tell him that it’s hard for her to be perfect.  Peter was glad to see the real Hannah Ann and gave her the date rose.  He said he feels that she’s ready and glad to have a break-through with her.

Back at the hotel: TWO, not one, group date cards arrived.  The first one had the names: Sydney, Natasha , Kelsey Vic P, Madison, Tammy, Kelley,  Mykenna.  The date card read: “Lights, camera, action.” – Peter.  The second date card was the second one-on-one date with Victoria F.’s name on it.  The card read: “I feel like we didn’t get a fair shot.” – Peter.  Of course, Mykenna was a mess after this, crying non-stop to Kelsey about it.

Peter took the girls on the group day to a set of a telenovela.  It was titled “El Amore De Pedro,” with Peter starring as “Pedro.” Peter said he has fond memories of his mother watching these types of soap operas when he was a kid.  The director cast each girl for a different part on the soap opera which seemed to somewhat match-up with real life.  Mykenna was cast as the maid who admires Pedro (played by Peter) from afar.  She said she could really relate to the character because she’s constantly going unnoticed by Peter.   Their two character came together at the end.  Mykenna was thrilled and hoped it would be true for her and Peter in real life as well.  The women brought out the passion and for Tammy, her fiery side which she plans to keep!

During the after party, Victoria P. pulled Peter outside for a chat to get back to where they started.  Peter was one hundred percent brutally honest with Victoria P. when he told her that he’s not sure if he can see her as his wife.  She took the hint and left the show. “This isn’t love,” said Victoria P.  She then called for a car to leave.

Peter said because it was “difficult on the first date” (when her ex-boyfriend Country star singer Chase Rice was there)  with Victoria F., is why he wanted another date with her.  Peter said he can definitely see her as a “Mrs. Weber” during their time with the locals.

Later that night, Peter told Victoria F. that it made him sad when she doubted their relationship.  She told him maybe he should get with a different girl.  Peter asked if she really wanted to be there and she said “yes” then left the table she was sitting at with him.  Behind-the-scenes, Victoria was talking to producers about how she doesn’t know what to do and it’s the most she’s liked any guy.

When Victoria returned to Peter at the table she said she knows that she likes him but he should be with someone who’s 100 % confident with him.  Peter said it was okay and he wanted to keep pursuing her.  He then gave her the date rose which she accepted.  She’s the fist girl that he fell for that hasn’t given him that validation back and that’s terrifying for him Peter said.

Back at the hotel: The girls were surprised to receive another date card.  It was a two-on-one with Tammy and Mykenna.  The card read: “Mykenna and Tammy meet me at the Cocktail Party before anyone else arrives.  Enough is enough.” – Peter.

Before Peter arrived, Mykenna and Tammy were seated together.  Mykenna told Tammy  that she helped her find her voice that other day when she yelled at her and she’s a strong woman.  “Bringing people down never wins,”  Mykenna told Tammy.

Peter took Tammy in private to find out what’s going on.  Tammy told Peter that Mykenna is trying to build her brand by being on the show and that Mykenna packed her bags ready to leave.  Peter asked where does she see a relationship with him.  She said Mykenna has disrupted “the process” and there’s been distractions.  But, truly believes that her and Peter are meant to be.

Mykenna told Peter that Tammy is all about taring people down.  Peter asked Mykenna about packing her bags. She said it was because she was having a hard time and thinking it wasn’t working-out with Peter.

Ultimately, Peter chose Mykenna based on that he “trusted” her over Tammy, then proceeded to walk Tammy out.  Tammy told Peter that she hoped he would make the right choice.

Peter grabbed Natasha first to spend time with during the cocktail party, followed by the other women.  Victoria F. finally had a break-through with Peter and told him that she’s ready to let him in and stop hiding behind her walls.  Peter was so happy to hear her say that.

Mykenna was crushed and didn’t understand why Peter just didn’t send both her and Tammy go home during the two-on-one date.

NEXT WEEK: The Bachelor’s next stop is Lima, Peru.  The remaining women – Kelsey, Madison, Victoria F., Kelley, Hannah Ann, Natasha get down to the nitty gritty when it comes to hatching-out emotions with Peter.