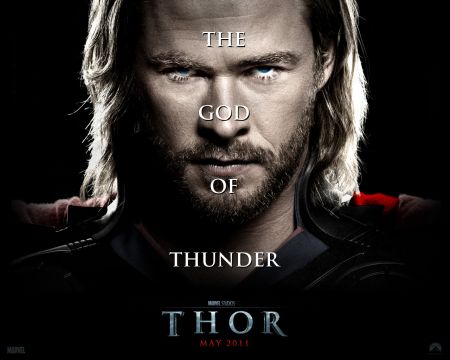 We caught a screening last night of the latest comic superhero movie by Marvel Comics about the “god of thunder”- THOR! 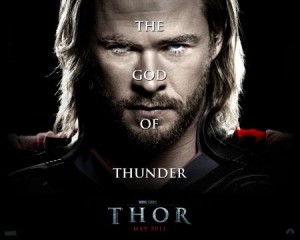 At first-glance it seems surprising that this comic book movie is directed by actor Kenneth Branagh. Best known for his Shakespeare work Henry V, Much Ado About Nothing, Othello, and Hamlet. However, he may have been the best one for the job. The film’s story revolves around a royal family suddenly facing a war that brings about strong family rivalry. All subject matters explored in Shakespeare’s plays.

The film is set in the realms of two worlds, Earth and Asgard. Earth is were astrophysicist Jane Foster (Natalie Portman) is introduced while she is tracking strange aerial phenomenon in the desert. Far away on the planet of Asgard existing in a different realm is where Thor (Chris Hemsworth) , a young prince is next in line to be crowned king and take over the throne from King Odin (Anthony Hopkins).

Standing-by is a jealous brother, Loki (Tom Hiddleston) whose harbored anger and resentment transpires into a seemingly irreversible string of events. Thor’s immature actions against his father Odin, result in his abandonment in a descend down to earth via a wormhole where Jane Foster crashes into him. They eventually form a bond due to their mutual understanding of quantum physics. Thor’s journey on earth teaches him compassion and how to hone his power which is harnessed through an iron hammer.

Viewed in IMAX 3D, THOR is a film which is visually stunning and effects are most appreciated during the scenes in the world of Asgard. The storyline is connected with the “Iron Man” films in showing the forming of “The Avengers” team with the integration of S.H.I.E.L.D agent. This is re-established in a bonus surprise scene after the ending credits with Nick Fury (Samuel L. Jackson)

Reminiscent of a young combination of Brad Pitt and Val Kilmer, Hemsworth is in the perfect position to take-off into Hollywood super-stardom. He is already off to shoot his reprising role as Thor in “The Avengers” film opening in 2012.

There is a fun cameo by Jeremy Renner who portrays Hawkeye. After the screening, there was a brief question and answer session conducted by L.A. Times Geoff Boucher (Hero Complex) with Kenneth Bragnah and Chris Hemsworth.

THOR opens in theaters this Friday, May 6. REMEMBER!– Stay after the credits for surprise scene!