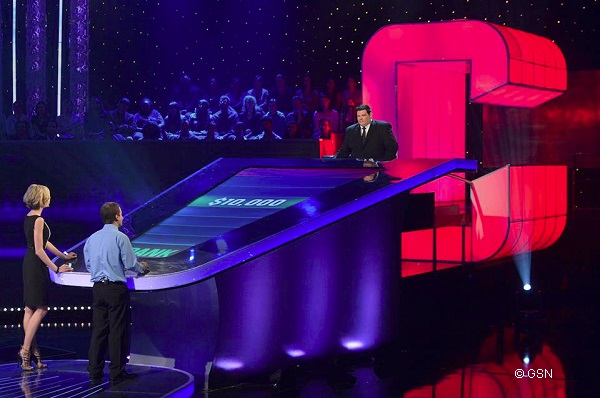 Popular U.K. game show called “The Chase” has been produced as an American game show by GSN and will air in August. During a set visit, we got to talk to the Chaser who will be battling contestants for their money, Mark Labbett, or “The Beast”.

How he got the nick-name “The Beast”?
It’s simple, the actual name “Labbett” Mark said, is an old French name for the beast or the werewolf, but the feminine version. When asked that they don’t call him that because he’s rude to contestants, he said, he’s only rude to contestants if they are rude to him.

What makes Labbett such a trivia genius?
He said, it’s a lot of years of playing trivia contests in Britain. He’s also a huge game show fan and he said that he’s been watching game shows since he can remember. But, after twenty years of playing trivia 3-4 times a week and on a national circuit, along with adopting the attitude of “I’ll play anyone anywhere anytime,” that’s what really garners his great trivia buff status and track record.

As a contestant on “Who Wants to Be a Millionaire”, Labbett won $32,000. But, said that typical game shows actually don’t want contestants at his level on their shows. Why? Because, according to Labbett, they like to produce fairly level teams. And, if a contestant is getting most of the questions correct during their audition, that’s when “they tend to go, ah, ‘no'” said Labbett.

The differences between the U.K. version and the U.S. version:
Labbett said, “The audience tends to be a lot more energetic which is really nice to feed off of. The contestants – they’ve come to play and throw down some trash talk. They’re much braver than the British contestants Only one in eight British contestants take the high offer. I wont’ say how many but there’s been more than that of the Americans going for the big money.”

Being the only Chaser:
Labbett is the only Chaser who was brought from the U.K. version of “The Chase” to the American one. That means, he must play against all three contestants on every episode. He said, “The pressure is, you know if you’re having a bad day, it’s a bad day. It’s self-inflicted. It’s the craftsman pride of wanting to do a job well. I’ve come off sometimes when I’ve won but played badly. Where other times I’ve lost, but I’ll go well-played. Part of being the best is proving you’re the best.”

Prepping for the American THE CHASE:
Labbett said, he did some home work. “I’ve been reading up on U.S. cabinets positions. Trying to work out some notable politicians because I’m going to get some more American based questions versus Britain.” Labbett’s career goal is, “to be able to go into every trivia bar and say ‘I’m Mark Labbett and I’ll take anyone on.’ Ultimately, he hates to play badly. But, it doesn’t make him upset if he loses while playing his best. He said, “As long as I’ve learned something. Then I go, okay, next time I won’t get that one wrong.”

Memorable contestants on the American THE CHASE:
Labbett gave us a sneak-peek at some of the contestants who will be competing on the American version of “The Chase.” He said, “A Navy veteran who was so hyped-up for it he was charging Brooke. Another guy, who was trying to win the money to propose to his girlfriend and I gave him the high offer to not just propose but, to get the whole wedding on it. He went for it. I won’t say what happened. There have been one or two who weren’t as good as they thought they were.”