Never Seen a Ventriloquist & Sax Player Like This on AMERICA’S GOT TALENT Season 17 Premiere Recap!

Widely known as a singing competition show that has produced so many music superstars, in true “American Idol” spirit, the focus of the finale show stayed on the talent and not the judges.  The Top 10 were welcomed back with numerous performances throughout the night.  Those included many superstar artists as well as the judges Katy Perry, Lionel Richie, and Luke Bryan.    It’s refreshing and uplifting to see these contestants celebrated for their wonderful talent and their perseverance to even make it this far on the show.

It was beautiful to see the first hour of “American Idol” season 20 finale was performances by the Top 3 who were Noah Thompson, Leah Marlene, and HunterGirl BEFORE bringing in all of the outside talent that included artists: Sara Bareilles, Ben Platt, Earth Wind, and Fire, Melissa Etheridge, Michael Buble, the Top 10, among many others.

At the end of the three hour finale, the winner was announced without much waiting time.  Before that, the first artist eliminated, Leah Marlene, was also the crowd’s favorite of the night.  The live studio audience kept chanting “Leah, Leah, Leah!”  Leah Marlene’s performance with Katy Perry opened with a clip of Leah from 2011 as a young girl covering “Firework” song with her Dad playing guitar beside her.  Then it faded to present day Leah on the “American Idol” stage also with Dad playing guitar by her side.  Then Katy came out! Epic! 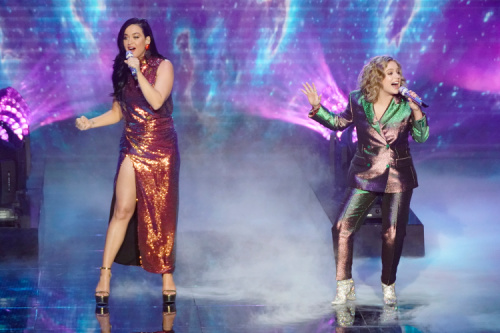 THE FULL RUN DOWN:

The show opened with a pre-taped performance of the Top 10 and Flo Rida performing on the roof of the Roosevelt Hotel in Hollywood, California.  “American Idol”‘ long time host Ryan Seacrest announced the stellar celebrity line-up performing in the finale.  However, unfortunately, Carrie Underwood was taken out of the line-up due to someone in her team having Covid.  Thus, she was quarantined. 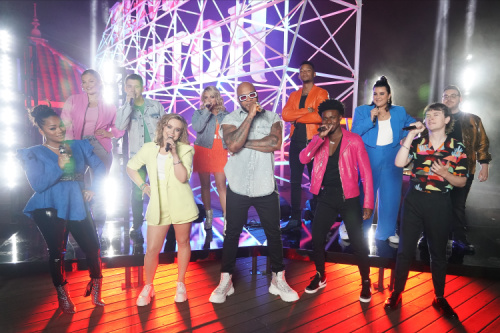 The first round of the show featured the Top 3 contestants honoring musical legend, icon Bruce Springsteen by covering his songs.

Leah Marlene sang “Cover Me” Lionel said this is a song that not everyone would know.  She turned it into her song, and the stage presence was there.  Katy told her that she is the “whole package”  She plays the guitar, writes her own music.  The amount of growth she’s done in such a small amount of time.  She won, period.  Luke said they walked by the American Idol reveal sign and he said he saw Leah Marlene laying on the floor meditating.  He told her to keep that part of her personality.

HunterGirl sang “Dancing in the Dark.”  Katy said she really brought that electricity and said I don’t think you’re a star  I think you’re a SuperNova. Katy said she took a page out of her wardrobe book, referring to the sparkles   Luke said he met a bunch of Huntergirl’s friends and “it was good being around your stomping grounds”  He added, “great song choice.”  Lionel joked that she was wearing his jacket.  “You now own the stage. You now own your career.  And you have a career.”

Noah Thompson sang Springsteen’s “I’m on Fire”  Luke told him congrats on being there and relishing the night.  Lionel stated that out of all the titles Noah Springsteen wasn’t one of them.  But, he looks and acts, and sounds like himself  “That is called an artist,”  and he graduated.  “Congratulations.”  Katy said Noah picked her favorite Springsteen song and he swooped and grabbed every heart of America.  “You’re just a good guy from Kentucky that might win American Idol.”

Seacrest asked the judges who out of the Top 3 is in the lead so far.   Luke joked that Katy has been hanging out in Kentucky a lot.  Luke said he loved Huntergirl’s song choice of “Dancing in the Dark.”  Katy pointed out that they have two artists in the Country genre.  Then Luke said “they split votes. I don’t know.”  Lionel chimed-in, “but, song choice is everything and familiarity is important because you want the audience singing along. He loved “Dancing in the Dark” and thought Noah did a great job.

Leah’s town of Normal announced May 17th as Leah Day.  She was welcomed to a sea of thousands of people welcoming her back home as she performed on stage.

LEAH MARLENE was back on the “American Idol” stage to sing one of her original songs called “Flower.”  After her performance, the crowd was shouting “Leah, Leah, Leah…”  Lionel told her the crowd “doesn’t lie.”  Lionel congratulated her.  Katy reacted with a scream as her earrings fell out.  “I’m blessed to be here, a part of the show that is hugely making a difference.”   She called Leah a “brilliant messenger” and her life has begun.  Luke said “what a ride you must be on.”  Leah was crying and said she is so overwhelmed and never thought she’d be able to get out of that situation (in her song) and now she’s on the A.I. stage.

NOAH THOMPSON went back to his hometown.  Ricky Skaggs, and Chris Stapleton have also come out of Noah’s small town.  Noah visited the construction crew that he normally works with.  He said being away from his son Walker is the hardest part of being away and on “American Idol.”  The town named a city street after him.   The city also made a sign “Lawrence County” home of American Idol star Noah Thompson.

Noah’s single “One Day Tonight” had already hit the top of the charts by the time he performed it on the idol stage.  Katy told Noah, “God has a real sense of humor.  you came from working on the arc to a place where all of your heroes are from.”  She told him to not stop dreaming and there’s a plan for his life.  Luke said all of the Top 3 have grown so much.  He’s never seen that much growth from any Top 3 on the show.   Lionel told Noah that what they strive for is a hit record.  But what makes your career last forever is for people to love you.  “You’re onto something fabulous” and it’s the greatest love of all along with his son’s love.

HUNTERGIRL went back to Tennessee.  Huntergirl said being from such a small town it’s hard to dream because it seems so far out of reach  HunterGirl teared up while talking about her visit.  In the studio, Luke and Katy were both tearing-up over HunterGirl’s package.

HunterGirl sang her original single “Red Bird.” Luke said he named their farm “Red Bird Farm” for that reason, and said “more tissue please.” He said that’s how you write a song, you take an experience and turn it into a song.  Lionel said they’ve always been impressed by her talent.  He said those veterans that she works with tell the truth about her.  “Your heart is in the right place.  May you thrive as much as possible.”  Then, HunterGirl started crying. Katy said this is not a karaoke competition and all three of the Top 3 are doing something special.  She said music is a type of therapy and they help so many people. 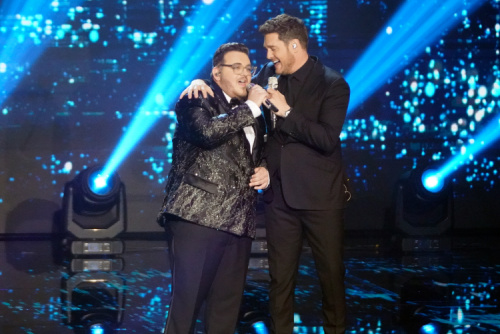 Then it was time for the first result of the night.  That meant, one artist would be revealed as coming in third place.  The first artist moving on was Noah Thompson.  The next artist announced as competing for the title was HunterGirl, who was in shock.   Leah Marlene was the third place singer.  The crowd chanted “Leah, Leah, Leah!”

“American Idol” season 14 third place runner-up Gabby Barrett returned to perform her single “Pick Me Up.”  Immediately after that performance, Top 10 artist Emyrson Flora emerged onto the stage to perform “The Good Ones” with Barrett.  Seacrest confirmed Barrett’s exciting news.  Barrett said it will be “really fun” opening for Jason Aldean this summer.

They chose some of the stand-out duets on TikTok with the Top 10 to feature on the finale show.   Next, Top 5 artist Nicolina performed the song she auditioned with “She Used to be My” by the song’s artist Sara Bareilles.

A fun segment of the show was when the Top 3 imitated each other with their most notable traits.  It was Noah’s hair and catchphrase “that’s tough” that they copied.  HunterGirl’s cowboy boots and fringe; and Leah’s infectious signature laugh.

After that, Top 5 Fritz Hager gave a stunning performance with James Arthur.   Another great and much awaited performance was Michael Buble and Top 5 Christian Gaurdino singing “Smile.”  Buble was there to promote his new album called “Higher.”  Noah Thompson performed “I’m the Only One” with Melissa Etheridge.   HunterGirl performed “I Told You So” by Randy Travis with Luke Bryan.

Lionel Richie performed with the Top 10 “You Are.”   The Top 2,  HunterGirl and Noah Thompson came out onto the stage to react to being the Top 2.  Noah said he wasn’t even expecting a ticket to even make it to Hollywood.  Seacrest announced a gift for them from the show.  They were each given a Disney cruise from themselves and three guests.

Noah Thompson, sporting a suit, repeated his performance of Rihanna’s “Stay” song, and it was one of his best performances!   The audience couldn’t stop screaming.  Lionel said “that’s it!”  Katy joked “wear that suit and sing that song!”  She said his growth and he “hit some notes!”  Luke said when he performed that song earlier in the season they knew he had something special.

Flashback to HunterGirl’s “American Idol” audition when Luke Bryan wrote “Top 10” in his notes and she got the Platinum Ticket.  HunterGirl performed the same song she auditioned with, “Riot.”  Katy said she believes in her so much and the growth is phenomenal  Luke said the smile on his face at her audition, says it all.  He could see her future then, and now here she is.  Lionel said it’s apparent to all of them that her “star is shinning so bright.”  He told her that they are so proud of her.

HunterGirl said she’s grown more in her time there than her entire life.  Noah said he’s going to take everything in and continue to apply it for the rest of his life.

Seacrest announced that NOAH THOMPSON is the winner of season 20!  Noah said his heart was beating out of his chest and it’s crazy.  Noah closed the show by performing his single “One Day Tonight.”