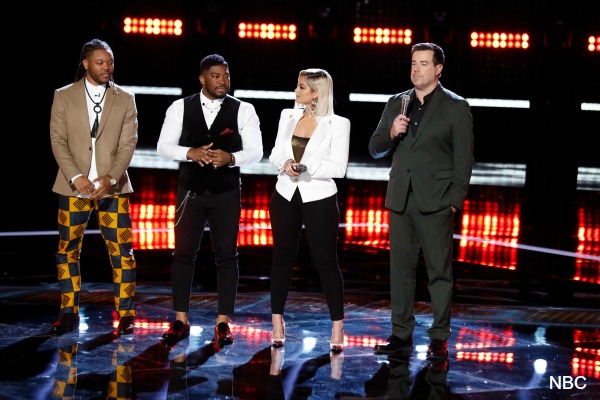 Team Blake was going strong with eight artists, Kelly and John each had six, and Adam was left with four artists on his Team. Monday’s show featured epic back-to-back performances without coach critiques afterwards. This hopefully ensured for unswayed votes from America who chose the Top 13 artists of season 16 revealed in Tuesday’s Results show.

Tuesday’s Results show had the biggest elimination of the season where only half of the artists moved-on to the Live Shows. Plus, the winner of the Comeback Stage faced-off against an eliminated artist in the Cross Battles to rejoin “The Voice” competition.

At the top of Monday’s show, host Carson Daly asked each coach to talk about their Teams. Kelly Clarkson said people start to emulate other people, “Just be yourself.  I really want them to be themselves.  That’s what I’m hoping for.” She said she has Country, Rock, Pop on her Team which runs the gambit.

Host Carson Daly announced that part of the votes will include the streaming downloads which will be multiplied by five.

TEAM LEGEND:
John Legend said his Team is “very stong” and should make the other coaches concerned.  First to perform was Lisa Ramey who sang a groovey version of  “The Weight (Take a Load off Annie/Fanny)” song by The Band.   Alternative artist that John saved during the Cross Battles was Jacob Maxwell who transported us back to the 80s with “Total Eclipse of the Heart” song by Bonnie Tyler.  Jimmy Mowery gave his best effort singing “Young Blood.”  Ceclia Babini sang classic “The Chain” by Fleetwood Mac.  Next was Maelynn Jarmon.  Closing-out Team Legend was Houston R&B singer Shawn Sounds who sang “Higher Ground” song by Stevie Wonder.

TEAM ADAM: Adam Levine said all of his Team is “amazing” and it’s going to be great performances.  Kalvin Jarvis performed first and truly was amazing.   Next Betsy Ade rocked-out to “Are You Gonna Be My Girl” by Jet. Mari sang “Work it Out” by Beyonce.  Soul singer Domenic Haynes sang a slow, soulful “Love is a Losing Game” song.

TEAM BLAKE: Blake Shelton said what he’s looking for is a continuation of the Cross Battles. He said his Team leaves it all out on the stage.  Blake teased, “as a coach, I do the complete opposite of Adam and look where it’s got me.”   Blake Stole Oliv in the Cross Battles, and got Kendra back on his Team, away from Adam.  Blake said Carter gets better every round, and Gyth is going to be in the finale.  First up was Andrew Sevener who sang “Boots On.”

South African singer-songwriter that Blake saved was Selkii who sang “I Just Want You To Know Who I Am” by Iris.  Unique soul singer, Oliv Blu took the stage next with a tuneful, upbeat “The Girl From Ipanema” song.  Then Gyth Rigdon sang “I Want to Be Loved Like That” Country song.   San Diego pop singer that Blake stole, Kendra Checketts gave a wonderful performance of “Bad Guy” by Billie Eilish. Then, 19-year-old singer from Georgia Carter Lloyd Horne paid tribute to the King with “Heartbreak Hotel” and did Elvis justice!  Kim Cherry brought it to the stage with epic classic song “Waterfalls” by TLC while playing keyboard with a softer tone.  Closing-out the night was Dexter Roberts who looked and sounded like a Country star singing “Ain’t Nothing ‘Bout You” song by Team Blake’s advisers this season Brooks & Dunn.

Host Carson Daly reminded viewers that Tuesday’s Results show was the “biggest eliminaton of the seaosn,” and will dramatically determine the fate of the Teams.

Coaches were be able to Save only one artist on their Teams. Also on Tuesday night, Comeback Stage fourth coach Bebe Rexha revealed the artist brought back from the Comeback Stage to compete for a spot in the Top 13.

Blake stated that the advice he gave his artists is “if you go home tonight, you can’t let this discourage you.  It’s so early in the game for them…in life in persuing this dream” and he stressed look how far they’ve already gone.

Daly announced that past ‘Voice artist Koryn Hawthorne is nominated for a Billboard award Wednesday night where Kelly Clarkson will be hosting.  Kelly said she feels great.  It’s a show, so someone has to be the last man standing.  Kelly reminded everyone that she still had to work to be where she is, before and after American Idol. It didn’t happen overnight.

John Legend said Celia elevated the game last night and it was a revelation watching her last night.  Adam commented on the Save process, “it’s a momentary decision” and he stated that he doesn’t want to “overthink it.  I love them all,”  he finished that it will be “brutal.”

Just before bringing the Top 24 artists out onto the stage, Daly announced that Gyth Rigdon was the most streamed artist on Monday night.  Daly then revealed that America saved Gyth Rigdon (Team Blake).  The second artist saved was Shawn Sounds (Team Legend).  Next, Carter Lloyd Horne (Team Blake) was also Saved.

Next Monday, the artists will sing fan favorite songs.  Betsy Ade, Kalvin, Domenic, and Mari performed “Is This Love” by Bob Marley with thier coach Adam Levine.

COMEBACK STAGE: Bebe Rexha came out to “The Voice” stage and said she loves working with the artists and giving them a second chance.  Her chosen artist went against an eliminated artist from the Cross Battles.  Kanard Thomas got accepted to the Comeback Stage after not getting a chair turn in the Blind Auditions.  He made it through all four rounds in the Comeback Stage for a shot a the Live Shows.  Eliminated artist from the Cross Battles, LB Crew got to go against Conard to compete for a spot on the Lives.

Similar to the Instant Save, voters had five minutes to Tweet to save their favorite artists.  Kanard Thomas sang “Call Out My Name.”

John Legend reacted that he showed so much skill and loved how he switched between his tones, “it sounded really gorgeous.”  Next, LB sang “Electic Feel” by MGMT.  Former coach Adam Levine said “LB that was literally a perfect 10…a perfect 10” and thought it was the best performance of the season.

LB said he’s been living a dream and making Top 13 would be everything. Bebe told them that they are both incredible.  “No matter what happens, you have to just keep going,” she told them. The artist who won the Twitter vote was – LB Crew who joined the Top 13!  To make it official, he had to pick a coach.  He told John that he loves him,  but he sees his Team low in numbers, so LB went back to Team Adam. After that, the remaining 16 artists came out onto the stage to find out which four would be Saved by their coaches.

Blake said all three girls remaining (Oliv, Kendra, Selkii) on his Team worked hard.  He decided to Save Oliv Blu.  Kelly was next.  She stated, “I have no idea that this was going to happen,” and apologized in advance for picking one Team member.  Kelly selected Jej Vinson to move on the Top 13.  She said he does his homework every time and comes back stronger.

John Legend said “I was so excited to be a coach on The Voice. I thought it was going to be all fun and games. Then we come to this point.”  He said his choice was Celia Babini which was part of his Top 3 performances for last night.