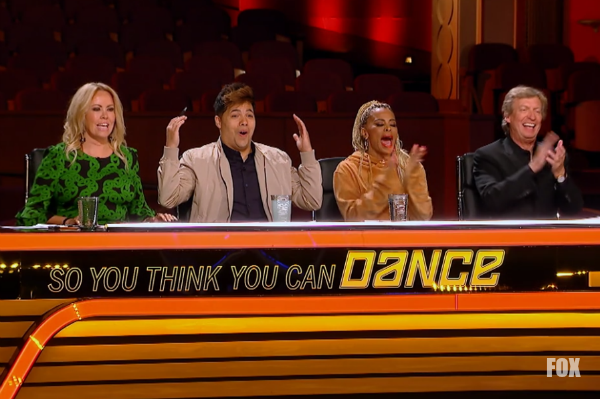 After the Top 20 survived “So You Think You Can Dance” season 16 Academy week, they had to face their final challenge, making it through to the Top 10 selects. Each girl dancer was paired with an All-Star and a legendary choreographer. They had to dance a style outside of their own. At the end, five girls remained to go through to the Live Shows.

First-up was Mariah Russell who said the “biggest” thing that she learned at the Academy was Ballroom, and nailed it BTW!! She had to dance Salsa with All-Star Jonathan Platero where his wife, Oksana Platero, choreographed. Jonathan commented that this style is new to Mariah, but as long as she can sell it, America is going to all in love with her. Mariah stated that she wanted to show the judges that she’s willing to do what it takes to make the Top 10. Mary reacted that the lifts in her routine were “so stunning” and had some authentic moves. Dtrix said that’s difficult for pro Salsa dancers, and it was “fearless.” Laurieann reacted that it’s the “fire and fight” she’s looking for, and Nigel told her “good job.”

Next up was Melany Mercedes who’s a Salsa dancer. She got Hip Hop with All-Star and season 10 winner Fik-Shun. Her choreographers were Randi & Hef. Dtrix advised Melany to “get more grounded with the movements.” Laurieann stated that she was missing her presence and facial expressions. Nigel agreed and pointed-out that Fik-Shun had that.

Ballroom dancer Ashley Sanchez got Contemporary choreographed by Jaci Royal. Ashley was challenged because she’s never danced a routine using that much emotion. Her All-Star was Lex Ishimoto, season 14 winner. Nigel told Ashley that it wasn’t enough emotion and she gave him “a whisper.” Dtrix and Mary agreed. Dtrix said it was a “missed opportunity” for her. She did all the moves but without the emotional attachment which could have sent her to the Top 5. Laurieann said Ashley had a “break-through” and a freedom which is the first-step in becoming what the judges are asking for.

Hip Hop dancer Anna Linstruth got Jazz choreographed by Ray Leeper with All-Star Marko Germar. Anna said she was challenged in her stamina with this routine. Mary reacted “what a time to NAIL it!” Dtrix said a smart dancer is to take something they’re not used to and make it their own which is what she did. Nigel agreed and called her a “star” to Laurieann after she left the stage.

Contemporary dancer Madison Jordan was next who danced the Cha Cha with All-Star Kiki Nyemchek choreographed by Sasha Farber & Emma Slater. She said Kiki makes it easy to dance in a style she’s not familiar with. Nigel said she had it all – sass, power, femininity and she was strong. Mary said Madison was present every second of the routine. Dtrix said Madison knocked it out of the park. Laurieann said the “razzamatazz” is back and to hang on to it.

Sofia Ghavami who’s a Ballroom dancer was next. She auditioned with Kiki Nyemchek as her partner. She did a Jazz routine choreographed by Spencer Liff. Her All-Star was Marko who she lost out on being on his team in season 14 to Koine. Mary told Sofia that her movement was great. Dtrix said the routine was “flat” for him and not blown-away but the execution was good. Laurieann said the routine showed her how capable Sofia is. Nigel said he’d like to see more attitude.

Hip Hip dancer Sumi Oshima got another shot at Contemporary, choreographed by Talla Favia. Her All-Star was Lex Ishimoto. Laurieann reacted that it was so unexpected and she fought to be noticed, but advised her to not dance in her head. Nigel said the emotion was taken out and it became just a number of steps. Mary said there is something about Sumi that commands attention on the dance floor and it was an interesting piece.

Nazz Sldryan is a Ballroom dancer got Hip Hop with choreographer Luther Brown and All-Star Fik-Shun. He said Nazz is “killing it.” Laurieann said when the right girl gets it, it gives them the power to be confident, sexy and sassy and it was “awesome.” Nigel loved it and said she proved him right because he’s been fighting for her. Mary said Luther definitely “put some soul in the bowl” with her because she starred in that routine with season 10 winner, All-Star Fik-Shun.

There were two dancers left, Sophie Pittman (Contemporary) and Stephanie Sosa (Ballroom). Sophie was given Cha Cha which she said was the toughest style for her at the Academy and she didn’t connect with her partner there. This time, her partner is All-Star Kiki, choreographed by Sharna Burgess. Kiki advised Sophie to portray confidence. Sharna said Sophie needs to “work in the connection department.” Nigel’s reaction was that he could tell Sophie wasn’t comfortable dancing in heels. He said it wasn’t as strong as he’s seen her so far. Mary said she needs more from Sophie and could see her thinking during the routine. Dtrix said it wasn’t the best performance and she needs to connect with the judges. Laurieann told her to apply the notes and don’t forget the magic that she brings.

The final dancer was Stephanie Sosa who made it all the way through the Academy until right before the Top 10. Stephanie got Contemporary choreographed by Mandy Moore who said her challenge is “not claming-up.” Her All-Star Robert Roldan said Stephanie needs to be “raw and vulnerable” in the routine. Dtrix said the most powerful moment was when Robert pushed her forward and overall great performance. Laurieann said she danced it well but need to surrender to the vulnerability. Nigel commented that one of the landings, but has been stunning all the way through the competition. Mary said Stephanie can open it more, but she’s still a star.

The Top 10 girls had to wait for the judges final decision where only five of them would continue on. All ten girls were called-out to the stage. Nigel said he can’t think of a more vulnerable dance show where they’re asked to dance styles that they’re not comfortable with. The first girl to make it through was Mariah Russell. Next, Melany was called. However, she did not make it, “so close” Laurieann stated but “not close enough.” Stephanie was told by Mary she made it to the Top 5. Ashley was next and sent home. Then, Anna was told by Dtrix that she has a spot in the top 5 and he hopes her progression continues. With Sofia, Laurieann said it’s been a debate between the judges, but she’s not going to the Top 5. Sumi was next and Dtrix broke the bad news that her standards with the styles outside of Hip Hop weren’t there and she went home. Sophie was told by Laurieann that her last routine had the judges fighting and ultimately she’s in the Top 5.

The last two girls remaining were Nazz and Madison. Nigel said Nazz really brought it in the last dance, but should have done that all along. The judges had to look at their entire week at the Academy. He said to Madison that at times, she needs to give them light and shade, but she’s inspirational which is why she’s in the Top 5.

NEXT WEEK: It’s the guys turn to fight for their spots in the Top 10. They’ll also be paired with All-Stars and world renowned choreographers. After next week, viewers will have their Top 10 dancers that will be competing each week in the Live Shows.

“So You Think You Can Dance” airs Mondays at 9 pm PT on FOX.