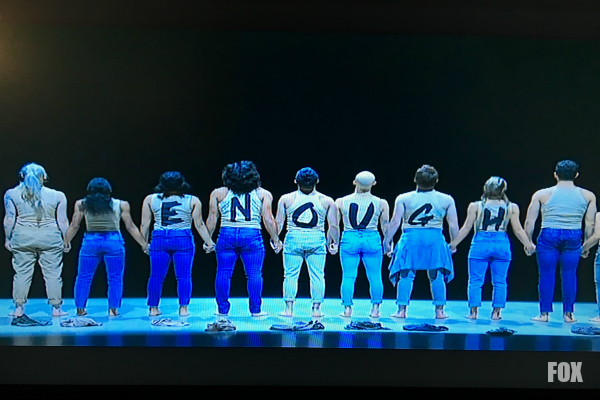 The second week of FOX’s “So You Think You Can Dance” (SYTYCD) had the Top 10 dancers perform with the same partners they had last week, and they each told their stories of the first time they danced on stage.

Host Cat Deeley announced at the end of each pairings performance their results from America’s votes of who was “safe” and who was “in danger” of going home, giving viewers the “bottom four.”

The votes were based off the Top 10’s routines last week. At the end of the episode, the judges voted for two dancers – one boy, and one girl to continue on in the competition. The remaining two sadly went home, giving us our Top 8 dancers this season.

After the show opened with a Travis Wall number from the Top 10 in their last performance of the season together. The first pairing of the night was Stephanie and Gino.

Stephanie said her very first performance as a child was a traditional Mexican dance. In her routine with Gino, the story line was that she comes to a gas station and Gino fills up her tank. Gino wowed by nailing all the moves to this routine while interjecting some personality. Judges Comments: Judge Mary Murphy said Gino was “hitting us with greatness,” and he wasn’t the “caboose” this week, but the “conductor.” Dominic (Dtrix) stated Stephanie was “equally amazing” and Gino lifted-up to what she does. He was “a star!” Laurieann said she “smells greatness.” Nigel compared Gino to SYTYCD season 2 winner Benji Schwimmer. Gino told Cat Deeley that he has nothing to lose.

RESULTS: Gino was safe. Stephanie was in danger.

Eddie and Sophie got a Contemporary routine choreographed by Travis Wall. Sophie, who is a contemporary dancer, stated that she can’t wait to show America who she it through her dance style. The routine’s story line was Sophie was playing a party girl, and Eddie comes to save her. Judges Comments: Dtrix called it a “brilliant” routine from Travis Wall and he thought the technique and emotion was there. “Better than last week” he said. Laurieann said to Sophie, she is a great story-teller, and what is a true great artist is made of. She told Eddie he “rocked it,” and “don’t fake the emotion.” He’s good enough to be “real.” Nigel said Sophie has a strong partner in Eddie. He told Travis that this routine along with the opening number, he is one of the greatest choreographers of SYTYCD. Mary said Sophie is “liquid gold.” She told Eddie that is what life is all about. “Picking yourself back up…you are living it tonight,” she added.

RESULTS: Eddie was in danger, and Sophie was safe.

Anna and Benjamin got Hip Hop choreographed by Randi & Hef. The routine’s concept was about a couple that just won the lottery. Judges Comments: Laurieann called it “amazing” and said Benjamin’s calling is to dance. She added that the cornrows hair style he wore looked good on him! Laurieann didn’t have kind words for Anna, stating that she “missed” her tonight. Laurieann was open about being disappointed by her Hip Hop, and she noticed Benjamin more than Anna in the routine. Because all of the glitter and rhinestones on Anna’s and Benjamin’s outfits, Nigel had sunglasses on and they “sparkle.” Mary loved it and their body rolls moves. Dtrix stated that they had great chemistry and commitment.

RESULTS: Benjamin was safe. Anna was in danger.

Ezra said in his first on-stage performance was ballroom and he was able to release his “inner animal.” Madison’s first dance was in fact a jazz routine, and that’s the same style the duo got this week with choreographer Ray Leeper. Leeper stated that the routine is sexy and requires a lot of chemistry. Judges Comments: Nigel said they “out-did themselves” and the chemistry was certainly there and Bob Fosse would have LOVED Madison. He said there’s something fabulous about Ezra’s pirouette. The pair of them was “magnificent” Nigel stated. Mary said the song they danced to is one of the sexiest songs in history. They lived up to it. She added that Ezra has become a leading man. Dtrix called-out his favorite moment in the routine was when Madison grabbed Ezra in the chair. He said “very, very sexy…an amazing moment!” Laurieann stated “that was dancing…Amazing!!”

RESULTS: Ezra was in danger. Madison was safe.

Bailey said his first performance was in fifth grade in the cafeteria. Mariah’s first performance was in a dance competition. Mariah and Bailey got Hip Hop choreographed by Luther Brown. He said their routine is “Motorcross sauce.” Luther commented in rehearsals that Mariah’s pocket is ridiculous. Bailey said Mariah will bring the hot sauce their routine and he’ll bring the soy sauce! He said hopefully they’ll have sauce “dripping every where.” That, they did! After their stellar performance, the duo got a standing ovation from the judges.

Judges Comments: Mary said how much in the pocket can they be?! It was her favorite number of the night and they’re the couple to beat. Dtrix stated they brought the sauce and then some. He couldn’t believe that Mariah ISN’T Hip Hop! Laurieann commented that the community of Hip Hop is so proud of them. She also added that is how they sit in the pocket and “don’t make other choices than believing in greatness you were born to give.” Nigel said “the routine was dirty.” He agreed that they are the couple to beat tonight. Nigel added that there’s not a lot he can say about Mariah that won’t get him in trouble – referring to her sexual moves towards the end complete with twerking and the splits.

Cat Deeley didn’t need to reveal the results because it was a given they both Bailey and Mariah were safe.

BOTTOM FOUR: The bottom four dancers consisted of Eddie Hoyt, Anna Linstruth, and brother and sister Stephanie Sosa and Ezra Sosa. The judges deliberated during the commercial break. Then the dancers waited on stage to find out their fates. Nigel told them that the judges take into account how they danced tonight (not just from last week’s performances). He said SYTYCD is about the growth in dancers and they don’t get enough time to get to know them. He announced Ezra Sosa as the “young man” they decided to save.

Nigel said for the second dancer voted through, it was a three-to-one vote in favor of Anna Linstruth. That meant Eddie was eliminated, along with Ezra’s sister Stephanie Sosa. When Cat Deeley consoled the dancers on stage, Ezra said he and Stephanie wear matching necklaces in the event that they get separated such as this incident. The siblings were distraught. Stephanie had a final message to all the girls out there who think they aren’t pretty enough, skinny enough. “You can do anything.”

NEXT WEEK: One more guy and one more girl will leave the SYTYCD competition in a two-hour show. Make sure to vote!