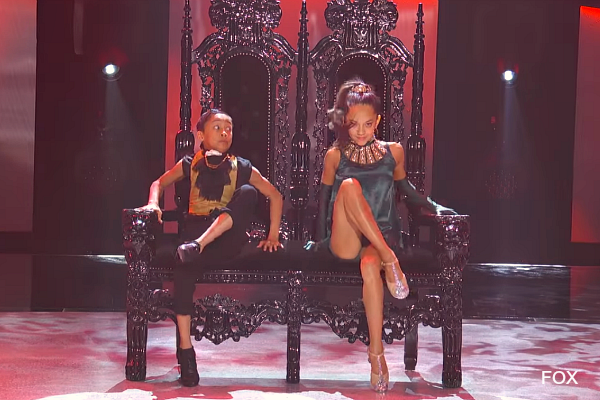 The first week of “So You Think You Can Dance” live shows last Monday left audiences with in an emotional state when All-Star Robert Roldan and J.T. danced a heart-warming father/son themed jazz number by Mandy Moore.

This week included dances from the kids paired with each other, as well as routines of them dancing with their All-Stars. Each child contestant pulled names out of a hat to give them who they’d be paired with as well as the style of dance they’d be performing. Some kids were very challenged while others were more embracing of the styles that they were not used to. 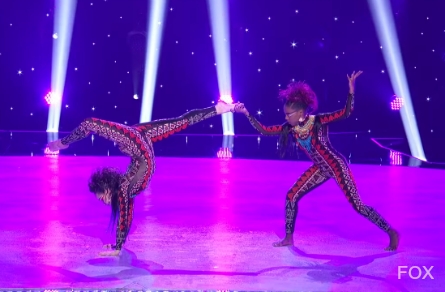 JORDAN & RUBY performed a challenging African Jazz number under Sean Cheesman’s choreography. Twitch said “it looked dope.” Nigel thought they complimented each other well and Paula noted the purity and attack of their performance. “That wasn’t an easy routine. Both of you did an exceptional job,” she said.

JT & EMMA danced a NappyTabs hip-hop number. Nigel thought J.T. was “uncomfortable” with the hip-hop dance and said he’d love to watch him grow. Paul thought J.T. was “all that and a bag of chips!” Maddie said she hasn’t mastered hip-hop, so she can relate. Twitch called it a treat of funk and labeled them “the swag of Tarts.”

Bonnie Story created a routine for JAKE & TAHANI that was a story about the process of coming out of being bullied. Jake said he used to get bullied for dancing. Nigel said together, Jake and Tahani are “superb!”

SHEADEN & DANIELA danced the Cha-Cha. The feedback from the judges were – Maddie told Sheaden to watch his posture. Twitch told Daniela to use some of her fire to bring her partner in. Nigel was impressed and said “I know hip-hop dancers who’d never be able to do that routine.” Paula ended on the “F” word She told Daniela to remember to have fun!

KIDA & TATE had the second NappyTabs number of the night. Twitch thought it was awesome that two individuals had to come together as one. “You did that” he stated. Nigel said they’re two of the best dancers on the show and Tate was great. Paula thought it was “incredible”. Maddie agreed with Paula, but noted that Tate needed to “get down a little more and a little loose.”

Jenna choreographed the number with her and Jake.

J.T. & EMMA came back with a Broadway number by Spencer Liff. Nigel said he’s a fan of West Side Story, but would have liked more of a connection between them. He thought J.T. was terrific. Paula said they’re good as a couple and “great execution”. Twitch said they “killed it” and thought they did better than he did when he was on SYTYCD.

JORDAN & RUBY danced contemporary by Dee Caspary. Paul said they pulled it together. Paula also added that Jordan shined so brightly that she needed to wear sunglasses, and Ruby rose to the occasion. Maddie thought they found their connection and called them “wonderful dancers.” Nigel noted that the dancers this week chose each other by pulling names out of a hat. “Both should be proud of themselves.” 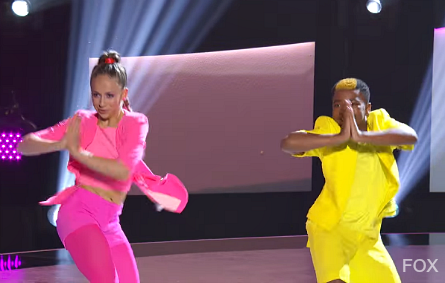 TATE & KIDA were choreographed by Nick & R.J. Maddie said the partner work is amazing. Twitch said it was a nice pairing and both equally shined. But, he advised Kida to work on the shape of his arms. Nigel said Kida’s bright, neon outfit was hurting his ears because it was so loud! Then, Nigel complimented Kida by stating he doesn’t know many hip-hop dancers that could have done as well as Kida.

DANIELA & SHEADEN had a Spencer Liff routine where they danced a Bob Fosse number. During their rehearsal, Spencer said Daniela and Sheaden are so tiny that they have to engage muscles that they aren’t used to. After their live performance, Twitch called it “amazing”. Nigel congratulated them on bringing out their personalities in the routine. When he asked if they looked-up Bob Fosse, Sheaden said “yes”, but Daniela said “no”.

Paula said Fosse is so unique and original and they really brought out the movement and did excellent. Maddie thought it was all amazing, but didn’t think Sheaden had the best technique. However, his personality shined.

TAHANI & JAKE was choreographed by new-comers to SYTYCD – Emma & Sasha from “Dancing with the Stars” show. Nigel noted that he wants to see Tahani get on her toes more. He also stated that It won’t be the last time for Emma & Sasha choreographing on SYTYCD. Twitch told them their versatility was great.

THE BOTTOM TWO  were announced as Sheaden and Daniela. After some deliberation the judges decided who they were keeping. Nigel said they decided out of 5000 dancers, 10th place went to Daniela and they’d be keeping Sheaden on the show.

Jonathan, who was Daniela’s All-Star mentor said Daniela will continue to be a star.