Younger and Stronger on THE VOICE Season 12 Premiere Recap 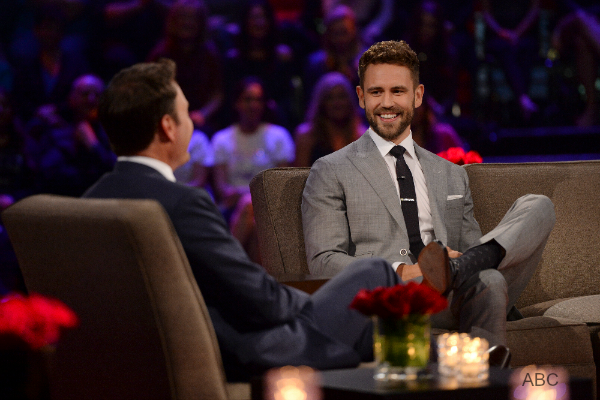 Before the start of “The Bachelor: The Women Tell All”, host Chris Harrison joined Bachelor Nick Viall in the show’s tradition of crashing multiple Bachelor viewing parties in the Los Angeles area.

Nick got bombarded with fans upon crashing “Bachelor” viewers parties one after the other until he finally got toppled over by the last group of some college-age girls while visiting a Sorority.

A short recap included the Shark vs. Dolphin controversy with Alexis’ costume from night one. Clips featuring the Corrine and Taylor feud and how Corrine beat her out in getting a rose from Nick. Harrison asked where did the drama begin? Between the first nap she took and taking off her top on the first date is where the friction started between the women and Corrine the women all agreed. Then, they went on and on arguing about how unprofessional Taylor was representing herself for holding a Masters degree in Psychology, yet put someone down such as Corrine.

Liz was first up in the hot-seat. Ironically Nick broke-up with Liz during the visit to the Museum of Broken Relationships group date. Why did Liz not pursue a relationship with Nick when she had the chance? She responded that she was getting over a relationship at the time and “I needed that period to heal.” Harrison defined it – “So Nick was a Band Aid”. When she saw Nick was available on the show, she wanted to try to see if there was a connection (there wasn’t!).

It had almost been a year since there one-night-stand and Liz thought by going on the show perhaps she could get a fresh start with Nick, thinking he may not recognize her (wrong again!). And, yes, Liz said she did contact him after their romp, but he was too busy for her at the time (perhaps preparing for “The Bachelor” show). Harrison never asked Liz the question (one that Nick wondered) if Liz was on the show seeking fame. We’ll never know.

Liz said when she left the show, it was hard on her because she had to explain what happened to her family. But, she learned that “people deserve to find someone who loves you for who you are. People don’t care about what you do but who you are.” The women rallied in support around Liz and said they adore her. Apparently, some of the women reached out to her and wrote letters to her after she left the show.

Next, the dramatic feud between Taylor and Corrine was summed-up with a replay of some of the most unpleasant, and awkward bunch of clips.

Taylor said it was a bit “rough to watch” and that some situations would have been great if they had not happened. Harrison asked Taylor what is “emotional intelligence” to her? Taylor explained it (in regards to Corrine) “her ability to regulate her emotions an to empathize and pickup on the emotions of the other women of the house. You aren’t aware of the impact of your words.”

The other women told Taylor that she walked around the house with her nose up in the air and aloof. She never made an effort to get to know Corrine. Corrine ran back stage to get a glass of champagne and brought it back to her seat with her. The audience loudly applauded.

Taylor said the show and Corrine had a direct impact on her and her career as a Mental Health Consular. Taylor asked Corrine for an apology. Corrine said she never said anything bad about anyone in the house until Taylor started treating her like a piece of trash. Ultimately, nothing was resolved from Taylor’s time in the hot seat.

Next was Corrine who said she never meant to be a villain or seen as promiscuous. “I was just being flirty and fun.” About that time when Corrine took a nap during a Rose Ceremony, she said she had an anxiety attack and was in no condition to go the Cocktail Party. She said she doesn’t care if they thought it was disrespectful, because no one knows what she was going through. Harrison said it wasn’t about naps. What was it about? Corrine said she didn’t know because she never said anything bad about anyone (until Taylor started taking jabs at her). 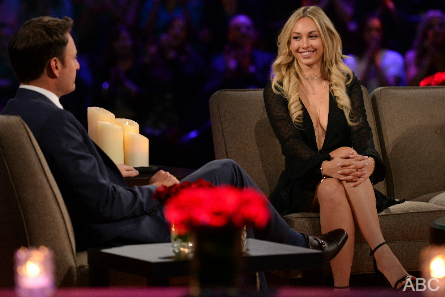 Corrine said she took offense to Taylor when she told her she probably wouldn’t be friends with her because she’s not intelligent enough. When prompted to do a formal apology with Taylor, Corrine said “no, it’s not going to happen.” On second thought, Corrine said “I’m not one to hold grudges. (To Taylor) Yes, right now I held a grudge to you. And its not fair how you spoke to me.”

Taylor apologized to Corrine for saying that outside of the show, she wouldn’t befriend Corrine and that she was wrong for saying that. Then Harrison asked Corrine about Raquel. Corrine said Raquel is a special person to her because she was there when she was told that her mother had ovarian cancer. Raquel moved from Jersey to Miami to be with her and take care of her. Corrine considered the word “Nanny” more of a respectful term over “cleaning lady”. Well! Next, it was time for pasta! Corrine gifted all the women there and the audience cheese pasta. 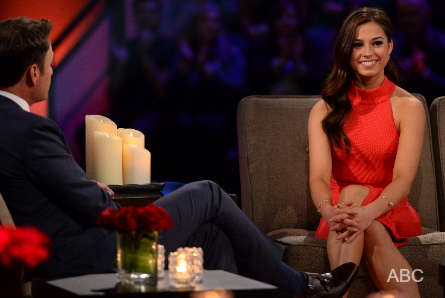 Kristina, who revealed her heart-breaking childhood story about being a child in poverty growing-up in Russia, then going into an orphanage, before coming to America during her one-on-one date with Nick, was sent home right before the hometown dates. Kristina got emotional while viewing the playback of her time on the show. She said it’s seeing herself being vulnerable and letting Nick in and all of America in. She said her parents never visited her and she put-up a wall so no one could get to her. Kristina said back in Russia, her teacher advised her if she went to America her life would be in color. If she stayed in Russia, it would be in black-and-white. “I’m proud of the woman that I’m becoming” and she thanked her parents who adopted her.

Liz was crying over Kristina’s display of strength and everything that she had gone through. Liz said “as women we should be building each other up and not tearing each other down.” Kristina got a standing ovation after revealing that she’s in touch with some children from the orphanage and Harrison said he thinks she going to change some lives.

Nick pointed-out that it’s his first Tell-All. Harrison reminded him, yes because his heart was “ripped-out at the end” of both of his The Bachelorettes’ seasons. Nick first attempted to get engaged to Andi Dorfman, and then to Kaitlyn Bristowe. He was rejected (in both scenarios) at the very last minute after being only one of two men left in each season.

Then, Harrison brought-up his relationship with Corrine. Nick said he likes Corrine so much because “every time you underestimate Corrine, she surprises you.” She took risks and he liked that. Corrine thanked him and called their time together special.

Kristina, Nick said, melted his heart. “Before I really knew her story, she exuded a zest for life.” Kristina challenged Nick as she sat in the group of women. He asked him if after their date did they have chemistry, fun and intellectual conversation. Nick answered “yes” to all. So, what was missing she asked. Nick answered “it was a brutal decision. Something in my heart said something wasn’t there. It was more about them (the other women he was dating) and less than about you.”

Nick didn’t have a lot of compassion for the women’s tears in complaining about how they were sent home. Nick said look, I was sent at the very end. He said as The Bachelor “the decision you make will make one person happy and the rest of the people unhappy. It’s tough.” Dominique said she expected more empathy from him. Nick responded sometimes “there’s that intangible thing that’s missing…I tried my best.”

Christen asked when he said he’s hoping for a greater love. Did he find that? Harrison jumped-in “to be continued next week.” Then, the bloopers reel was shown.

RACHEL LINDSEY IS THE BACHELORETTE! 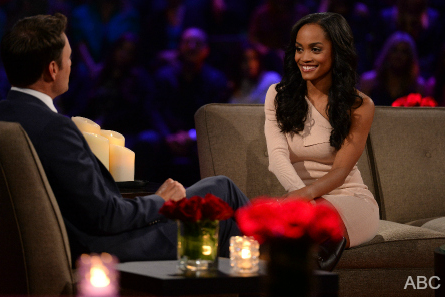 Rachel’s first response to being named the new ‘Bachelorette was that it’s humbling and a very surreal experience. Harrison asked what she’s looking for in a man. Rachel replied that psychically she doesn’t have a type. She loves to laugh and is looking for a guy that’s secure and confident and knows what he wants. She want’s a guy who’s ready to get married and have a family. Harrison said that could all happen in a year from now. Astrid said Rachel is the epitome of what a Bachelorette should be. All the women agreed.

Harrison brought-up that Rachel is their first black Bachelorette. Rachel said “it is a very big deal for me and it’s a lot on my shoulders. I’m ready to take it on.” She said she’s honored to be the one but doesn’t want it to be the focus of her journey.

Nick came back out to sit with Rachel and said he couldn’t imagine anyone better than Rachel. The guys of her ‘Bachelorette season will be very lucky to meet her. Rachel said Nick made her a believer (of love) and appreciated Nick for opening her up to what she wants in life and thanked him.

NEXT WEEK: Nick’s voice-over of him stating “I came here to find a love of a lifetime” against clips of him trekking through a snowy mountain. He said he’s in love with both Raven and Vanessa. But, also felt that way about Andi and Kaitlyn and he’s scared of getting rejected again. Then montages of him facing families and both women. In all scenario he’s still expressing that he doesn’t know which woman has his heart more. We were left with Nick’s last words in the teaser – “hopefully my heart will know what it needs to do.”