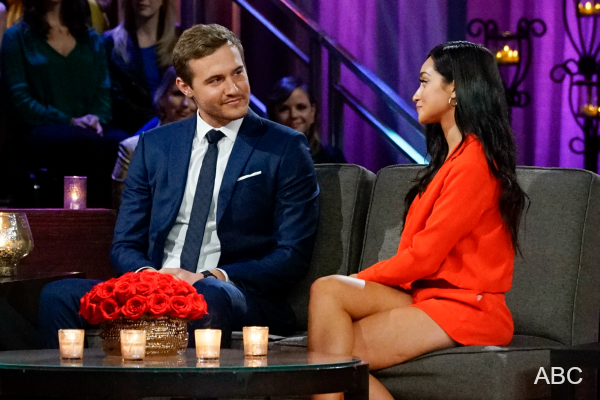 It’s “so unprecedented, so unexpected that no one knows how it will end.  “Not even Peter.” – Chris Harrison, “The Bachelor”

The women from “The Bachelor” season 23, (Peter Weber’s season) who attended “The Bachelor: The Women Tell All” included: Tammy, Alayah, Victoria P, Kelsey, Savannah, Deandrea, Maurissa, Alexa, Shiann, Lexi, Sydney, Mykenna, and Victoria F. Noteable women taht were missing from this season included Kelley, and Natasha who both made it far in the show.

After host Chris Harrison welcomed the ladies back in a studio setting with an audience, he prompted playback of footage from the show where Peter is in Australia deciding among the final women who are left. Viewers got to pick the show back up where it left off at where Peter and Madison looked like they might be breaking-up after Peter revealed to Madison he had slept with the two other women (Victoria F, and Hannah Ann) during the Fantasy Suite overnight dates. The biggest question, as stated by Chris Harrison, was, “will Madison accept the rose and will she show-up for the Rose Ceremony?”

Victoria F. and Hannah Ann were the only two women standing at the Rose Ceremony.   Obviously missing Madison.  Victoria questioned “where’s Maddie?” In her confessional, Victoria stated that she hoped that Madison didn’t come.

Then, Madison arrived, walking-up to Harrison first before joining the other two women for the Rose Ceremony.  Peter told the women how grateful he was for all of their relationships.  However, he would have to “hurt” one of them “right now” and it’s destroying him.  He then picked up the first rose to hand-out.   It went to Hannah Ann.  The next and final rose went to Madison.

When Peter asked Madison if she would accept the rose, Madison took a long pause before answering “yeah.”  Peter asked, “are you sure?”  She answered “yes.”   That meant Victoria would be on her way, and not hopes of meeting Peter’s family, nor an engagement.

Peter told Victoria that he was falling in love with her, but feels stronger for someone else.  Victoria said she felt “stupid.”  Peter assured her not to feel “stupid.”   In the ride home, Victoria said “it is what it is.”  “I was just hoping to find love,”   Victoria blamed Madison as being someone that could change Peter’s opinion on an ultimatum.  “It just sucks.”

Back to the studio audience portion with Chris Harrison. Harrison called it the most emotional Rose Ceremony he’s every witnessed. Then, announced the two night live finale of “The Bachelor” that starts the following Monday. It’s “so unprecedented, so unexpected that no one knows how it will end.  “Not even Peter,” stated Harrison.

In the studio where the women from this season were seated, they fought it out over one of the biggest arguments of the season – Alayah. More precise, the back-and-forth Peter was with Alayah and allowing all the drama that she stirred-up.   The women talked over each other so much that Harrison had to take “a quick time out.”

Harrison said he didn’t expect this to be this “feisty.”   Kelsey agreed with Shiann when she told her she acted “irrational” with the “champagne gate.”  Harrison asked Tammy about her shift from good/likable girl to villain when they went to Costa Rico.  Tammy’s next victim was Mykenna, whom said Tammy made her feel worthless and like she didn’t deserve to be there.  Tammy said she was concerned that Mykenna wasn’t ready to be there.  Mykenna’s last words to Tammy was to come to Canada and learn how to treat people with “love and respect.” After the commercial break, Kelsey was first-up in the “hot seat.”

KELSEY IN THE HOT SEAT:

Kelsey got emotional watching her journey back.  She said she “really envisioned” her future with Peter and she was “definitely in shock” when she got sent home.  Kelsey said with Peter, he makes you feel “so loved and so special.”  Then, Harrison brought-up “champagne gate.”  He asked what was going through her mind when the champagne came out of her nose.  She said she was concerned what her makeup looked like.  Harrison asked her about being “emotional on the show.  Kelsey said “emotions are a good thing,”  and it meant a lot to her that Peter didn’t run every time she cried.

Harrison brought-out Ashley I. from “The Bachelor” season 19 (Chris Soules season) and who was also a big crier on the show, to console Kelsey.  Ashley thanked her for representing.  “There’s no room in this world for emotional shaming,” said Ashley I.  She then had a suitcase handler from “The Bachelor” bring-out a huge bottle of champagne.  No one can steal it and she won’t lose it, stated Ashley I.

Next, was Victoria F. in the hot seat.  Then, a sneak-peek of an added show to the franchise “Listen to Your Heart,” which premieres April 13th on ABC network.

VICTORIA F. IN THE HOT SEAT:

Harrison said Victoria F. had the most passion with Peter. “It was a hot and heavy relationship.”  But, communication was difficult.  Victoria said she was frustrated with herself because she didn’t realize how much he cared for her.  “I wish I let him love me the way he wanted to love me,” stated Victoria about Peter.   She said she couldn’t get out of her own way.  Victoria said that Peter would write her letters on the show.  Peter was the one good thing that she had, she said and “it was easier to push him away and not have him at all,” so at the end she wouldn’t lose him.  Victoria said at the end of this, she’s going through a break-up.

Then, Harrison asked her about the accusations of breaking-up relationships as said be Peter’s ex-girlfriend on the show.  Victoria said “absolutely” never broke up any relationships.  She said “I could have handled it better.”

The next bit of business was footage showing Peter crashing some fan viewing parties. Then, returning to a fogged-up car with his parents in the backseat!! Next, Peter came out onto the stage back at the studio.

PETER WEBER IN THE HOT SEAT:

Peter told Harrison that there is truly no way to prepare to be “The Bachelor” even after getting advice from a lot of past ‘Bachelors.  Peter said he’s favorite part was all the relationships he got to explore.  Kelsey told Peter that she’s grateful for him because she learned a lot about herself and knows what qualities she wants in a man.    Harrison invited Victoria F. back on stage to talk to Peter.
Harrison invited Peter and Victoria to have a conversation.  She thanked Peter for being really patient with her and also apologized for putting him “through hell.”  Peter said “love is patient” and he really feels good about their relationship and what they took from it.  Victoria said the love that was there was “real.”

Peter answered Mykenna that he honestly didn’t know where his heart was going on not giving her a rose after the two-on-one date.  Savannah asked Peter about the drama and “rewarding drama” such as with Alayah.   Peter said he followed his heart.    Sydney said she thinks Peter did follow his heart and hopes to see him happy.  Harrison asked what he’d like to tell the ladies.   Peter said it truly takes a brave person because you open yourself up to the world.  Then, it was time for bloopers!

Former “The Bachelorette” contestant Rachel Lindsay (season 13) joined Harrison to address “some negative criticism ” and there is a line that has been crossed.  Thus, Lindsay was brought out to talk about it and she’s had experience.  Lindsay said it’s online harassment.  “People have become so comfortable with being mean.”  She said when she was asked to be “The Bachelorette,” she knew that it would be hard but wanted to represent women who look like her.  Sometimes she feels that her efforts have been in vain because she still gets a lot of hate.  Lindsay said it’s better for the viewers and studio audience to “see” and get visuals.  So, mean messages were displayed on the screen to show some of the online trolls’ messages.

One hundred percent of the women from Peter’s season raised their hands when asked it they have experienced “true hate.”   Alexa got hate mail regarding her natural hair.  But, also got a lot of positive feedback.  Sydney said she wants to be a voice to those girls who think they can’t do it.

After that, Harrison teased the finale show once again, “the most unexpected and complicated endings we have ever seen.”

FINALE PREVIEW: Footage from the finale episode showed Peter stating, “there’s no question I’m in love with Hannah Ann.”  But, is also in love with Madison.  Madison said she could see herself loving Peter for the rest of her life.  Dad asked Madison if she could see them completely compatible?  Hannah Ann got frustrated for giving, and giving and not getting back.

Then Peter got some unexpected news.  He’s seen apologizing to someone through the door.  Then footage is shown once again of his mother with tears streaming down her face and telling Peter not to “let her go.   It’s what love stories are made of.”

“The Bachelor” season 24 finale airs March 9th & 10th with “an ending that no one will see coming,” on ABC network.