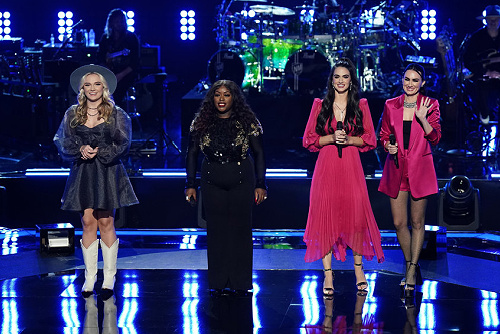 It was the last night of “The Voice” season 22 Knockouts.  With only five Knockout matches left, it almost seemed that the coaches went into the groupings with whatever artists were left on their Teams.  Some of the pairings didn’t make much sense.  One such Knockout that stood out the most was John Legend’s Kim Cruse vs. Emma Brooke vs. The Marilynds.  Even the artists Emma and The Marilynds were visibly shaken by having to go up against heavy hitter, power house Kim Cruse.

Blake Shelton said about his Team going through the 3-Way-Knockouts, it’s been “terrible” saying goodbye to two artists.  Carson Daly asked Camila Cabello if she’ looking forward to the Live Shows.  Gwen told Camila that they put a timer on them when they talk.  Lol!  Camila said it will be difficult for her.

John was the only coach with a Steal left.  He said he was hoping to Steal someone “amazing.” 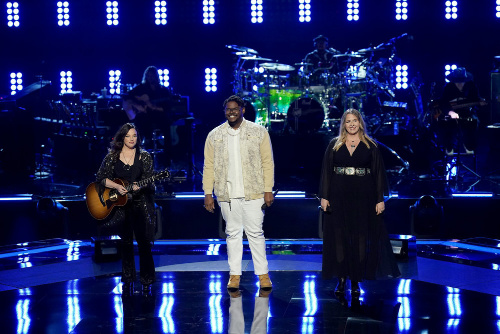 Justin thinks they’ll pull something out of each other that they didn’t know was there.  Gwen said she was looking for “who is ready to go to the Lives.”

Cara chose “Love Me Like a Man.”  She said vocally it’s an opportunity for hter to belt it out, and sing her heart out.  Gwen said Cara is a true artist who loves telling stories through song.   Justin observed that Cara is “like a firecracker” and he loves the challenge.  Gwen advised Cara to be more flirty and play with the character more.  Gwen wanted to take Cara to the next level.

“Can We Talk” by Teven Cambell.  Justin said he is a shy guy.  “I think it’s time that Justin Aaron gets out of the box.’ He wanted to showcase his church performing skills.  Gwen advised Justin to put more swag into his performance.   Gwen said, “he picked a song that doesn’t belong in church.”  She said she can see him find himself.”It’s going to be this crazy moment,” said Gwen.

Kayla said “Losing My Religion” reminds her of resilience.  Gwen said if Kayla sticks to the melody, it’s going to be a completely new song and people are going to go crazy.  Justin said Kayla’s voie “is haunting in a good way.”  Gwen said she wants to see them take it to the next level and everyone is equally good.

Camila said justins’ per “went into super-star land.”  She said Cara was “so sexy” and felt empowered.  She said they all brought the sauce and swag.  Blake said cala’s take on R.E.M. was so good and masterful.  Blake voted for Justin. John said he loved Kayla’s bravado and the flutter in her voice. Justin’s higher part in the song was “super star land,”  and Cara was flawless.  He didn’t know who to pick.  Gwen said she didn’t know either.

Gwen said watching them grow was fulfilling.  She said Cara was great.  Justin was performing for her and there was no swag.  It was 10 times flirtery on this stage.   The fact that Kayla was able to make that song her own, like she wrote it. 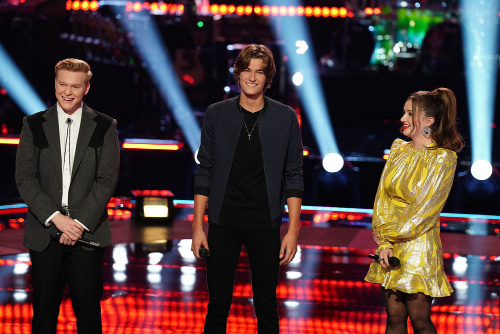 Blake said he wants to see which one is the most ready for the Lives.  Austin picked “You Look So Good In Love” by George Strait. Blake said if he’s true to himself and true to this song, he’ll win.

Eva chose “Dangerous Woman” by Ariana Grande whom she’s obsessed with.  She picked this song to show off her range.  However, Blake noted that Eva was more nervous than she was in the Blinds.  Blake told Eva that she’s one of the most powerful vocalists on this season.

Brayden chose “Mercy” because he’s always singing it in the car, and his Dad said it suits his voice.  Blake said Brayden doesn’t realize how good he is yet and he has everything that it takes to be a star.  Blake told him he has to give the performance of his lie and think about how painful  the lyrics are.

Blake told his Team “there’s never been this much pressure in the history of The Voice.”

Camila called Brayden’ tone “so beautiful” and has an emotional innocence.  Every girl is falling in love with him right now.  Austin has a cool thing going on.  Gwen told Eva that her spirit is so beautiful.  She told Brayden that he is so natural.  John said Austin is soulful and “authentic.”  He liked that Eva picked this song and swung for the fences. He thought she nailed it.

Blake said they all had their hands full. He told Eva that she put the work in.  Brayden got in the zone and it was “so good.”  He never sounded better.   Austin  has this fast bravado. Blake said he had people “freaking out back here.”

KNOCKOUT WINNER:  Brayden Lape.  Blake said Brayden is 16- years-old and he’s already so good.  “He has an incredible tone.” Blake said once they get into the Lives, Brayden could be holding the trophy at the end.

THE MARILYNDS vs. KIM CRUSE vs. EMMA BROOKE (Team Legend)

John Legend said what a great group of women with all different styles.  He Saved The Marilynds.  They chose “Chasing Cars” by Snow Patrol, they said, because it told their story with different struggles.  “It’s a full circle moment’ to be able to perform “Chasing Cars.”   John said the song shows all the strengths that the Marilynds have.

Emma chose “I Hope” by Gabby Barrett.  Emma said growing up she was classically trained.  She said her main goal is to be vulnerable and wants to prove people wrong that she can do other music.  John said “this song has an attitude” and Emma has classically trained and advised her to relax.

Kim chose “Can’t Stand the Rain” to channel growing up in the Country and not being able to go outside when it rained. She wants to prove that she’s more than the smooth, jazzy type of singer.  John said he wanted it to have this “Country stank” to it.  He said she has so much fire, and also honey and smoothness.

John told his Team that all they have to do is be the best version of themselves and leave it all on the stage.  “Give me that beautiful, perfect performance that makes you undeniable.”

Blake reacted that it was the best he heard Marilynds sing and compared them to Wilson Phillips.  He said Kim is “drowning” in the sauce.  Camila said she was starstruck by Kim and the stage was set on fire by her.  Gwen said The Marilynds did a very artistic version of the song. Kim is so talented and she’s so good at picking the right moments to shine.

John told Emma that he was proud of her looking more like a star each time she’s on stage.  Kim has all these gifts and does these little things that make it look like she wrote the song.  The Marilynds’ love for each other and love for the song was really powerful.  Each of them gave the best performance so far on the show.

KNOCKOUT WINNER: Kim Cruse. John said she’s a world class vocalist that commanded the stage and so intentional with everything she did.  America’s going to love her. He said it’s so tough when you have to send two people home.  Blake was bummed because he would have Stolen Emma. 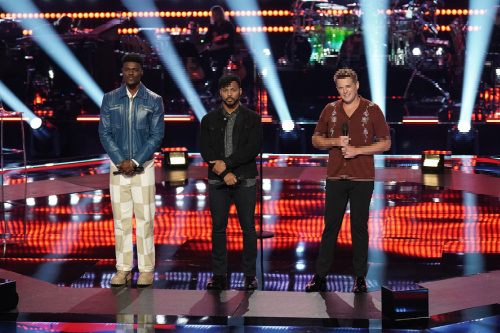 “These are my three emotional male vocalists,” said Camila about pairing Andrew, Devix and Steven.  Andrew chose “Everybody Hurts” by R.E.M.   He said the Pop/Rock genre isn’t necessarily his lane.  But, the song connects to him because he’s dealt with emotional anxiety.

Camila said if Andrew can get out of his head, it will be a great performance  Camila Saved Steven.  Steven chose “It Will Rain” by Bruno Mars.  Camila said it’s a vocally challenging song, and this Bruno Mars song could be a powerful moment for him.  He dedicated the song to his wife Danielle.  Devix said watching Steven is “scary” because he’s hitting notes that he can’t.

Devix chose “Yellow” by Cold Play.  Devox said there’s a lot of nostalgia with this song.  His family used to watch this song on MTV.  His mom had cerebral palsy and he’s gotten so much support from her, he wants to give that back.  Camila called Devix’s tone “so magical.”

Steven said the 3-Way-Knockout is “kind of savage.’    Devix said he’s struggled with stage presence throughout his career.  It’s obvious that Camila really cares about what they’re doing with their performance.  Camila said it will come down to who will come out of their shell.

Gwen told Steven that the song was really a good choice for him.  John said it will be amazing to see Andrew grow as an artist.  Devix “sounds like a star.”

Coach Camila told Andrew she loves his tone so much. But he can do better than what this song allows for his voice.  She’s proud of him.  She said Devix’s was a great song choice for him and he also came out of his shell and he did a beautiful job.  She told Steven that she can see his personality come out more and that was exciting for her.

KNOCKOUT WINNER:  Devix.  Camila said his voice “is unreal.”  He produces and is a creative force.  He puts his heart and soul into every performance.  She said Andrew and Steven integrated everything that they worked on.

John said for using his Steal, he’s looking for someone to excite him, someone that will knock his socks off. 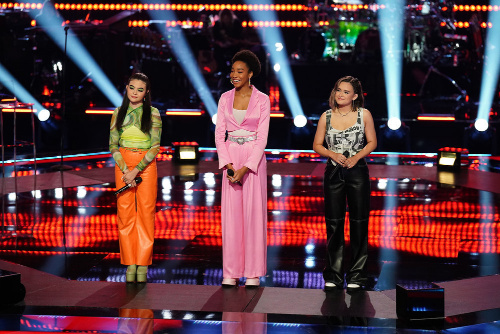 Gwen grouped them together because they’re all young and gifted.  Sasha chose “Make it Rain” by Ed Sheeran.  “You have to sing for your life and prove you deserve a spot,” Sasha said. Gwen said Sasha is an incredible singer and is deep.  She said she needs to sing the song like she wrote it.

Daysia chose “Get Here” by Alita Adams because it represents her tone and range.  She said the song is about overcoming your past experiences. “There’s so many barriers and you just have to push through.”  Daysia lost her mother. She said she replayed everything in her life that was hard, and got her there to that spot.  Gwen said the song is perfect for her.   Gwen advised her to build the song a bit more so she has the right intensity at the right time.

Alyssa chose “Don’t Stop Me Now” by Queen.  Gwen reacted “you’re crazy” but that’s what she likes about her.  Alyssa said she always wanted her Freddy Mercury moment.  Gwen advised Alyssa to use that “punkier” side.

After Sasha’s performance, Gwen was crying.  John told Alyssa that he sensed a little bit of Gwen in her.  He told Daysia that she’s such an old soul and she’s so talented.  John told Sasha that every note she hit was flawless. “Vocally, it was such a tour de force.”  He said Sasha was his favorite.  Blake told Sasha that he would go with her.  He asked Camila if she really let her go?

Camils said Alyssa’s star power has been there since the beginning.  With Daysia, it’s like going back in time.  The confidence that Sasha executed the song is crazy, and she’s 18.

Gwen said Alyssa is incredible and something that you can’t put words to.  There’s Daysia, when she hits tones that are right and is iconic.  Sasha did a perfect performance and she sings like she’s 35.

KNOCKOUT WINNER:  Alyssa.  Gwen said they’re all so gifted.  Alyssa is special. Gwen wants to see what kind of star she really is in the Live Shows.

STEAL – John pushed his button to Steal Sasha.  He said she deserved it and “she hit every note beautifully with such precision and control.”