The Ultimate Team Search – THE VOICE Battles Round 2 Premiere Recap! 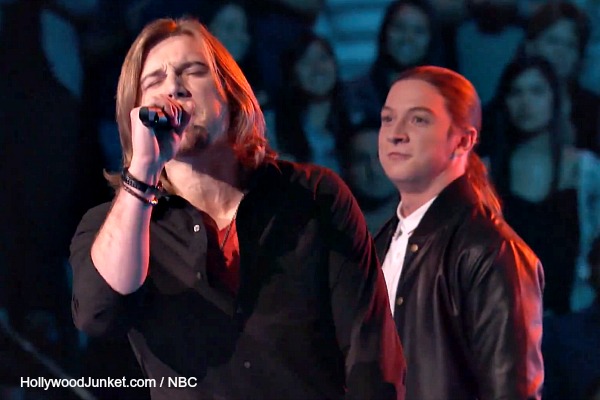 The coaches continue to send the best of the best into the ring to battle each other for the cream of the crop. Each coach has one final steal. Adam and Blake are the only two coaches who have one steal left each. Shakira used her steal last night on Tess Boyer – stealing her from Team Blake, and Usher used his steal to gain Josh Kaufman from Team Adam. This new round added to “The Voice” this season called “Battles Round 2” has really forced the talent to step-up their games. On last night’s episode, Adam said, “What’s so astonishing about this second round of battles, you really see people step-up.”

In tonight’s episode, Blake said, “I’m waiting on something unique the can come back and win this thing.” His team was up for the first battle of the night. It was a battle of two power-house divas! Adviser from the band “Coldplay”, Chris Martin was on tap again to give his advice to the artists and their coaches on all four teams.

Blake said he put Biff and Sisaundra together because he only has room on his team for one powerhouse R&B singer! Biff said “if you want to be the best, you have to battle the best.” Blake stole Biff from Team Usher. Sisaundra, who is a single mother, said “I’m here because my kids told me to go do it.” Biff was impressed by Sisaundra’s voice, “She’s just like a nuclear bomb when she’s going off screaming.” Blake said Sisaundra looks like a diva and Biff looks like a stud. Martin told Sisaundra, “when you’re that good you have to let people know that you are connecting with them.” He told Sisaundra to look at her audience. “Sisaundra is a bit too good. There’s only a few people on Earth that can sing that good,” said Martin.

Before the battle, Biff said “I want to make my kids proud. I want to prove that you can be relevant no matter how old you are. My goal is to win this entire competition.” Sisaundra said, “The fight to be heard was worth every moment. My plan B is my plan A.”

Biff former coach, Usher said, “I understand how difficult it is to pull this off. Biff to see you having gotten better, I’m proud of both of you.”

Shakira reacted to the battle “Biff, your voice is timeless and the way you work the stage you are so real. Sisaundra, your register is sick! Sick, sick sick!”

Adam told Sisaundra, “I’m eighty percent sure that you are not from planet Earth. With Sisaundra, you can tell that every ounce of it is real. Biff- you have the same thing that Sisaundra has.”

Coach Blake said, “You guys solidify why this is the best singing competition on the air. Biff is such an entertainer and he has so much style about him. Sisaundra, Adam is right, what planet do you come from where they can sing like that? That in itself is entertainment and lights up a room. I can’t miss out on the opportunity to work with a one in a trillion vocalists like Sisaundra. Sisaundra is the winner.”

Battle Winner: Sisaundra Lewis
Steal: None
Adam was the only one who could steal, he said, “I didn’t press my button because I’ve already taken Delvin” who he thinks is similar to Biff.

Not Dreaming of Harry Styles!
Deja Hall vs. Ddendyl

“I was excited because we both have soft voices and similar tones” said Deja about her pairing with Ddendyl.

They picked the song “Say Something” because they thought that type of genera would fit their voices well. Shakira said during their rehearsal “Ddendyl’s delivery was exceptional.” One problem is, Deja had never been in love. Shakira realized it would be difficult for Deja to connect with the song for that reason. Adviser Chris Martin asked Deja “what about Harry Styles?” She laughed. He said, “Me too!”

In place of a romantic relationship, Deja used her family instead for a way of connecting to the song. Shakira also coached Ddendyl and Deja on their body positioning during rehearsal. Shakira was anticipating that the girls’ battle would be tough because, “Ddendyl has issues with her stage presence and Deja has to connect with the content of the song. Its’ going to come down to whoever lets go the most and that’s what’s pure.” Deja said if she loses the battle, she’ll go back home singing in choir and school. “Music is what I want to do and this is where I want to be,” she said. Deja predicted, “If I can go out there and convey the lyrics to the coaches and the audience I think I’ll win this battle.”

Adam was amazed by their performance, and reminisced, “the first time we ever heard this song was when they did it on the show and it became a massive hit. It’s come full circle. It makes me really proud of being on this show. I can’t imagine two more different singers . Ddendyl doesn’t have much of a bravado, but stayed on key.” He said he loved the richness of Deja’s voice for her being so young.

Blake said, “Ddendyl you are so artistic. To Deja, there’s something so pure and honest about your performance and that is appealing to me. You are both incredible singers.”

“Both of you did really great. But, you’re right Adam, who do you chose to invest in? Because they are so different from each other. Deja, I would pick you,” said Usher.

Coach Shakira reacted to the battle with, “I love you both as people, as artists. Ddendyl is so artistic and Deja your voice is Earthly and Heavenly. During this particular performance, you both killed it! Really amazing. I think that one person has made the most progress and the most tangible changes. Therefore the winner of this battle is Deja.”

Battle Winner: Deja Hall
Steal: None
Shakira said she chose Deja because, “Deja is like a sponge. I want to invest my efforts in seeing her bloom as an artist.”

One battle that wasn’t shown on this episode was from Team Shakira.  It’s the second time the show has decided to clip Kristen Merlin’s battle performance.
Emily B vs. Kristen Merlin – TEAM SHAKIRA

Singing “I Can Love You Better” by Dixie Chicks

After the battle, coach Shakira said, “Even though Emily has this crazy register and can hit those high notes, Kristen has this unique tone to her voice. She chose Kristen as the winner.
Battle Winner Kristen Merlin
Steal: None

Usher paired Stevie Jo and Morgan Wallen for Battles Round 2. He told them, “I wanted my pairing to be fair and I wanted two voices that would compel either of you to be great and to be stolen.” Stevie Jo said he comes from a heavy metal background and winning the last battle gave him a lot of confidence. Usher said Stevie Jo killed that song and took ownership of it. “Its what will bring you through the next battle and hopefully to the end,” Usher told Stevie Jo.

Morgan’s day job is a landscaper and never had a voice lesson. He said to win that first battle knowing he didn’t do his best was very reassuring. Usher told Morgan that his last battle was “all over the map” but his confidence is what won him over. They chose to select “Story of My Life” song by One Direction to perform for their battle.

During their rehearsals Usher said “the song does represent them vocally and who they are becoming as artists.” Chris Martin saw the song as an advantage, stating ” Luckily that’s a song by a band where’s there’s five different tones, so it works.”

Martin advised Morgan to give his vocals more “intensity” when getting to a “quiet moment” in the song. Usher said, “Morgan has a tone like I’ve never heard before but when he gets on stage he loses it.” Usher wonders if “he’ll buckle under pressure.”

Before his battle, Stevie Jo said, “My parents really sacrificed their musical dreams for me” and he wants to repay them. Morgan stated, “If I lose this battle I’ll go back to landscaping and finding gigs. But I came here to win and that’s what I’m going to do.”

Singing “Story of My Life” by One Direction

After their battle, Shakira said, “I really enjoyed it! Morgan, I didn’t know you had that raspy tone and falsettos. It seemed you were a member of One Direction. Stevie Jo, I enjoyed your runs.”

Adam said, “That was a song originally sung by boys and was sung by a couple of men on that stage!” Blake reacted, “Oh, no he didn’t!” Adam continued “That was awesome! Morgan, I thought Stevie Jo was going to kill it. What was easy on paper became more difficult for Usher and that’s because of you Morgan.”

Blake told Morgan, “I’m impressed at how far you’ve come and did some things that I didn’t know you were capable of. Stevie, your technique I love it. You never miss!” Blake said he considered the battle “evenly matched” and he thought Stevie won.

Usher was very surprised by Morgan’s falsetto. Morgan was also surprised, telling Usher, “I just found out.” Adam yelled, “good timing.” Usher continued, “What that shows me is that you’re a student and you understand that you have to do that work and you did. Stevie Jo, you showed everyone here that you have a soulful essence. Man, what a talent!” Usher picked Stevie Jo as the winner.

Battle Winner: Stevie Jo
Steal: Morgan Wallen to Team Adam
Usher said he didn’t keep Morgan because he “is still finding out a lot of things about his voice. He hasn’t unlocked his full potential.” But, that worked for Adam who stole Morgan for his last steal. Adam called Morgan over at the end and pushed his button to add him to his team. Morgan said he was thankful that Adam hit his button. His mom was incredibly ecstatic to meet Usher.

Adam said he stole Morgan because “He has this rare soulfulness I don’t even think he knows he has. Seeing that quality in a guy with so little experience is really special.”

When the Battles Round 2 are done next week, the coaches of “The Voice” will have their Top 20 artists!