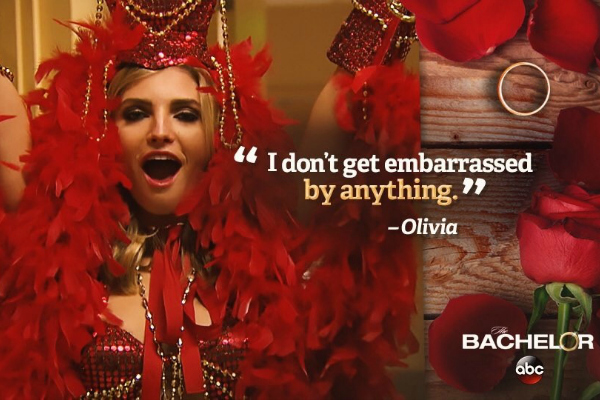 As the women of season 20’s “The Bachelor” continue to woo Ben for roses to continue try to win the ultimate final rose, the bunch moved their dates to Las Vegas for the week.

Jojo landed the first one-on-one date and on a helicopter pad atop of a building in Las Vegas which happened to be across the way from where the rest of the women were staying. They got envious when they shared in Jojo and Ben’s fireworks show and could only imagine the other fireworks display going off which was Ben and Jojo making-out. Ben gave Jojo the Date Rose.

The women who shared Ben this week in a group date were: Amanda, Jubilee, Caila, Lauren B., Amber, Haley, Emily, Leah, Lauren H. Jennifer, Rachel, Olivia. The only woman left was Becca for the second one-on-one date.

Ben took the women to “America’s Got Talent” second season winner Terry Fator’s theater. Fator won for his exceptional ventriloquist talent. The women, had no exceptional talent, but were expected to display one in front of his audience of 1200 people that same night while opening for his show. Overall, the women were creative in coming-up with some sort of skill. The twins were grateful for their parents making them take River Dance classes. Other displays of “talent” included hula hooping to a scantily clad dressed Olivia jumping out of a cake. 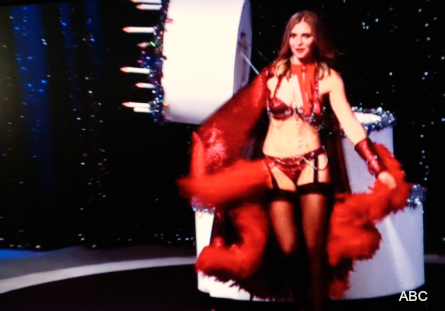 Olivia’s obvious uncomfortable appearance made the other women and Ben also uncomfortable. Afterwards, Olivia experienced a bit of a panic attack and anxiety. Olivia spent the rest of the episode communicating to Ben that she is really confident, and not a loose cannon that she appears to be.

Before Ben picked Becca up for her date, a large dress box arrived (a la “Pretty Woman”) and what was inside was a very unexpected white wedding gown. Jubilee made the comment that she is perfect for the white wedding dress since she’s still a virgin and Ben shouldn’t expect any action any time soon. 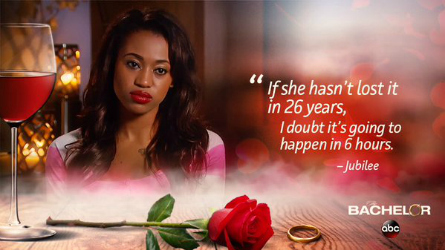 The first part of Ben and Becca’s date took place at Las Vegas’ popular “The Little White Chapel” where Ben scared Becca half to death when he acted like he was going to propose marriage to her. He was actually there to marry other people and got officiated to do so. She may not be his snow white bride yet, but Ben called Becca “perfect” in every way and gave her the Date Rose.

Since the twins are from Las Vegas and their mother still reside there, guess what? Ben and the show’s producers thought it’d be the perfect opportunity to let Ben decide which one of the twins to keep. It was also cheaper for the show in airfare to drop off one of the twins there since they were already IN Las Vegas.

After a candid chat with their mom, the girl that Ben decided to keep was Emily. Before Ben made his pick, Emily already knew and coldly said to the camera that she wished Haley would “go home” so that her and Ben could progress their relationship. Haley was heart-broken. But, mom was there to pick-up the pieces.

This time Olivia was the second woman to steal Ben away for a conversation, only because Jennifer beat her to the punch of being the first. Olivia succeeded in making things more awkward than they already were after her risque cake sexy dance by telling Ben she’s “falling” for him. Then told Jojo what she told Ben and that he reciprocated – which he DIDN’T! Olivia defined a hand squeeze reciprocating.

See who got a rose, who went home and what happened during the live after-show here!