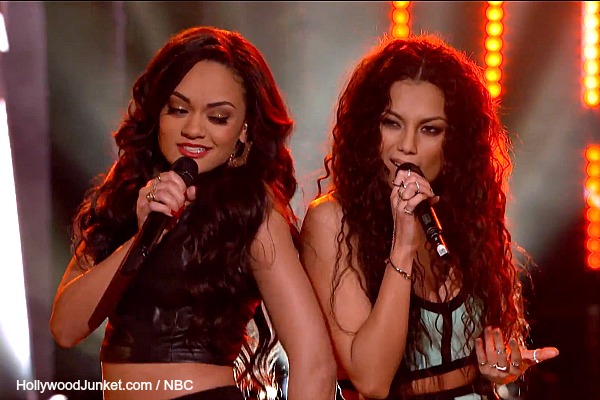 Shakira starts the Battles out tonight with artists Clarissa Serna vs. Jeremy Briggs.

Jeremy sang “Bad Company” and had two chairs turn around. Miranda Lambert is Team Shakira’s adviser. Jeremy and Clarissa are two rockers and Shakira decided to give them the song “Cold As Ice” to sing by Foreigner. “Someday you’ll pay” Shakira said is the strongest line in the song. “Clarissa’s got a lot of grit to her, but I know she was holding back” Lambert observed. “Confidence is the quintessential ingredient to rock” Shakira told Clarissa. Shakira told them that they should “feed” from each other and not battle each other even though it’s a “battle”.

Jeremy said he doesn’t want to go back to working for the Post Office and that this is his dream. Clarissa said she’d like to make the “Chica” (her singing group for young girls) girls proud.

Singing “Cold As Ice” by Foreigner.

Adam said about the battle, “The end of it as the best part, and it was powerful.” Blake was impressed, “Jeremy was singing that song in the same key as Clarissa. Oh my God. Still, that’s a tall order. She’s a powerhouse. I’d pick Clarissa.” Usher said to Jeremy, “You one hundred percent attacked it. But for the effort and tenacity to take it on, I give it to Jeremy.”

Coach Shakira reacted to the battle, “Jeremy at times fell in the pocket. You don’t need to do so much. Your voices compliment each other. You sound good together. It makes it hard for me to decide. I can do a lot more moving forward…I’m going to pick Clarissa.”

It’s a battle of a doughnut shop worker, Caleb Elder and a Barista, Delvin Choice. Team Adam’s adviser Aloe Blacc said, “You get these awesome moments that wouldn’t exist otherwise. Adam said he Chose Aloe because he likes his soulfulness. Caleb is the doughnut shop worker who lost it when Adam turned around for his blind audition.

Dr. Dre told Aloe that he needs to write better songs. They chose a song that’s about overcoming your obstacles. “I like the gravel” Adam said about Delvin’s voice. For Caleb’s voice, he said “I like the gravel and I like the pain.” Adam said their challenge with the song is staying rhythmic with it. Learn it, live it” Adam told him. Aloe was disappointed during the second rehearsal that they didn’t fully learn the song yet. Caleb said he is being pushed out of his comfort zone with learning the song.

Singing “The Man” by Aloe Blacc

Blake noticed some issues, “you both had some problems. I hate being critical of a 19 year-old. But Caleb left the door open for Delvin…I choose Delvin.” Usher agreed, “Delvin when you hit the high notes, you kind of took Caleb to church.”

Shakira said, “what I like about the performance is that it was fun. Is should be a pleasurable experience. I gravitate towards voices that are deep. That’s why I pick Delvin.”

Coach Adam reacted, “It’s remarkable that Shakira speaks English as a second language and she speaks better than Blake. It’s a big deal that you guys got to this point. Caleb you do have a thing in your voice that needs to mature. I am beyond proud and you have both shown me major improvements. The winner of this battle is Delvin.”

Battle Winner: Delvin Choice
Steal: None
Adam said he chose Delvin because “Delvin has this booming voice that is captivating. His ability to do a song and blow people’s mind is coming.

It Could Turn Into A Cat Fight!
Brittnee Camelle vs. Melissa Jimenez – TEAM USHER

Usher and Shakira turned their chairs for Brittnee who is a nursing student during her blind audition. Melissa said she really wants to be a soul artist which is a change from performing with her father’s Latin band.

Their adviser is Jill Scott. Usher chose the song “Give it to Me Right”. Usher said because it’s perfect for showing the “aggressor” in both Melissa and Brittnee. Scott told Brittnee “when I listen I hear a story, but when I look, I see a wall.” She told Brittnee to get rid of the attitude.

Usher told the girls, “You both have the opportunity to stay on the show, but you have to work for it.” Usher also said, “It could definitely turn into a cat fight.”

Singing “Give it to Me Right”

Shakira said, “I thought it was awesome. Edge, sauciness, and smokey hot!” Adam said “Blake must be having a heart-attack” because of their hot performance. Blake said he had to take a moment. Adam continued with his critique of the girls, “Even though Melissa hit that note at the end. I think Brittnee has a strong voice.”

Blake said, “This battle makes the most sense out of all of the battles. That note that Melissa hit, was straight up desperation.” He said the fact that she can do that, “won that battle for you.”

Coach Usher said, “You both can individually shine.” He told Brittnee, “With those big notes, it was great that you were able to show control.” He continued with, “I actually do regret putting you on the stage together because I actually want to keep both of you now. The winner of this battle is Melissa.” Usher commented on why he chose Melissa – “Melissa and Brittnee’s battle was epic. I felt that Melissa gave a little more.

Adam and Shakira both hit their buttons to steal Brittnee. Adam said, “When you sang, it was powerful. I think a lot is going to happen for you.” Shakira said, “you really have an impressive voice and can move on stage. I’m your girl. I understand female Pop singers.”

Adam fought back with, “I understand finish lines and I enjoy crossing them which I have twice on the show.” Brittnee chose Team Adam.

Next week on “The Voice” the coaches only have a few steals left and “will pull out moves, you’ll never see coming”.

Watch THE VOICE season 6 episode 9 “The Battles Premiere, Part 2” first aired by NBC on Monday, March 18, 2014. This full episode is now available at HOLLYWOOD JUNKET until 06/19/14 courtesy of NBC. ENJOY!