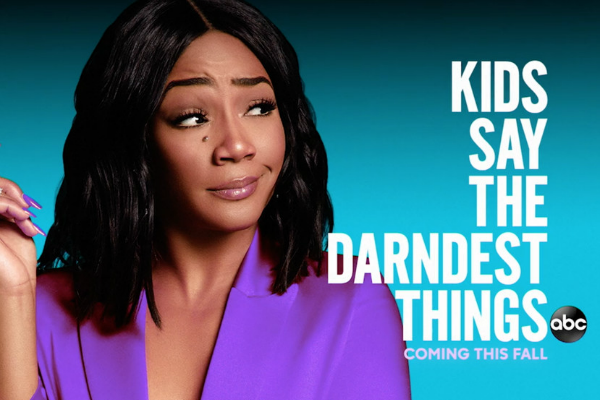 ABC’s revival of an original CBS network show called “Kids Say the Darndest Things” hosted by comedian Bill Cosby at the time, has had a 2019 revision of sorts. It brings kids of the 21st century to answer anywhere from the most thought provoking questions to the most basic with comedian Tiffany Haddish at the helm as host and executive producer.

Haddish couldn’t be a more perfect choice in host of the new “Kids Say the Darndest Things.” At the top of every set-up with a group of new kids on stage, Haddish enters and gives each child a full-on dead pan look, locking eyes with each one before moving-on to chose to speak with the first one. One young child of the age of eleven, challenged Tiffany with her own sassy look back at her.

Hollywood Junket was in attendance during one of the tape days to get a sneak-peek. Each episode starts with Haddish happily bouncing out onto the stage typically wearing a semi-casual suit with her hair cut in a short bob, to the tune of the show’s titled song in which she sang and said she spent hours in a recording studio to record it. Then, she goes in to her opening monologue.

The children are typically brought-out in groups of two, or more and are seated in bright colored bolted-down chairs which sit on top of a small circular platform on top of the stage. This happens after Haddish comes out to do a brief stand-up monologue routine which is pre-written and displayed to her on a teleprompter. So, don’t expect a typical Haddish stand-up comedy routine. After the first few days of wearing heels, a more comfortable and trendy option replaced the heels which were white chunky sneakers. Definitely a better choice to go with the youthful show.

The show consists of a studio portion with a live audience as well as on-location sketches that taped after the studio portion wrapped. Haddish commented on a piece that she had to read about in the teleprompter that eluded to her being on a farm with some kids. She exclaimed “I get to do this…cool!”

According to an ABC press release, the new version of “Kids Say the Darndest Things” will include themed comedy segments each with their own titles. Some of examples are as follows: “Kids Rule” is where the kids explain “the rules for everything from sportsmanship to dating. In “Love Talk” segment, Tiffany will get love advice from the kids. Another segment called “I’ll Be Right Back” will film the kids on hidden camera after Tiffany has left her post at her office desk. Then, in “Granny Tiff,” Tiffany wears a grandma disguise to let the kids advice her about technology.

The original series focused on child guests from ages three to eight. What we saw of the the new version, kids ranged in ages five to eleven. The great part about the show is that is has all variations of children, from the very smart and talented, to the very innocent, yet popping with personality. One example is when Haddish asked a six-year old girl how much does a home cost in California. Her answer was $500 to $7,500. When Haddish asked the same question to a genius child, his answer was $20,000 to $500,000.

The whole time the kids are on stage conversing with Haddish, their parents await not far off-stage while seated in the audience watching-on. “Kids Say the Darndest Things” also shines a spotlight on some deserving, impressive talented kids by bringing them out to display their talents whether it be smarts or musical. One young girl amazed with her singing vocals, while another young boy age nine wowed everyone with his piano skills while doning a custom made outfit (made by his mom) inspired by Mozart. The young boy was of Japanese decent and Haddish asked him in Japanese if he spoke Japanese. He answered back that he speaks “a lot of English.”

“Kids Say the Darndest Things” studio tapings took place on the stage of the Nate Holden Performing Arts Center located in mid-city Los Angeles where the stage acted as a chameleon that could easily be changed with various projected graphics onto the stage’s backdrop to fit-in with various topics explored by the host.

As with most of the child guests on the stage, Haddish asked them if they’ve seen a movie she lent her voice to, “The Lego Movie 2: The Second Part” which she voiced character “Queen Watevra Wa’Nabi.” Most of them said “yes,” but didn’t know she was in it. When Haddish asked the young pianist, he responded that he did see the movie. After she prompted him to name his favorite characters, he never named her character. After listing-off six “favorite characters,” which didn’t include hers, he admitted that he did in fact know that she was in the film and was having fun with her.

Another super talented kid brought onto the show was a young ten year old boy named Elliot who is in his Junior year at a University, and aspires to be a theoretical physicist like Albert Einstein. More mind-blowing is – that means he was eight when he started AND he was home-schooled! Elliot is not only book smart, but socially aware as well. When Haddish asked about his parents intelligence, he replied that they are smart in their own ways and at what they do. When she asked him what is the hardest job. He answered probably the President.

Haddish also throws-in some adult humor which will be caught very quickly only be the adult viewers. One young boy talked to Haddish about astronomy and said it would be really hard to escape a black hole. Haddish joked that she escaped a black hole just fine! The studio audience chuckled loudly at this. Another boy of around the age of seven talked about his job of cleaning bowling balls at a bowling alley where his parents work. She confirmed “so you get paid to clean balls?” Then, added, “I had that job when I was young too.”