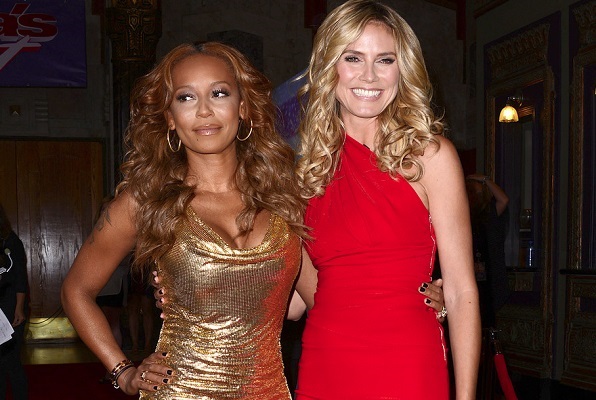 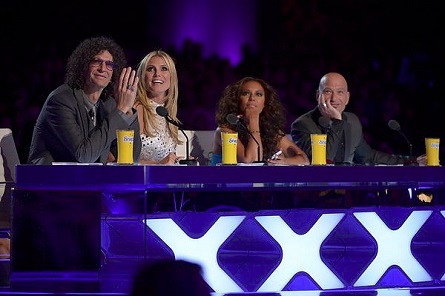 Pictured (center) new judges Heidi Klum and Mel B. on AMERICA’S GOT TALENT.

During a press conference interview, Heidi and Mel talked about their favorite acts this season on “America’s Got Talent” (AGT). Heidi said that out of a lot of acts that try out for the show, forty to forty-five acts per day are seen. Most of them land on the cutting room floor, but the show makes a compilation reel that shows snippets of some of the ones cut.

Heidi’s Favorites:
During one of the eliminations, Heidi said that when it came down to American Hitman and Anna Christine, she would have changed the rules if she could have from only four acts moving-on to five instead. “I would have moved five forward,” she said. Heidi includes in her list of favorite AGT acts the following: Ruby and Jonas; D’Angeleo and Amanda; Alexandr Magala; Ciana Pelekai; Kid the Wiz; and Timber Brown. 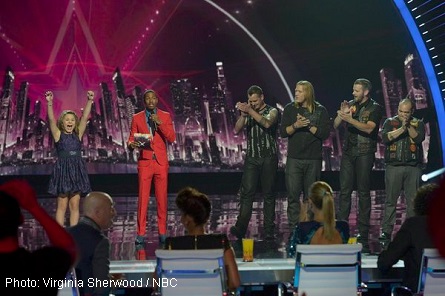 Mel agreed, “It’s really hard to choose.” Heidi answered the question – what makes a comic stand-out? “They stand out if they make us laugh. There’s always an audience. The people at Radio City Music Hall laugh and think it’s hysterical and it’s not funny to me. Whats funny to one person is not funny to someone else.”

Heidi talked about a couple of the past acts this season. “I love Branden [James] and I think he has the potential to get very far. I think America fell in love with him like we did. Another contestant that I fell in love with is Johnathan Allen. He is a very, very good singer too and also has a very sad story too. The first time that he opened his mouth and sang I was so happy for him that he has this talent.”

Expect the Unexpected:
Mel B. said the biggest thing about “America’s Got Talent” is that you don’t know what to expect on stage. Entertainment is entrainment no matter what it is. It’s easy to judge for me because I’m an entertainer and I like to be entertained. It all really depends on if it’s entertaining.”

Heidi talked about what it’s like to chose between the acts and how to select the keeper in the crowd each week. “For me it gets hard when they’re all equally good. To say one person is better than the other that’s when it’s the hardest because they all deserve to be there. When they all deserve that shot in Las Vegas for me that’s the hardest. Its hard to burst someones bubble and say sorry you’re not going on.”

The act that has shown the most growth, Heidi said, is Collins Key. Heidi said, “He started with smaller magic tricks where he made one dollar disappear then it was in a closed snack chips bag. Now he did this crazy trick where he gave everyone a name. We said it right then in there how could he have it on a piece of paper. It was crazy. He is someone who grew from act to act.” Mel B. siad, “one of my favorites was Tellavision. But they didn’t make it thru I thought that they really stepped up their game. I thought they were brilliant.” Heidi said they reminded her of Blue Man Group

Mel talked about what the acts get out of being on “America’s Got Talent.” She said “They get exposure to 50 million people each week. They get experience of what it actually takes to perform LIVE and deliver.”

Making Your Own Destiny:
Heidi agreed and made the point that “it’s good to see how many talented people are out there in the world that we don’t see or know about. Maybe like someone in your office and they’re standing in line to audition for AGT. You never know – maybe one of them will win the $1 million and go to Vegas. You have to be in it to win it.”

Heidi made a profound point about the true winners of competition reality shows such as AGT. She said, “Every year there’s all these dreamers. At the end of the day everyone has to get put in their place as to how good they are. Maybe someone else is better. At the end of the day it’s always up to you (the contestant) to continue. I tell the girls (on Top Model) all the time- pack your bag and go to either Paris or New York. You can’t win Germany’s Next Top Model and sit by the phone and think somethings going to happen. Once you win you have to keep working. It’s the same with ‘Project Runway.’ The people who work, and put their clothes on and go to events and hustle. It’s up to you at the end of the day if you win or second runner up it’s up to them to keep going. To put themselves out there and be professional and do it. You are making you’re own destiny.”