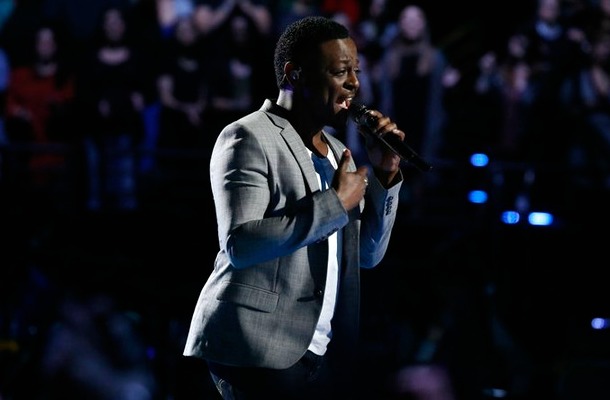 “The Voice” results show will leave only three out of five artists standing. But, one artist will have the chance to make an ultimate comeback with The Voice’s first ever “Wild Card” spot. America will vote to choose who they want to give the fourth spot to.

For the first time, an eliminated artist can get back onto the show and possibly win. The Top 5 sang last night to narrow down to the Top 3 in tonight’s Results Show. In that episode, Adam said “tonight is the best Top 5 we’ve ever had.” Blake said it was “out of this world.” Gwen said “everybody at this point is so good, I feel nervous.”

In the Top 5 performances coach’s comments, Blake told Craig Wayne Boyd that it was the best performance that he has ever heard. Adam gushed over Matt McAndrew’s performance – stating, U2’s “Bono would be so proud because you just killed it!”

Eliminated artist from the Top 12 will get their last chance to return to the competition when they must sing to win-over America for the fourth spot in the “Wildcard” vote.

Host, Carson Daly revealed the three artist with the highest number of votes from the live performance show last night. The first one was Chris Jamison (Team Adam). The second finalist announced was Craig Wayne Boyd (Team Blake). The third artist – Matt McAndrew (Team Adam)! The voting will end the earliest it has all season – at 3am. Daly will announce the 4th artist on the Today show on Wednesday morning.

Blake told Reagan James that every time she gets on the stage, she gets that much better.

Jessie sang “Zombie”. Blake said “This girl is so important just to music. She’s inventive and she’s a writer.” He said Jessie “is that different, and that important.”

Adam complimented Anita’s “jazz run” and called her “crazy” good. Gwen said Anita took this opportunity not for herself, but to “lift” with the message she sang in the song “Waiting for the World to Change.”

Taylor sang “Wicked Game”. Blake said he’s always impressed at how he changes melodies. Pharrell said Taylor is “really, really is an artist.” Gwen said “this is an amazing opportunity to comeback, and I think you’re going to do it because you connect with so many people.”

Singing “Gernade” by Bruno Mars, Damien took a shot at gaining the Wild Card spot. “The amount of control that you have is so scary….a real soul singer and you deserve to be in this competition”, said Pharrell. Gwen told him how he sings – “it’s incredible.” Adam said “There is one more spot in the Top Four, and it’s Damien’s!”

Sugar Jones gave an impressive performance of “Black to Black”. Former coach Gwen told Sugar that singing is ALL that she should be doing in life. Blake said “Sugar, you just made this so much harder for everyone else.” He turned to the coaches, and said “It felt like the first time we heard her, like her blind audition.” Pharrell said “America needs to vote, and they have to vote for her. When your mouth opens, this whole world of soul comes out and you captivate everyone.”

Luke begged America to “Have a Little Faith in Me” for his Wild Card song. You dug so much deeper than you have before” Adam said and he’s glad to have Luke back. Blake said he did a good job of not “over-thinking it.” Pharrell said Luke “definitely found himself,” and said he has a special voice. Pharrell promised to be part of Luke’s bright future.

After Danica’s stellar performance, coach Pharrell reacted, “you hear that sound (audience cheering and shouting)? That’s the sound of America voting you back!” The show had no time left for comments from other coaches,.

Thank you America for giving me another chance! This moment will stay in my heart forever! Love you guys! ???????????????? #VoiceWildcard