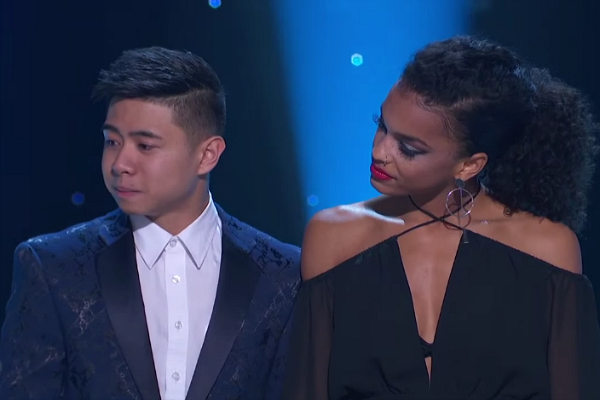 FOX’s reality dance competition show “So You Think You Can Dance” (SYTYCD) left audiences with a bang after a stellar season 16 finale live show. The Top 10 opened the night’s performances with a Mandy Moore group routine. Then, the Top 4 broke-away from the pack making their intros separately, followed by the Top 6 who were introduced, two still with their partners – Benjamin and Anna, Madison and Ezra. Stephanie and Eddie’s partners, Gino and Sophie, remained in the Top 4.

Host Cat Deeley introduced the judges who each picked their favorite routines this season. The Top four also chose their favorites which they performed. A special bonus dance number was added of a new group routine with Cyrus and Lauren that will be in the SYTYCD tour.

The first performance of the night was a Laurieann Gibson pick of a Ray Leeper routine performed by Bailey and Mariah. Laurieann exclaimed using her catchphrase that these “boo caters” and “I need a little tempo.”

Nigel Lythgoe’s first pick of the night was also a Ray Leeper routine. This one was danced by Madison and Ezra. Nigel said Leeper demanded so much control and chemistry. One of the sexiest dances. Nigel added that Madison and Ezra gave and “amazing performance” and “somehow Madison managed to keep HER hat on!”

Next, Dominic Sandoval chose a routine performed by Sophie and Eddie choreographed by Travis Wall. It was the routine where Eddie come to the aid of Sophie at a party.

Kicking-off the Top 4 picks, Mariah Russell chose her favorite as the James Bay “Slide” routine where her and Bailey were on a rooftop, choreographed by Mandy Korpinen & Elizabeth Petrin.

Mary Murphy’s pick was, she stated, “one of my favorite dances is the Jive.” Mary said in this routine, Gino had a “major breakthrough this night” and had “a lot of body ticking like James Brown!” His partner was Stephanie Sosa and they Jived at the gas station.

Next, a replay performance of the Top 10 to Harry Styles “Sign of the Times” choreographed by Travis Wall.

Dominic Sandoval noted that he noticed himself selecting only the “emotional” favorites. He stated in this piece danced by Anna and Benjamin with Ann at the piano, “their movement explains this entire piece.” After the encore performance, Anna and Benjamin got a standing ovation from the judges. Cat said it gave her “an aching heart.”

Mary selected a piece where Gino got to play the King to All-Star Comfort Fedoke’s Cleopatra. “Awaken his soul she did…took over,” and Gino was on precision and “down into that pocket,” in the Hip Hop routine choreographed by Luther Brown.

Cat asked Nigel about an amazing moment. Nigel responded that “we’re meant to move,” and can’t think of a better way of moving than dancing. We should consider every day lost is we haven’t danced. Nigel stated in the words of one of his idols. With that, Nigel re-introduced Phoebe whom fans know and love from this year’s auditions. She performed a solo and received a standing ovation from the judges. It was Phoebe’s dream to be on SYTYCD.

Sophie Pittman made her favorite pick. But, first mentioned some of her favorites from this season that included the Elvis Presley routine, when the party’s over with Eddie dance, and the sushi dance. Her pick was a Contemporary piece that “stood out.” The routine with Gino choreographed by KC Monnie about when KC came out of the closet. Sophie stated, “I got to tell KC’s story” in this dance number. Sophie said she was “excited to perform it and let everyone see the magic.”

SYTYCD viewers were treated to a special Luther Brown number that will be part of the SYTYCD tour. It included the Top 10, All-Stars Cyrus, and Lauren.

Next, judge Dominic was surprised with a throw-back video from his audition in season three of SYTYCD, wearing a do-rag. The video also included Mary and Nigel when they sent Dominic through to the next round. Cat asked Dominic about his next favorite. He said it’s a Ray Leeper piece with three “strong women, amazing choreography.” Thus, enter Madison, Sophie, and Mariah to perform it.

Mary had another pick which she opened by stating “it’s really kind of hard for me to talk about sometimes because it’s Bailey. No other contestant has affected me. He makes the impossible, possible. He makes me cry like a baby.” It was Bailey’s first Broadway routine by Al Blackstone danced with All-Star Koine.

Laurieann introduced an additional pick with “it has given me so much hope, so much inspiration. Judges can I get an Amen? Talia did it right,” she stated, referring to choreographer Talia Favia. It was an exceptional and memorable routine with Bailey, Ezra, and Gino. After that, a bloopers reel played. Cat teased, “we hold the art of dance in the highest possible regard.”

Next, Gino Cosculluela had his favorite pick which turned out to be the Elvis “Trouble” routine choreographed by Jonathan Redavid. Gino stated, “the style is so hard because it’s like Jazz. But, it’s also Swing. I will never forget that dance.”

Bailey’s favorite routine was an “all-time favorite” his Jazz from two weeks ago because it’s so different from what he’s like. It required him to be sexy. “I’m going to cherish that for the rest of my lift” stated Bailey about the dance number, partnered with Mariah.

A video clip played of the Top 4 expressing what they’d do with the $250,000 cash prize if they won America’s Favorite Dancer this season. Funny comments included Bailey who said he’d be a “Sugar Daddy,” then later cried that no one thought he could do it because of his height.

FIRST RESULTS: Cat Deeley stood on stage with the four dancers to announce the first round of America’s votes. The votes revealed Sophie Pittman as fourth place runner-up. The next routine was danced by Gino.

Nigel stated that only Gino and Lex has done triple xx’s on the show. “This is a unique Al Blackstone routine,” that shows me how much I love Jazz. Nigel said next season will have a Top 20 without the Academy! This was a huge announcement because it’s what SYTYCD fans have been craving for, for a long time. He later said in an interview, that it’s still up to the FOX executive whether or not the old format will be brought back.

Laurieann said here other favorite routine choreographed by Robert Roldan, inspired her “to love each other while we’re here.” It was performed by Ezra and All-Star Gaby Diaz.

FINAL RESULTS: Cat announced that there was less than a one percent difference in the votes between third and second place. Third place winner went to Gino Cosculluela. Only dance partners Bailey and Mariah remained.