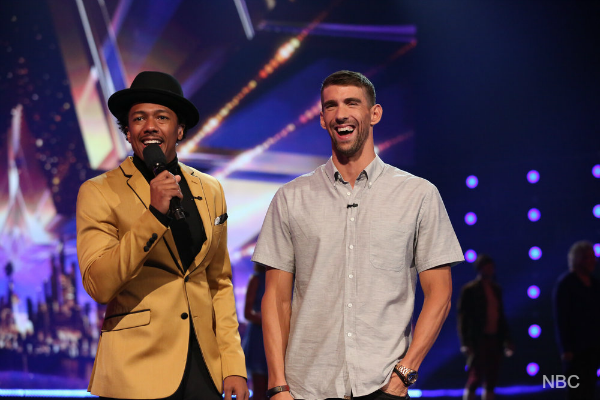 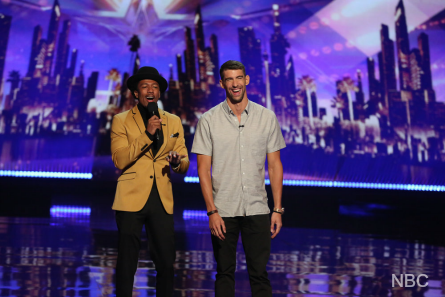 With a total of 28 Olympic metals, winning six gold and one silver this year, swimmer Michael Phelps was introduced by host Nick Cannon on the AGT stage to well deserved overwhelming applause to The Dolby Theater live audience and AGT judges. The crowd roared “USA! USA” over and over.

Cannon asked Phelps, his special co-host of the night, to describe the moment after he won his 23rd gold metal. Phelps answered, “It’s so here…that moment, all the emotions came out. I was happy with my career and was able to retire the way that I want to. The happiest was because my first child was up there.”

Cannon then asked Phelps “what drives you to succeed?” Phelps replied “I hate to lose. I started setting goals at nine years old. I said I wanted to change the sport of swimming and wanted to do something that no one’e ever done before.”

The first business of the night was revealing which three acts were in the bottom. They are the sixth, seventh, and eighth acts in place. Theses would be the acts that America would vote for in the “Dunkin Save.” After that, the judges would decided between the remaining two.

The bottom three acts (in no particular order) were revealed as: Linkin Bridge, Malveo, and Ronee Martin. As the acts stepped forward on the stage, judges Mel B. and Simon were visibly shocked as they looked-on.

Cannon then turned to his co-host Phelps and asked about his fandom of the show. Phelps said that his family watches AGT every night usually after dinner and “it’s cool to watch the acts do what they love and with passion.” 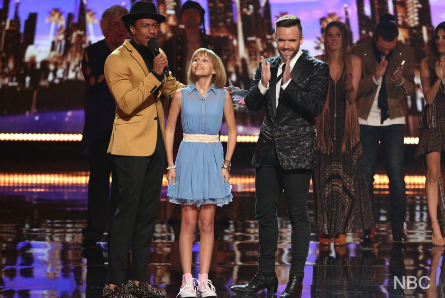 With six spots, Cannon called the next two contestants out to the front of the stage. He called out singers Grace VanderWaal and Brian Justin Crum. Thankfully, America did NOT loose either one of these singers because they BOTH went through!
Howie described these act as “epic, and wonderful and beautiful!”

Simon responded to the good news – “they are a higher level of talent that we’ve ever had! I think we are looking at the finals right now!” Simon said he was annoyed with Nick because he almost gave him a heat attack by bringing both acts onto the stage as if one of them was going home. Simon also noted, “No matter what your age is, you have to aim to win.”

The next three acts that were called-out to hear their fates were: comedian Julia Scotti, contortionist Vello Vaher and family music band Edgar. The act that was announced to go to the Semi-Finals was Edgar! Mel B. said their performance the night before was “perfect from start to finish.”

Cannon asked Phelps what his advice is to the acts who are moving on to the Semi-Finals. Phelps advice was to “try to enjoy the whole experience. These guys have prepared for this for a long time. Just get out there and have fun!”

AGT showed a fun segment with the judges in honor of the Olympics. First, Second and Third place podiums were set-up on stage. Cannon showed cards to Simon Cowell with various questions asking him to rate the other judges by placing them at either podium. The first was “who has the worst accent?” Mel B. won this in first place while Heidi took second and Howie on third.

THE DUNKIN’ SAVE VOTE:

After that, the Dunkin’ Save acts returned to the stage. Again, the three acts vying for the one spot were – Linkin’ Bridge, Malveo, and Ronee Martin. The winner of the Dunkin’ Save was Malveo. Malveo said “thank you and we are happy to be here.” Simon agreed with America’s choice. “It’s a tough competition this year. You’ve got to improve. you’ve got to get better,” he stated. 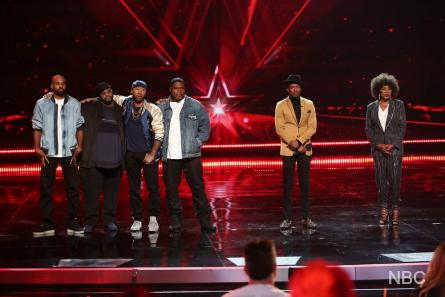 The judges were left to vote on either singing group Linkin’ Bridge or solo singer Ronee Martin. They all made comments before voting.

Mel B. was first and said to Ronee, “you send your heart and soul out and you’re a classy lady. Linkin’ you have an amazing story. This is so not fair.” Mel B. voted for Linkin’ Bridge!

Howie said “Ronnie you seem like you’re already a star. You’re already doing it and you’re making it. Linkin’ your story and your voice is so inspritaional. You are so surprising. For me, the show is about surprises.” He also voted for Linkin’ Bridge.

Next, Heidi said, “I love Linkin’ Bridge. And Ronee you have been waiting for this. She voted for Ronee. The next vote would be the deciding one.

Simon said he was disappointed with Linkin’s song choice the night before. “My vote is with who will do better in the Semi Finals.” His deciding vote went to Linkin’ Bridge. 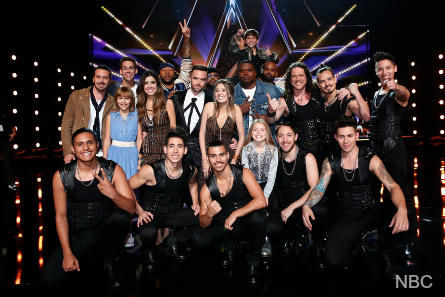