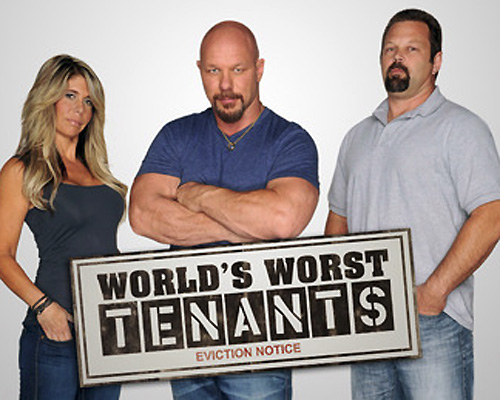 I found this gem of a reality show today airing on Spike TV called “World’s Worst Tenants”. The series centers on a trio headed by Todd Howard who is a former Marine and property management expert. Working with Todd is his wife Randye, and his friend Rick Moore. They are hired by landlords to roughen-up unruly and un-abiding tenants of apartments, houses, business properties and even boats.

In the episode titled “Rub A Dub, Big Man In a Tub”, Todd and Rick are called out to a property after a tenant, who typically pays his rent on time, is a few days late. What they find is this obese renter stuck in his tub after falling down in it. In another incident, all three members of the crew enter a landlord’s apartment property to make the “annual inspections” of each unit in order to cite any tenant violations and up-keep or lack there of. While doing so, they are made aware of a possible gas leak. When they go inside of the unit in question, they discover an elaborate set-up for voyeurism. The last conflict that they have to resolve is a renter of a gym who they discover is using the commercial property for illegal behavior after dark.