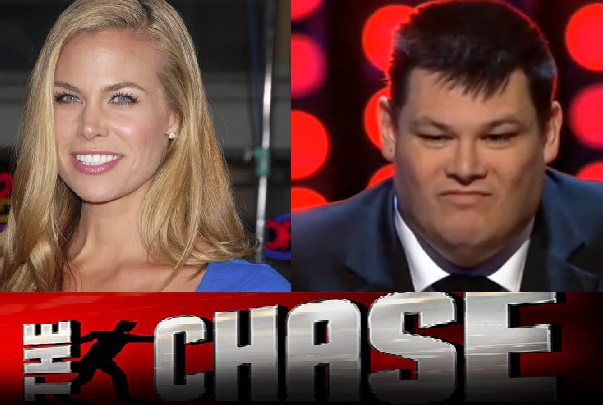 EXCLUSIVE! Set Report! Spoilers!
Popular ITV, UK game show “The Chase” has traveled to America with only one of its four Chasers courtesy of GSN. That would be “The Beast” Mark Labbett. The other three, Shaun Wallace, a.k.a. “The Dark Destroyer”, Anne Hegerty,a.k.a. “The Governess, and Paul Sinha, a.k.a. “The Sinnerman”, did not make the leap to the Americanized version of their show.

Another change? Good news for the contestants on this GSN version, instead of earning $1,000 per correct answer during the rapid fire questions cash builder round which is the first round, the contestants earn $5,000 per correct answer. The questions are still difficult, and contestants looked terrified enough to make it apparent that they were out of their comfort zone especially while in the presence of a smack-talking Labbett, a 6 ft 6″ mathematician and quiz game genius taunting them while attempting, and mostly successful at taking their money.

EXCLUSIVE photos from the set of THE CHASE here!

Hosted by Brooke Burns (Dog Eat Dog, Hole in the Wall) who stands at 5’8″ holds her own very well against Labbett who even challenges her intellect at times when he refers to her from time-to-time in a condescending (but always playful) way by calling her a “beauty queen” because of her success played upon her fortunate good looks. Burns, who is more than just a pretty face, also very intelligent, has great chemistry with Labbett and anyone can see that they get along tremendously well.

Once a contestant has earned their money in the first round, they must face “The Chaser”, or in this version, only one Chaser who is “The Beast” in order to keep the money, or play for a different amount. In the U.K. version, the money amounts vary from what they build-up in round one which could be anywhere from $1000 to $10,000, to what they are offered from The Chaser which seems to be random numbers for example $1,000 or $20,000 or more from The Chaser. This is similar to when The Banker offers money to contestants on “Deal or No Deal” game show.

In the episode shot of this American version of “The Chase” as one contestant stood before “The Beast” just before the start of the “chaser round” (which is now referred to as ‘beat the beast’), Labbett told the contestant, “Do be afraid. Your instincts are telling you I am to be feared!” The contestant said he was in the top two contestants. Labbett replied that “the top two remain British.”

Intimidation didn’t seem to get the best of this contestant because they managed to answer all of the rapid fire questions (eleven of them) correctly earning a total of $55,000 which was played for keeps in the next round if they could beat “The Beast”, or take-on a different amount to try and add to the cumulative contestants pool that they all play for in the final round. The contestant said that they intended to go on a trip if they won.

In the Beat the Beast round, this contestant was given the option to either play for the $55,000 earned in the first round, $20,000 or $125,000 which is what The Beast offered this contestant to start at two steps ahead of him and they would have to answer six answers correctly. During this round, the contestant must answer correctly, if not, they lose a step towards the money. Too many wrong answers, gets them out of the game completely and they go home. Both the contestant and The Beast must lock-in their answers within five seconds of each other.

Each question is presented with three multiple choice answers. Some examples of questions were: 1) In nautical terms, a league is a measurement of what?, 2) Author Alexandre Dumas’ grandmother was from what Haiti country? 3) What does a “franking privilege” give Congressional workers permission to do? A question and answer example is, “The Biblical character Balam had what? – a) talking ass, 6) burning bush, c) withered rod.

The second contestant to challenge The Beast won $20,000 in the rapid fire question money builder round. This contestant’s goal was to have their wedding vows renewed in Lake Tahoe if they won the money.

The Beat the Beast round offerings were $75,000 to answer six questions correctly but getting the closest steps to beating The Beast, $20,000 to answer five correctly, and $5,000 requiring four questions with correct answers. The contestant sought-out the pool of contestants for advice, the same format a in the U.K. version. One said, “I think $75,000 is not enough. I say go for $20,000. We want you back here.”

What viewers who have watched the UK version of “The Chase” will immediately notice is how much more of risk-takers the American contestants seem to be by playing for larger amounts of money against The Beast. Most contestants on the UK show play for only the small thousands of dollars that they earn in the first round.

Upon getting in front of The Beast, the nerves started talking over as the contestant fumbled some answers, and answered the first question incorrectly, only to come back with the right answer. Burns stated, “we have to take your first answer.”

The GSN Senior Vice President of Programming, David Schiff said that producers of the show come-up with “arbitrary” numbers for money amounts during the Beat the Beast round based on number of factors that include how well the contestants do in the cash builder first round, where they were in the show during their game play and what they are playing for. The network ordered eight one hour episodes and two were filmed per shoot day. Schiff said that they decided to use only three contestants instead of the UK’s four because of the time constraints and paid advertising time to consider into each episode, as well as getting more of The Beast’s personality into the show.

It was noticeable while watching the show that Labbett does serve almost as a “co-host” to Brooke Burns. This new added banter with the show host is joined with Labbett’s current long-winded explanations to answers that he also gives in the UK version of the show.