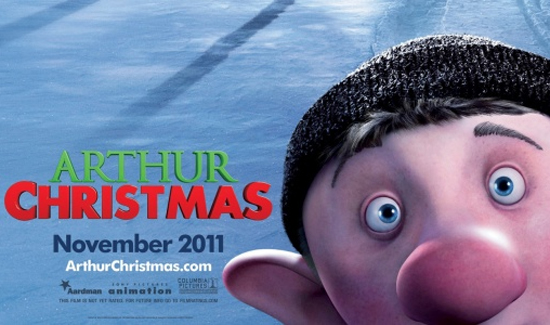 In Sony Pictures new animated 3D, CG holiday feature, the burning question regarding Saint Nick is finally answered. “How does Santa manage to deliver all of those gifts to children all over the world in just one night?” For “Arthur Christmas” it’s a high tech answer explained through this story of where modern technology meets the old-world of analog with an adventurous world-wind…literally.

Before the actual film started, audiences were treated with a special “Arthur Christmas” music video, “Santa Claus is Coming to Town” by Justin Bieber. 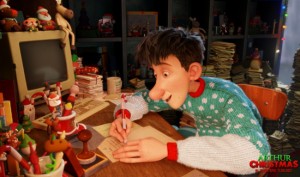 “Arthur Christmas” (named after one of two of Santa’s sons – Arthur) opens with the writing of a letter from Gwen in London, England who questions the existence of Santa Clause. She writes- How can you get down the whole world in one night. “I don’t see your house on Google Earth”. Arthur writes back that Santa Clause is sure to get to her house before sunrise “using his special magic.”

Soon after that promise does Santa’s eldest son, Steve, who is also head of “Mission Control” the high-tech Star Trek-like operation suited with a stealth present delivery vehicle in the form of a space ship, makes the most unimaginable mistake that none of the thousands of elves can fathom, missing the delivery of a gift to one child’s house, Gwen the writer of the letter who was motivated to prove to her friends that Santa does exist.

Preparing for retirement after a 70-year run, and passing the torch down to Steve, Santa counts the remarkable number of successes with pride and decides, along with Steve, to non-emergency the event. Having the opposite reaction, Arthur sets-out on his journey to deliver the present with his grandfather via his sled “Eve” that runs on magic fumes inhaled by the famous reindeer.

Their travels to find the street, Mimosa Av. begin in Denmark ET all throughout Mexico, Tanzania (Africa) with Man-Eating Lions, and Cuba, all in a two-hour time span. The film is very comical, smart, and original. “Arthur Christmas” invents a new phrase that is sure to catch-on in real-life pop culture. For the elves, a code red is when there is a “waker”, or a child that suddenly wakes during the night while they are in the room. A very funny scene was played-out having Santa trapped on top of an electronic noise present. The situation was handled in bomb patrol style.

In this time of a recession/depression, “Arthur Christmas” is a welcoming up-lifting animated movie that reminds everyone what it really means to have the “Christmas spirit”. It’s not about a gift at all, but about caring so much about making someone happy with the gesture. In a gadgetry-filled, obsessed world, this is a great reminder to our youth that it’s the simple and authentic things that count.

“Arthur Christmas” opens in 3D in time for Thanksgiving on Wednesday, November 23, 2011.