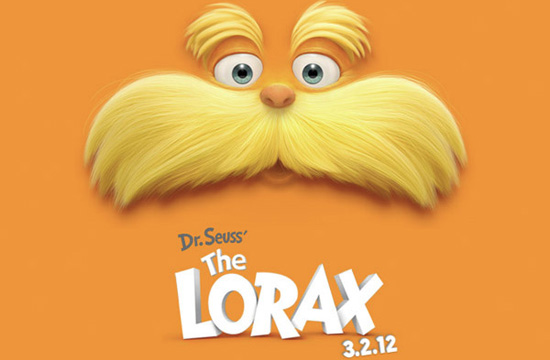 “Dr. Seuss’ The Lorax” is an updated version of its own television cartoon written by Kenneth Chisholm called “The Lorax” (1972) about the telling of the story of an industrialist who turned a lush tree filled environment into a wasteland in order to mass produce his fashion product.

In the updated version, “Dr. Seuss The Lorax” in 3D, it’s the re-telling of a very similar story. When a young boy, Ted (Zac Efron) falls for a girl, Audrey (Taylor Swift) who lives down the street, there’s just about nothing he wouldn’t do to capture her heart. They live in a town called “Theneedvile” that has no trees. They rely on store bought tree replicas which don’t have the benefits of photosynthesis that produces fresh air. The town’s zillionaire, O’Hare (Rob Riggle) made his fortune on this fact by selling bottled fresh air with his “O’Hare Air” products. 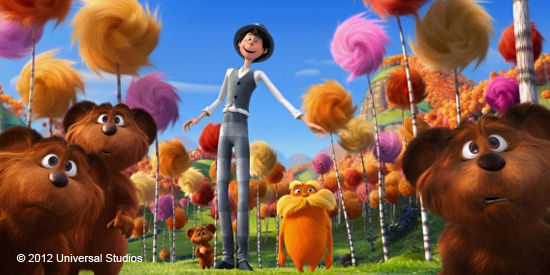 The Once-Ler with The Lorax , Brown Bar-ba-loots, Truffula trees.

When she shows him a mural of trees that she painted in her backyard and tells him that she would marry the first guy that brought her a tree, or “Trufulla”, it turns Ted’s world into a frenzy as he focuses on where to get a real tree for her. His grandmother, Norma (Betty White) remembers a time when trees were plentiful and tips him off on where to find out how to obtain a tree. Ted ventures off to see the only one person that can help him, “The Once-ler” (Ed Helms) who lives high above the devastated, grey and barren land without fresh air that he is responsible for.

As a young man, “The Once-ler” harvested the Trufulla trees to use their colorful, cotton-candy like textured tops to make “Thneeds”, a product that can be used at fill any human need- a scarf, an umbrella, a hat, even a tight-rope. His pitch tag-line is “everyone needs a Thneed”. With the first chopping-down of a Trufulla tree, brings “The Lorax” (Danny DeVito) the guardian of the forest who warns the Once-Ler to stop his greedy commence, anti-environmentalist ways.

“Dr. Seuss’ The Lorax” is a great reminder to children of the importance of conservation and preserving mother nature and animals. In the Dr Seuss’ case, it’s the Humming-Fish, Swomee-Swans, and Brown Bar-ba-loots bears that thrive in the natural Thneedville land.

The colorful palettes used in “Dr. Seuss The Lorax” is very true to the classic picture books I remember as a child. The 3D effects was a fresh and welcoming change at the beginning of the movie but faded as the movie went on and ultimately the movie stood alone without the need of it.